Hacking has been around since early pre-alpha 2013, and while the early Alpha releases have dozens of commands you can use to achieve various effects, I've always considered the system a work in progress. There are more things that can be hacked, a few tweaks and changes to expect, and furthermore there are three major categories of hacks, and before Alpha 4 we'd only seen the first!

These three categories run the spectrum from common to obscure, in that order. So with Alpha 4 we've begun exploring the second category. Don't worry, there are still more improvements and features to come in category 1.

The concept of "unauthorized hacks" was first introduced in relation to Garrison Access systems. These are hacks that attack the system itself or abuse it in some way, decidedly not what you're supposed to be doing there. They are always entered manually--you'll never see these listed like the others.

SPOILER WARNING: Beyond this point I'll be revealing how to do each hack and how they work, even though you're meant to learn all this via in-game lore! However, right now the necessary lore only exists for one of these hacks--respective lore for the others cannot be added until I create the part of the world where much of it will be found. Reading this will allow you to get around that temporary roadblock and check out this new content, but doing so doesn't make it any less spoilery! Your choice :)

Unauthorized hacks can be divided into two sub-categories...

With Trojans you install a program that runs on the target system to provide delayed or continuous long-term benefits. You'll want to make sure the machine itself isn't disabled, since that will of course render the Trojan useless. Once planted Trojans will continue to operate even if you are traced, however.

There are eight Trojans so far, affecting either Terminals or Garrison Access systems.

Installing a Botnet Trojan at a terminal. 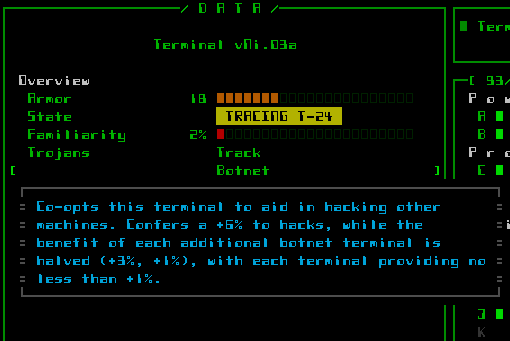 Machine info lists the currently active Trojans, and allows you to call up context help for each.

Oops, Mr. Programmer, looks like you should've taken a left at the Subcomponent Replicator. (Nuclear Reactors previously infected by the Detonate Trojan--they glow yellow so you know/remember which ones they are).

A "brute force" hack completely disregards stealth and overwhelms the target system to achieve some effect, rendering it useless in the process (permanently locked). While brute forcing a system is guaranteed to attract attention, it's quite easy to do and allows for some more extreme benefits.

There's plenty of room for more unauthorized hacks in the future. This first batch was just a medium-sized "side project" alongside Garrison Access, to enable some additional strategic options for that machine.

So, given an infinite amount of time, by entering a bunch of random strings, one could conceivably find a hidden code implemented but not mentioned? seems like i have my weekend ahead of me ;)

Hahaha...does your weekend somehow contain an infinite amount of time? :)

Seriously, in theory, yes, though doing so would be quite annoying since you're traced quickly. All will be discoverable when the time comes. In a recent stream of the game I showed one of the secret hacks, but it's a pure Easter Egg with no meaningful use. There are a few others with interesting effects--two of them give you viruses "which are pretty cool" :D. I haven't started working on that third category for real because it's dependent on story/NPCs which have only just begun to be added.

All unauthorized hacks, on the other hand, have been revealed via/as of this post. I've already come up with some new ones I'd like to add soon, but may not announce them.