Update on the future of Turnover world design and pixel art design.

To me, Level design is one of the tougher aspects of creating a game. When I’m coding, I have a very definable goal: does this system work as it should as fast as it can? Is this entity doing what I intend it to do?

When working on game worlds, the goal changes to “Is this fun?” It’s a pretty overwhelming question. I could have a different opinion for each day of the week depending on when I play through a world.

With a sneak ‘em up, I am constantly trying to come up with enough varied setups of “a person trying to sneak past stuff.” “When will the player be sick of doing this specific action?” “Are these bad guys timed up enough to force the player to be careful and watch the pattern?” Since the goals are ever shifting, it makes me nervous as hell.

One way I have decided to approach world creation is not to think of the floors as a level-as-a-whole, but more of a collection of sneak/puzzle situation. Some floors will adhere to a theme, but ultimately this lets me just make up mini-scenarios that I think will be fun. It gives me some direction, opposed to just filling a world up with things to do. Now, I can piece together multiple situations per floor, flow them together, and have something that works. It seems successful so far.

My approach to art with Turnover is an implementation of pixel art. 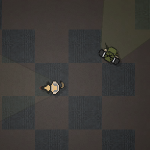 The sprites are still a work in progress, but I’m adhering to a semi-isometric point of view, which gives me some flexibility of perspective. 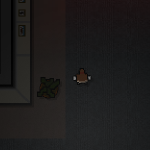 I wouldn’t call myself artistically inclined and this style doesn’t make me feel limited. I can do some things flat top-down or add a little perspective tilt to give some depth. Most importantly, I don’t cringe when I look at it, so I must be doing alright. 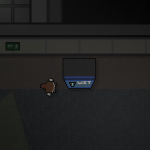 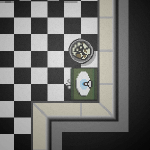 This week, I’ve also fixed up a number of bugs and added some new game play scenarios, such as interaction between the Turrets and the Sentinels (the guards). There are some situations now where the player can use the Turrets against the enemy. There will be some negative trade off to doing so, but it open the gameplay up a little more.

I also revisited my path finding system and rewrote some of its memory-based functions. I was able to shave ~2MB of memory usage off of that system. Aside from loading up the assets, my path finding system is the subsystem that has the highest memory usage, so the change was a big win for me. The rewrites also improved the average frame rate. Score.