Turnover’s closed beta build #3 has been pushed to Steam and is available to testers. This build is a pretty significant update from beta #2. Nearly everything has been touched on. Audio design, difficulty, animation, bugs, gameplay, and usability have all been addressed in some way.

Turnover’s closed beta build #3 has been pushed to Steam and is available to testers.

This build is a pretty significant update from beta #2. Nearly everything has been touched on. Audio design, difficulty, animation, bugs, gameplay, and usability have all been addressed in some way.

I’m currently accepting more beta testers into the fold. You can sign up here: Turnovergame.net. Sign ups will be open for couple more weeks.

I want to give a shout out to all the testers who have provided feedback so far. Thank you, everyone!

Here are some details on the major changes & additions in Beta #3.

The most significant piece of feedback I have received from testers is that Turnover difficulty was leaning into frustrating territory. Turnover was always meant to be challenging, but the idea that it was frustrating concerned me.

In response, I have addressed the core difficulty as a whole.

A few players variables have been changed to make getting around more forgiving. Mostly, the player’s fatigue level has been reduced and certain cool down times have been lowered.

The new mechanics of the Attack Dog have changed him in three major ways:

All of this results in a more effective and balanced tracking enemy.

In addition to a new noise actor, the creaky swivel chair, noises in general all have a greater sound radius. This means enemies have a better chance at detecting your noises. This also means that enemies can be distracted easier.

Previously, a dispenser had a certain number of items to dispense. You could dispense each object rapidly, giving yourself a pile of things to throw around.

This presented two distinct problems. One, limited stock means if you used them all up, you would be stuck if you needed to distract an enemy. Two, rapid dispensing means you could dispense a bunch of items quickly and use them to get out of some situations a little too easily.

To address this, dispensers now have unlimited stock. But, the more you use the dispenser, the longer it will take to restock. This discourages snap dispensing and prevents players from becoming stuck in an area.

If the GIF above, you can see the dispenser slowly fade in as it is restocking, then a HUD alert popping up when it is ready to go.

Fire had major issues in beta #2. There were bugs that would cause enemies to become fixated on fire. Also, friendly NPCs could be called into it, burning them to death. That has all changed, as I have completely rewritten the mechanics of fire, fixing all known bugs.

Here are some points about fire in beta #3:

With this, fire now works as I had originally envisioned.

I made some common sense changes to various levels to give the player more chances to hide, make certain areas more dangerous, and fix pathing and hunting issues. Nearly every level has been revised in one way or another.

Turnover also has a new end game scenario involving a “boss fight”. I’ve also cut out one level that just wasn’t working. Altogether, the flow of the game should be much improved.

As detailed in a previous dev blog post, Turnover now has a main theme, composed by Jeremiah Pena. You can preview it here. It’s a great piece, so give the preview a listen!

Also, beta #3 has a brand new sound mix. This means I went through the game and calibrated the overall dynamic range of the sounds, to ensure nothing was too quiet or too loud, and that everything was spatially correct.

I’ve made various other changes that should improve Turnover as a whole, both for gameplay and user interactivity.

If a window steals focus from Turnover, the game should now “halt” and give the focus to the demanding window. So, if you get a Skype call or something, the game should yield to it gracefully.

You can now also alt+tab and the game will pause fine. The Steam Overlay should now also halt the game.

The level intro is quicker and can be skipped. You won’t have to wait so long after dying to get back to it.

This mostly affects the end game levels, which have specific objectives. A HUD hint will pop up when an objective is complete, and will inform the player how many objectives remain. 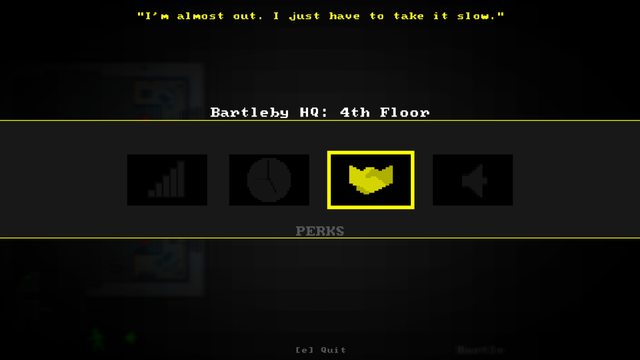 I’ve added a small hint to the pause screen to show when you are in a level that has a hidden unlockable perk. I originally wanted the perks to be completely hidden so the player would have to search for them, but I eventually came to the decision that a hint was needed.

In addition to what I have detailed –

Now, I’ll wait for some more feedback from testers. I have an internal release date set and I am working diligently towards finishing the game.

I think Beta #3 might be the last major beta milestone. Everything I wanted to be included in the game is now in. Addressing issues and improving things further will be my focus from here until release.

i did send application you and i heard nothing back

Thank you for signing up. I'll be sending out more beta keys soon, likely today.