So, as the Steam Greenlight campaign is coming along I'm proud to present new Trigger Time demo 0.25. This is a huge update, lot's of changes this time.

The game now has a logo instead of its name typed in some cool font, here it is:

Playtesting of the game showed that some physics puzzles, especially those that are at the very beginning of the game, can be pretty hard to solve. That's why puzzle hints were introduced:

Puzzle hints are basically question mark and an arrow that appears near an area that needs player attention. Puzzle hints themselves do not make puzzle solving easier, the player still needs to figure it out, but now he doesn't need to wander around guessing: "is that some sort of puzzle, do I need to do something here" 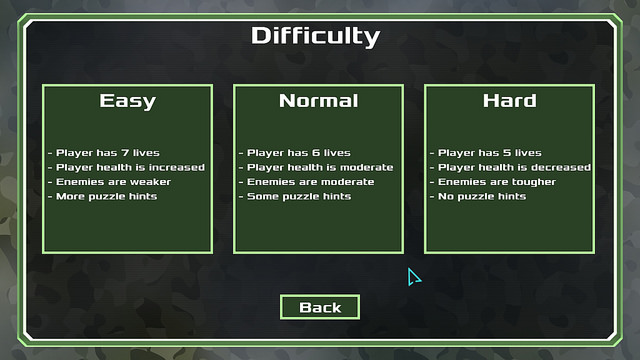 So now the game has 3 difficulty levels, campaign progress is per-difficulty, that means if you play the campaign on "normal", you can't just start playing it on "hard" from the middle, you'll have to play from the start. As for the difficulty levels themselves:

You don't need to do anything special, just plug in your gamepad and start playing. The game will detect that you're using the gamepad and act accordingly. e.g. it'll display input hints for gamepad instead of for keyboard+mouse. And if you want to change gamepad button bindings or deadzones, you can do this from the options menu: 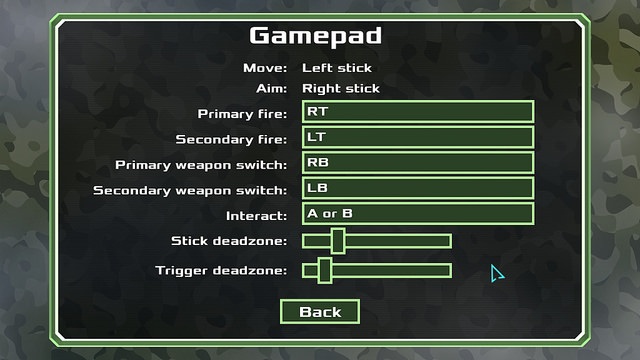 Please note that gamepad support was tested with xbox 360 compatible controllers only. The input hints inside the game are given for xbox 360 buttons too. So if you have PS4 controller or alike and experience problems, please let me know.

For me, art was one of the biggest pain points in the whole project. But finally, things are changing! So far the following art was updated:

And there will be more updates in the future, the plan is to update all art that's currently looks like it's out of place.

Some people complained that the game can be pretty dark with some displays, that's why brightness settings were introduced: 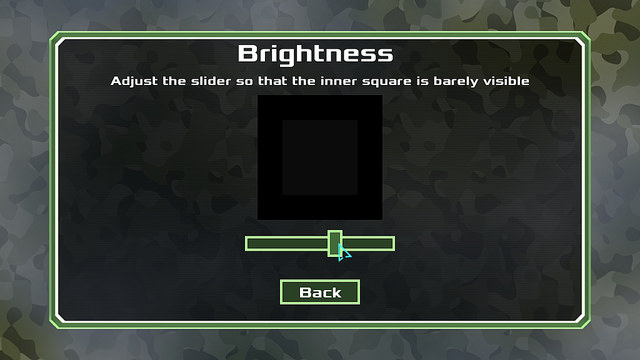 Shotgun is the only gun that didn't have muzzle flash attached to it and also, the buckshot trace effect was misbehaving on impact, it was disappearing instantly. That's now fixed by attaching the muzzle flash and adding alpha fade to the trace:

Here's the game profiling data before/after LuaJIT in a script-intensive place. Game CPU usage went down from 20% to 10% here:

Though it's not that important on PC, it can be a huge win on (possible) future mobile port.

Some level polish and bugfixes

I also did some level polishing and fixed a couple of bugs. Here's the list of most important things:

"The factory" level got shorter

3rd level in the playable demo contained a very long and annoying part that was extremely difficult, the player would usually die there once or twice. It was entirely stripped from the level, now you just head straight to the door control room:

I've looked through all the game (not just demo) and changed intensities of light sources that were causing very bright white spots on the floor. These looked ugly, hopefully, all of them are now gone.

"The mine" level ambient light increase

2nd level in the playable demo was way too dark, so I've increased its ambient light from absolute zero to 0.05. I've also increased player flashlight intensity. Now that level looks and plays much better

In some certain, hardly reproducible circumstances machine gun bullets got frozen in air when shot by certain enemies. This was due to initial bullet positioning code was tied to 'render' callback, not 'update'. This is now fixed.

It was possible to open the same dialog box twice by clicking the menu button several times without moving the mouse. Bug is fixed.

So, I guess that's it for this really huge update. You can download new demo in "files" section as usual. If you have any feedback or problems, please write about it in comments section.

Also, the game is still on Steam Greenlight, so if you like the game and want it to be available on Steam, please vote here!