For this update I've been mainly working on a major overhaul of the diplomacy system. I think it now fits in better with the direction the game is going, I'll talk more about that in a moment.

Posted by PokingWaterGames on Nov 23rd, 2015

For this update I've been mainly working on a major overhaul of the diplomacy system. I think it now fits in better with the direction the game is going, I'll talk more about that in a moment.

In the previous system we had sending scouts off the map, and buttons to perform "Actions" like taunting or attacking other tribes. It was becoming very complex from a programming perspective, and I found it wasn't very engaging from a gameplay perspective either. Sometimes you would order a person to go scout, they would have another more urgent desire along the way (like being attacked by an animal) and it would cause edge case AI problems that took ages to troubleshoot. The interface required for diplomacy missions would also have required a lot more work as more Actions were added. It started to feel like a separate system from the rest of the game, rather than an integrated part of it.

So I threw that away, salvaged what was still useful and built a new mechanism for diplomacy with neighbouring tribes. It's a two-stage system that I think is pretty unique. The first stage is Discovery. This is when your tribe doesn't know about the existence of other tribes. You have to do certain things within your tribe for these foreign tribes to notice you and increase their discovery level.

Each foreign tribe has a set of 'influencers' that affects how quickly they discover your tribe. For example, one tribe might have smoke from fires as an influencer, so the more fires you start, the faster their discovery level increases. Another tribe could notice there are less animals in the area due to your overhunting and decide to investigate (well, they don't actually investigate but their discovery level increases). 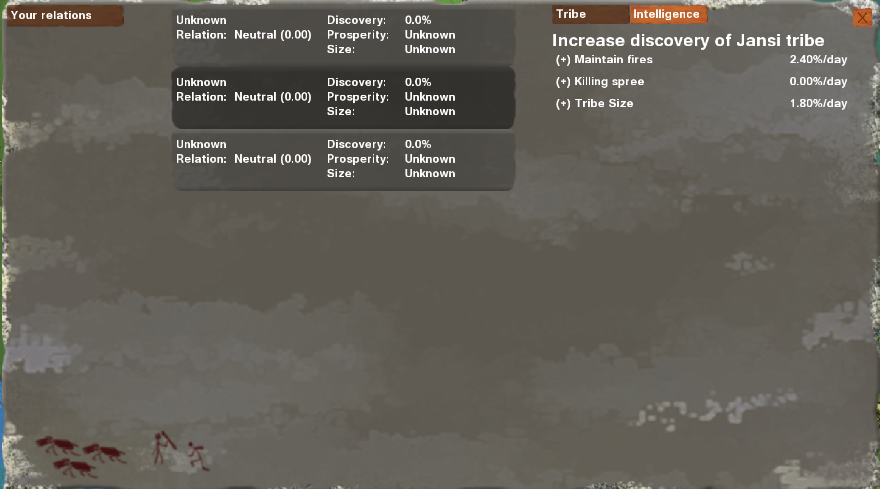 Note that all these influencers are tied to things you can affect on the game map. It builds on the core game mechanics like starting fires, hunting, etc which I think works way better than the previous system.

Once a tribe's discovery level reaches 100%, the second stage commences. This is the relations stage. The influencers that previously affected a tribe's discovery rate now affect how that tribe feels towards you. For example, let's say the number of fires is an influencer in the Discovery stage. Does that tribe feel inspired by your control over such a force of nature, or threatened by your pyromaniac tendencies? This will affect whether they like you more, or hate you more. 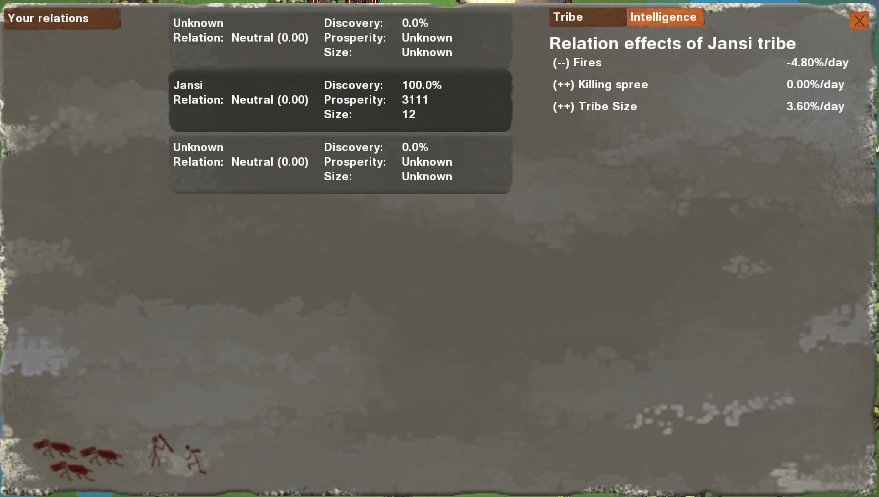 So that's the big change in this update. I've also made various balance changes, visual improvements and the usual bug fixes. A full change log is listed below.

Haha it wasn't supposed to look like that, I swear