There Will Be Ink is now available on Steam (Early Access)! In addition to that, a new update has been released, Beta 1.1, with some interesting new features, enhancements, and fixes.

There Will Be Ink is now available on Steam (Early Access)! In addition to that, a new update has been released, Beta 1.1, with some interesting new features, enhancements, and fixes. Oh, and there is a new music track, featured in this brand new trailer. Check it out!

The game’s Steam page can be found here:

And the game remains on itch.io as well: Summitfever.itch.io

Alright, onto the new stuff! 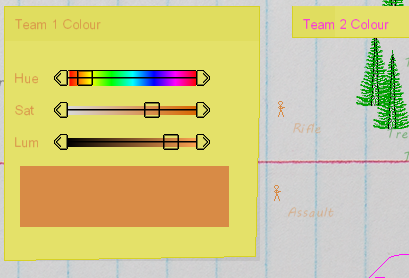 Team colours can now be adjusted in the map editor using a set of sliders, one each for hue, saturation, and luminosity. This allows for a little more creativity and customization. Along the same line, I plan to add alternate paper and background types as well. 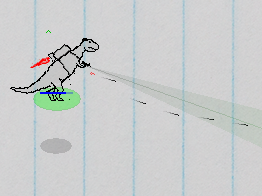 I’ve had it in my mind for a long time to add a T-Rex with a jetpack and an uzi to the game, why not? At last, the day has come! I haven’t quite decided whether to make the T-Rex a full time, regular unit or not, so for the time being [SPOILER ALERT] it comes in the form of a mysterious crate powerup. The T-Rex is unlocked once the player defeats 100 enemies. From that point on, with each kill there is a 1% chance (plus an additional 1% for every 1,000 campaign kills) for a T-Rex crate to drop. The T-Rex has a lot of health and is equipped with an uzi (new). Instead of going prone, the T-Rex has a jetpack (obviously), which uses up stamina. If the T-Rex falls from high enough, it will create a shockwave that damages nearby troops, enemy or friend (and if there is enough force a crater is left).

Campaign progress now tracks whether a mission has been completed in Arcade mode or Sim mode, with a silver ‘A’ star for the former and a gold ‘S’ star for the latter. Completing a mission in either mode will unlock the next. For now the stickers are mostly for bragging rights, but I may introduce unlocks (powerups etc) or achievements based on them in the future.

Here also are some other things!

I’ve got a lot of ideas in queue, and much work to be done on what’s already there, but I’ll also be listening closely to player feedback to address any issues and possibly implement any new ideas that fit with the game. Please send all comments, ideas, questions, and insults to hi@summitfevergames.com. I’d also love to play any maps that players might make (typically found at %localappdata%\ThereWillBeInk\Maps\).