I woke up late Wednesday morning on the 2nd of January to have a cardboard box thrust into my arms while I was still groggy.

I woke up late Wednesday morning on the 2nd of January to have a cardboard box thrust into my arms while I was still groggy. Somehow, I managed to blearily focus on the shipping label. "Shipper/Exporter - OUYA" OK, now I was wide awake. Damn that was quick. I'd gotten a notification that the OUYA had shipped on the 28th of December 2012, and I'm used to abysmal shipping times. I have never received an international package within 4 days of it being sent. Fantastic. I grabbed a phone and told Kam he *had* to have a video keepsake of him opening it.

The unboxing didn't exactly go to plan, so we ended up getting 2 minutes of Kam flailing about and the sound balance being completely out. (Apologies for the phone noise early in the video, however you could consider it as being a preview of our level up sound effect.)


Soon after that excercise in silliness, Kam ran off to his office room to tinker with the OUYA and to see what it could do. I'm not particularly technical so I'll leave it up to Kam to write up a tech post of his own. He must have done something as later that night he had the current alpha version of Barubash up and running.

Currently Kam is busy with benchmarking and optimising performance for the OUYA. I'll leave you with a photo of the OUYA dev kit and controller, with an XBOX 360 controller and PS3 controller for size
comparison. 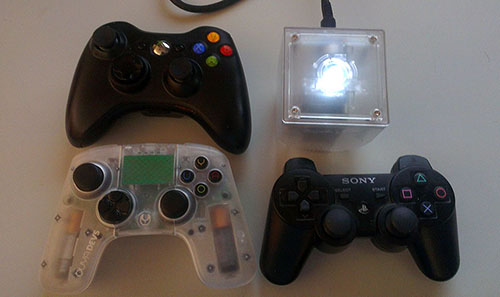 It is pretty big, and it's only slightly lighter than the XBOX controller. However the weight distribution isn't too bad and sits alright in my hands and controls are within comfortable reach. (I have tiny hands) The shoulder buttons feel oddly squishy. I'd love it if the final controllers could be a touch lighter.

I also found the touch pad a little disappointing. Needs a bevel and it acts like a mouse instead of mapping to the screen, might be able to access via the API though. Still need to get right stick running but beyond that looks fairly good.