Post news RSS The completion of the Margonem MMORPG world

We have completed the virtual world. It's like the boarders of the realm will look like. Maybe with small changes here and there, but the major part is constant now. 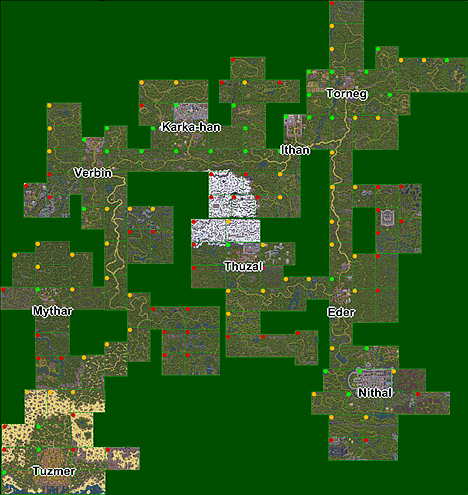 This rather crude map means that we stated the boundaries of the
Margonem realm. However, we don’t see it as something definite, something that
cannot expand and change. Change in positive sense is fun and we hope that our
players think the same way.

Every section of the map, every rectangle or square is a separate
main location. The size is usually the same. The places differ in the manner of
the lay of the ground, climate, plants or human (and other races) creations.
That’s why it’s easy to notice forests, meadows, swamps, fields, deserts, snow
covers and towns on presented map.

The last towns to add were Tuzmer and Thuzal. They are similar in the
name but not so similar in nature. I’m somewhat proud of Tuzmer, the harbor
town. It’s something completely different from other parts of the realm. Here
meets all kind of people, sailors, adventurers, merchants, sellswords and many
others. This gives a scriptwriter a great opportunity to spread his wings. On
the other hand Thuzal is a place of knowledge, religion and arcane. Here is a
seat of the influential university divided into three guilds. However, the town
runs its errands in constant threat of hardy barbarians attack.

Towns are also the safe haven for all the adventurers. Here no one
can harm a player unless he visits an arena for a sparring. The colorful dots
on the map inform about PvP status. Green maps are safe, on yellow players must
consent to a fight, on red - everyone can attack everyone. The last ones usually
concern the most dangerous location with many, powerful monsters.

Finally I’ve prepared some numbers that can give you a better view. In
Margonem there are about 150 main locations and about 1000 smaller ones:
interiors, caves and dungeons. This world is filled with creatures and
inhabitants, so there are a lot places to visit and a lot of NPCs to talk to.
Something for the real explorers.