I make sure to put a lot of work and realism in the lore, backstory and overall picture of Therium-2's story. One of the things that I'm particularly fond of is the calendar system for the Cinderbreathe Empire.

The Cinderbreathe's officials need a system to track each day of every year, so they created a calendar. While most citizens of the Cinderbreathe City only keep track of the current month, the officials keep records by writing down the day of each month.

The Empire, however, does not have a system for time: everyone simply says 'sunrise', 'afternoon', 'nighttime', etc.

There are five days per week. Thudar, Wurdar, Sadar, Tondar, and Reidar. Breaks off of work are usually allocated to Reidar.

There are four seasons: Spur (Spring), Sail (Summer), She (Fall), Wick (Winter). Each season is split in halves: Helm, and Doth. The two names are combined: Spurdoth is the second half of Spring, and Shehelm is the first half of Fall.

Spur is celebrated throughout the city, as a symbol of luck and happiness. As the snow melts and the sun starts shining again, the rabbits are all filled with hope: they've survived another winter. There's not much left after Wick, so the rabbits make do with what they have to make celebrations.

Sail is when the city thrives, as it becomes a bustling bazaar filled with heat and fresh fruits. There are two festivals held for trade in both Helm and Doth among the citizens and other species: cats from the Arliss come to sell jewelry and Dogs strike deals for their iron wares and weapons. There's never that much to be sold, though, as most of the trade from the foreign caravans is saved for the much more wealthy and pompous Arliss Empire.

She marks the extreme amounts of work to prepare for Wick: the guard force is half working on actual guard duty, the other half working construction in whereever necessary. As celebration cools down, so does the air.

In Wick, the celebration dies. Because the Cinderbreathe are so far north, the winter is colder and harsher than it is to the Arliss Empire, who live in the South-East. Most Guards are extremely busy cutting firewood, harvesting food and melting water to keep the city and Empry's citizens alive. Because of the barebones guard enforcement, bounty hunters replace the officials and crime becomes more rampant. Thieves can take anything that's left out in the open, and a bounty hunter will almost always be your best bet for justice.

Therium-2 takes place in the 41st of Spurhelm, 672. The Cinderbreathe Empire have devoted resources into extending into the Therium, while recovery from Wick takes a backseat. Most of the snow has melted, and the sun is rising once again, but the air is still cold...

You'll be able to see a calendar like this in some outposts, where the Cinderbreathe are planning to stay for much longer. Areas like these are clearly important: only officials check which day it is.

The order of the lines signify which month has passed: first it's Spur, then Sail, then She, then Wick. 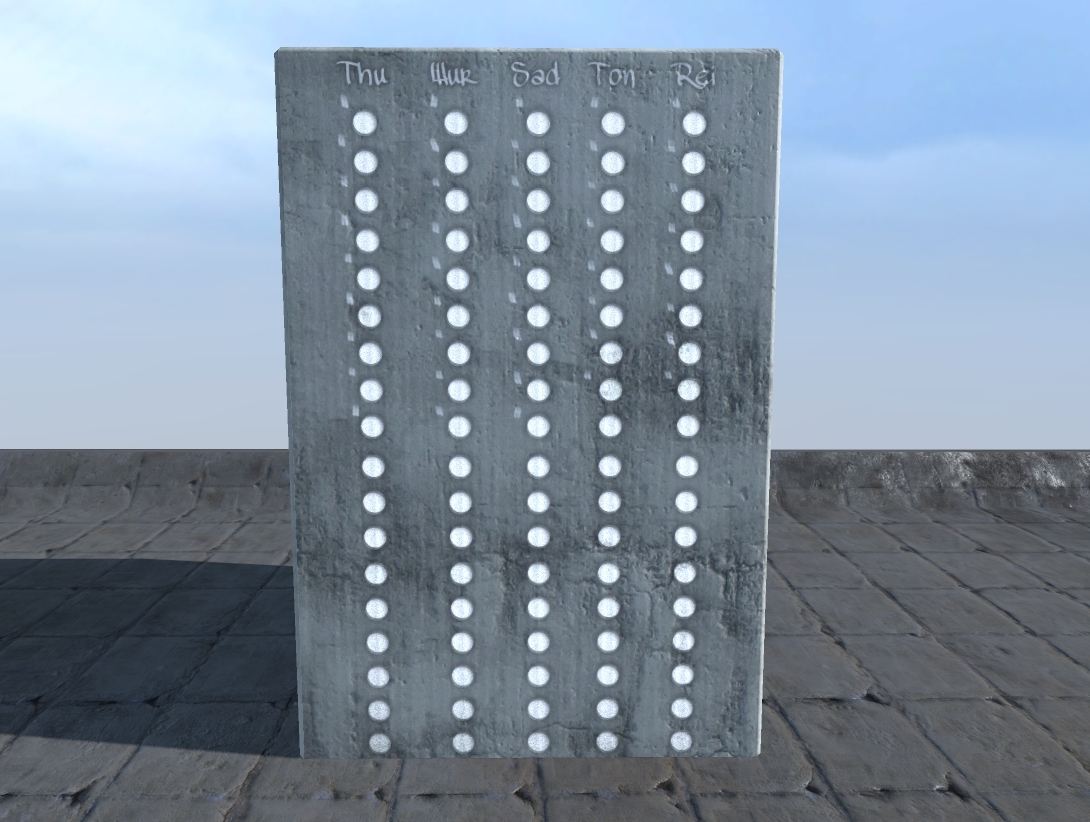 (Texture isn't final.) On this calendar, you can see it's the 43rd of Spurhelm (on a Sadar).

I came up with a very complicated way of telling the year, but it's better to let you figure out how it works than me specifically telling you. I hope you can figure it out. It's pretty clever.

Hopefully that can give you an idea of how in-depth I am with the lore and inner workings of Therium-2. The game will actually have about three fictional languages that are spoken by different societies, but I won't explain those.

Sorry for not posting for a month, but like I said, I've been doing quiet development, and I can say that the end to Therium-2's development is in sight.

The game's Alpha stage is nearly ending. I only have a couple of gameplay levels to complete, and then I'll be able to enter Beta stage. This means polish, bug fixes, optimization, and completion of all the cutscenes and secrets of each level.

You might be asking yourself, "this seems awfully quick for a near-release post". Which you probably aren't thinking at all (I've been working on this for a while). As for why I'm able to say how close Therium-2 is to being finished, I'll explain in a different post (don't worry, it's nothing bad).

Rolands has been working on more models. I might upload images of them to the Media section soon, but they're mostly background props for detail and environmental storytelling, so they're nothing -too- fancy or high poly. Unless, of course, a set of handcuffs, a hatchet, a key, some rope, a bed and a compass are absolutely fascinating and mind blowing. In that case, call me Molyneux.

I have a bit more to post, so I'll see you soon.