Swipecart is finally ready for alpha testing! This has been a part time project for the last year made by a one man team while juggling a full time job and family. Version 0.0.11 features the first world of the game with 30 levels and 10 bonus levels, along with the in game editor allowing players to create their own tracks. These can be uploaded and played by others through the event selection menu.

Feedback is very welcome as this is the first ever public release, so expect future versions to improve upon any rough edges or missing quality of life features.

The game was originally planned only as a mobile title but the PC version is being developed at the same time as a way to test the waters. Note: Gamepads are supported, outside of menus during the gameplay.

Check out the official site at Swipecart.ca or read on to see a list of current features.

Create a driver profile and take the first step towards competing in the prestigious Global Swipecart Cup. As you compete across a variety of tracks each with their own obstacles and challenges, you will gain fans that boost your ranking and open up new possibilities. Compete for the best times in order to gain gold medals on each track. Compare your times to those worldwide with the global leaderboards, as well as individually with your friends. Also try for gold medals in the score attack and infinite runner modes. Use the Swipecart social network to add people to your friends list and directly compare stats and times with them. You can also use the in game mail system to send messages and trade gear. User created levels can also be easily shared with friends through the mail system.

Fans provide you with money, which you use to purchase gear to customize your driver. You also collect gem fragments as you navigate the rails, which combine into gems which can be sold or exchanged for services. Collecting all gem fragments on a track also rewards you with an extra gem, giving drivers a reason to strive for a perfect run. Visit SwipeMart to browse the latest selection of helmets, carts, and wheels. With dozens of styles to choose from in a wide variety of colors and themes, you're free to ride in style. You can then swap out your gear in Larry's garage, where all your sets are stored. With so many items to choose from, drivers are rewarded for finishing complete collections. Additional cosmetic items will be available to those who can finish up these sets. In addition, you don't have to dress just to impress yourself. Access your Racing License online, allowing you to share your stats and your style with the world. 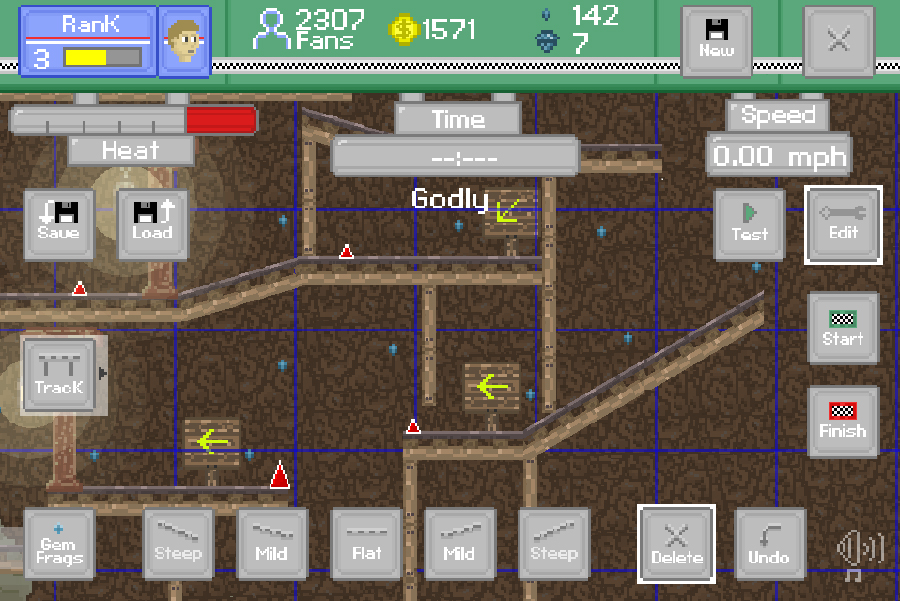 Create your own custom tracks using the in game editor. Place track, obstacles, decorations and gem fragments with ease by snapping pieces together. Save and load your creations, and test them on the fly. Change the appearance and theme of your track or allow or deny certain abilities to change the difficulty.
Upload your finished tracks to the Swipecart servers for anyone to compete on. From there, share your tracks easily with the in game friends list and mail system, or share them on the internet through a link.

Play your driver profile across multiple devices. Play on multiple PCs, or move the action to your mobile or tablet (mobile versions coming soon) and keep playing right where you left off. Play wherever you want with whatever you have in hand.

Cool game needs some work though.