this Version features an all new alien planet, a completely revamped Docking System, and a lot more stability thanks to bugfixes, and a complete makeover of the block logic system.

Welcome to the all new alien like purple planet. Enjoy the view at it's procedurally generated rock formations, and it's toxic green atmosphere. Go explore in the new and improved caves.

As the docking system didn't really work, a complete makeover was necessary. I build a system that dynamically fuses any number of physical objects together into a larger structure, which allows for full hit detection. This means: no more glitching physics when ramming a wall with a docked structure. I also rewrote the complete docking orientation, and constraint system.

To use docking, you have to place a docking module. You can now change the orienation of that module in advanced build mode by pressing WASDQE. The orientation will change relative to the cameras position. The arrow INSIDE the yellow block preview indicated the current orientation.

You can edit a docked ship, but if you make the ship bigger then the docking area, it will automatically undock.

The freedom of rotation as a docked ship is now restricted to what you's expect from a turret. There is still some overlapping possible, but I'm working on that. The orientation also deceides the axis of the docked ship. If you need for example a turret on top of your ship, you need to orientate the docking module to point to the top. The docking texture does not yet represent the current orientation, but that will also soon be fixed.

I spent most of the last week rewrite some core functions of StarMade, specifically the block logic structure, which handles block grouping and the functionalily of usable blocks. It also handles the connection structure of blocks. I have redone the system to be extremely abstract, which in the end eliminated houndreds of sources of errors. The game is also now a lot more scalable, since the new system is more streamlined.

There have been over 50 smaller bugfixes since the last update. Since stuff like random crash fixes, etc, are not very interesting, I'll pick out the most notable, and bugs that have been reported on the forums for the following list: 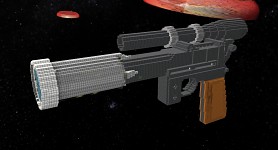 This awesome ship was made by Asharad.

Thanks for playing StarMade,
- schema

after I click OK the game window opens, then closes alone, what's my problem?

that might be a graphics card problem. you can send in a report with the tool in your starmade directory called CrashAndBugReporter.jar (double click it)

I love that purple planet, it just looks fantastic!