I am really happy how the levels play out. The levels have to be advanced but the gameplay itself is fun and the way I wanted it to be. I am not happy yet with the star map. It is still a menu as some of you mentioned. This will be the biggest construction yard in the next weeks. Altough…it got much more fun already…check out the new version.

I also want more focus on updates for ship, player weapons, add more reasonable items, fine tune some features and add some new ones and remove others which are not so much fun. Please take a look.

Star map (meta game):
I could not get the progression right yet. Right now it works like this: Do random encounters to collect resources (which works quite nice) and do linear missions (one special ship after another) to progress through the game. This is ok but could be more fun. One part plays the map itself (right now its search and beat) but very random.

The player would get one of these goals randomly when starting a new game to have variety and get the missing ones after another.

The current problem is that it is somehow fun to uncover the current map but not as much fun as it could be. Part of it is space itself. I as a designer can place harming nebula but I can’t embed strict easy to understand rules like on a map on earth where I have clear rules (need a bridge to cross a river, may have problems crossing mountains, forest hides enemies, roads allow faster travel and so on).

I have problems hiding goals on the current map (its easy to uncover it; making goals visible once I have the mission is kind of weird on such a small map) and I have problems embedding choke points. Another problem is that I would see all enemy movement once I uncovered the whole map (which is easy to achieve). 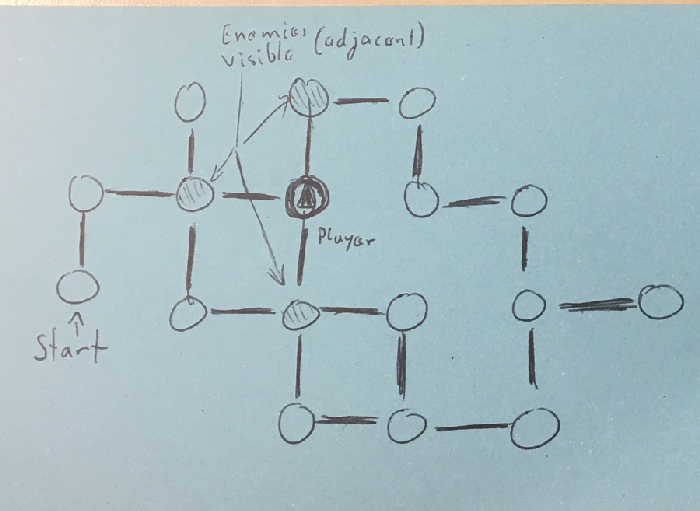 It would be more fun to get those encounters from an NPC as missions and not just run randomly into them. This NPC would give you rewards if you would find a special item or kill a special person in this location.

It costs right now 2000 credits to do so which does not make sense. I will remove that cost and rather limit scanning to 1 scan (which can be upgraded up to 3 scans per encounter) per encounter.

I am pretty sure that I will remove fuel from the game. It’s is not fun right now even if I give more fuel out (which is in current demo). It’s not adding much unless you travel from let’s say a galaxy to a galaxy and work for the fuel amount in that location/galaxy. The player would need to know how much fuel is needed to reach the next goal and plan for it. Right now its random and not fun.

It is a bit weird that enemy ships are always boarded when encountering them isn’t it? I don’t want to add a crazy huge new system but I am thinking about adding a light fighting mechanic. Your ship and the enemy ship has hull and shield. You can fill up to 3 different slots with weapons and board the enemy (or flee anytime) when the shields are done (laser weapon attack lowers enemy shield). The attacks can be triggered each x second per weapon (cool down). 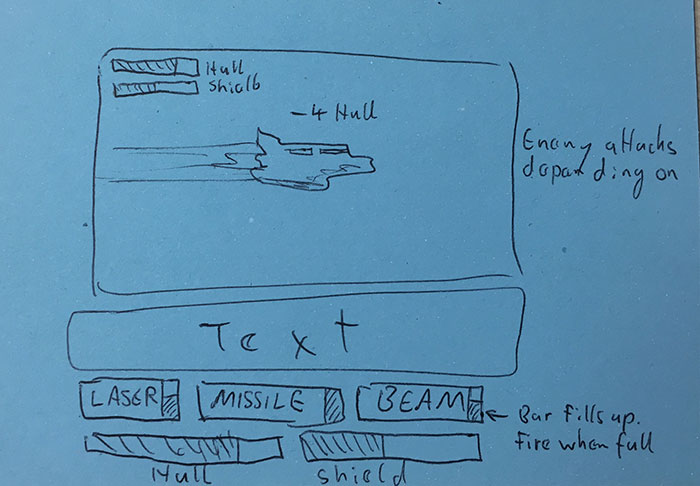 Features to work on:

Dying when leaving space ship:
The player is right now sucked into space when not walking on a tile. This can happen when massive explosions damage the vessel for example. This is an “ok” mechanic but frustrating when happening at the end of a level.

Proposal:
The player sprite will automatically use a spacesuit when leaving any ship (aka not being on a tile). Air will only be available for a short time. This will still put the player in a dangerous situation but does not mean instant death and also allows for nice puzzles and secrets (“will I reach it in time?”). I have to figure out how the movement will be to have a bit of a realistic touch (slower, always slow left move?).

Upgrading is fun. I want to add more upgrade states to the laser gun (firing rate, damage, critical chance) and various ship upgrades as well. This should boost midterm motivation.

It is a fun and underused mechanic. I need to fine tune it and include more puzzles. I guess slower spread and longer burn time is a good starting point.

I have not played Fallout 4 yet but I like the idea of having a special armoured suit (to use when you are stuck in a level for example or just to have a blast once in a while) which you have to craft (find 4 parts before use) and for which you have to find energy cores to use it.

Disable turrets which should at the player or let them should at enemies.

I want to add legendary enemies which appear in levels (like a strong pirate, alien or commander with a special sprite) after scanning enemy vessels. A skull icon will be added to the UI which will be a new parameter). The type will also give better rewards.