So, again we bring plenty of AI, vehicle and control fixes, check out the change log for the details, but the highlight of this release is our brand new map, Sainte-Anne! 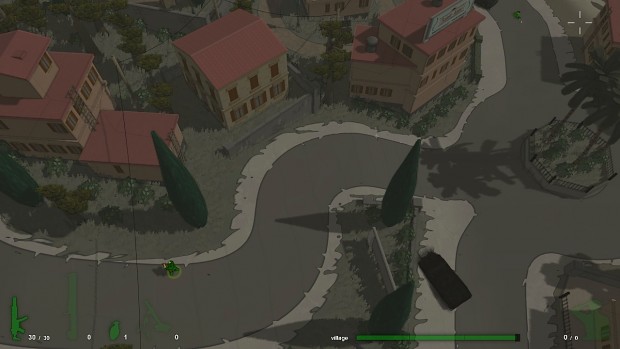 We also have the initial steering implementation in now for vehicles in water, with Sainte-Anne featuring a few drivable rubber boats. AI currently neglects them pretty much, the navigation logic needs a bit different approach than the on-ground vehicles, looking forward to work on that for 0.81. Hope I can squeeze in the "AI battle-taxi" feature for that too, can't wait to get into some beach assault action!

Also, the online servers now support persistent player profiles (per server), which means that if the server has been set to store the profiles over battles and map changes, you can have your stats, rank, mortars and weapons with you again when you reconnect. One of the official modulaatio-servers will be soon set up as something we call Invasion; players only join Green faction, they all start with 0 XP to fight through all the maps in randomized order, each map starting with Green faction having one base with some over capacity to get the invasion going, with XP and items carrying over map changes.

We'll be adding plenty of new items in the near future, we've been talking about vests, rare weapons, support items and new calls logically similar to mortar strikes, which will fit the persistent cooperative Invasion mode really well!

Does it work on Linux now? The demo is broken for me because it can't find wxWidgets on openSUSE.

Hmh, that's not nice. The generation of config.xml (video mode, antialiasing and so forth), happens with the config tool made with wxWidgets, in that sense both the game and the demo depend on it.

If you're hardcore enough, you might try a little trick by creating a folder named "data" in your rwr demo folder, and copying this file Modulaatio.com in there. With a little bit of luck, you might be able to run launch_game now.

Sorry I can't do better than that at this time!

That is indeed a workaround that does the job.

questions questions. are other maps gonna include those weapon racks too?. and rubber boats to maps where its useful?