The year's off to a great start now, we've got RWR 0.77 out with a nice set of improvements! We've got the style revamp in with a refined palette, thicker grass, terrain layer outline details, selective wall texturing as I like to call it, slightly shaded character models and much better looking water. The rendering techniques went through a slew of optimizations that make the game utilize GPU's better, but we've still got plenty of those and CPU side improvements coming over the following releases. 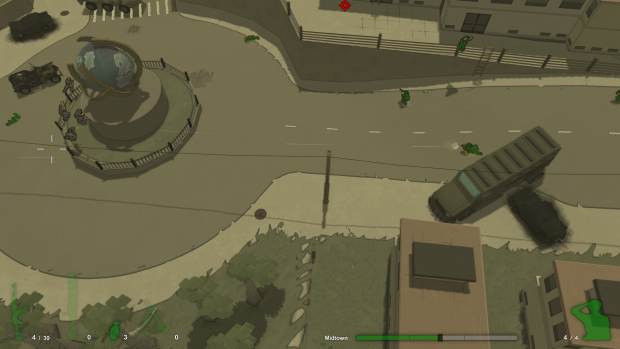 On the gameplay side we've got diving, spawn point selection through map, hand brakes for vehicles - also makes AI to ignore them, great for preventing your fellows from stealing your carefully placed spawn point truck - and the usual balance tweaks.

Insular Complex, the PvP map, is taking a break this release, we need to work on it a bit to make it suitable for AI too. A completely new map is also in the making and it's looking refreshing indeed!

It's going to be exciting to see what kind of changes we'll see in RWR this year. While the single battles the game is built around are great, we are heading towards a system that will allow playing a longer campaign spanning several map battles in an epic war, and we want to do this also in an online setting. This will of course need a lot of new maps, glad we got plenty of improvements on the map making process already, but we've got lot of ideas about other features to add that such a campaign mode would greatly benefit from.

On another note, RWR made it to PCGamer's list of 25 games to vote in Steam Greenlight, check it out! Don't forget to vote!

Also, should you be interested in the AI tech in RWR, tune in for the interview at AiGameDev.com the coming Sunday! I'll be chatting about what kind of things the AI has been eating lately.

The game is awesome online, can't wait for the session this sunday. Hopefully there will be a lot of people!

OpenCL? I want to believe.

awesome update! I love the new style and the dive :D