Ruins of Despair is a single-player storyline game with the possibility of cooperative gameplay. Events unfold in the near future, that survived the effects of global warming by breeding a special genome that allows plants to adapt to unfavorable environmental conditions. But the result exceeded all their expectations ... 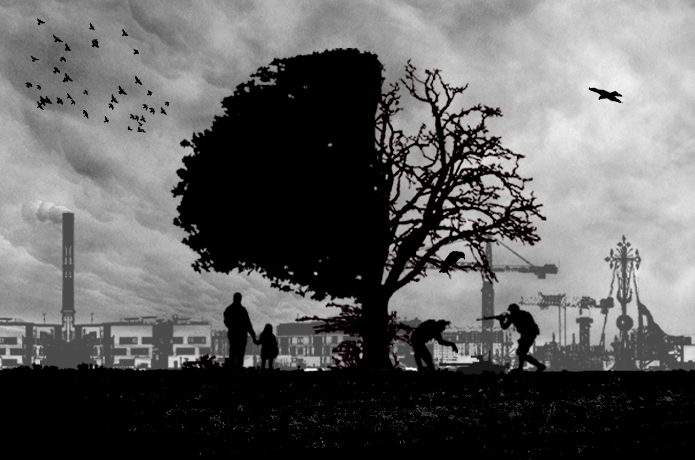 Due to environmental pollution, the planet is gradually becoming uninhabitable. At first, global warming destroys part of the crops, the rest of the animals are also on the verge of extinction, world hunger begins. Countries are fighting for fertile land, but over time it gets worse, starvation is commonplace, wars stop because of lack of food, people just live out their last days. But scientists are able to derive a unique genome that can adapt plants to this environment. Gradually everything is normalized, people are recovering from world hunger, the planet comes to a habitable state. But the genome due to the ability of adaptation and self-development mutates once in the food chain, gradually takes control of the body carrier. So there are the first infected. Just the story begins with an acquaintance with the first of them. The player will have to survive in these conditions and watch as the recently restored infrastructure collapses again.

Events unfold in the post-Soviet space of Ukraine, with the exact reconstruction of real geographical objects. The main action will take place in the city of Kiev and its surroundings.

Because of the ability of the genome to adapt quickly to the environment, the diversity of infected will be high. Each species will have unique abilities and structure of the organism, which directly depends on the habitat.

Often encountered in the early stages of the game infected will be quite primitive in terms of behavior. The structure of their body is almost unchanged, from afar their silhouette is easily confused with the silhouette of a man, but close to clearly visible differences. Because of the proximity to the plants, their skin acquired a greenish hue and was covered with growths in the form of leaves, which suggests the possibility of obtaining part of the energy for existence through photosynthesis. As a result, their behavior is divided into two stages - when there is access to sunlight or its analogues, they lead a fairly passive lifestyle similar to sleep, often without even paying attention to the noise, at other times, they go hunting in search of any food, often small animals, or, if you're lucky, something bigger. But there were rare cases when, apparently, the brain is not completely absorbed, and such creatures were able to eat food from the shops.

The main focus will be directed to the feeling of the atmosphere, that would be in search of supplies you clearly felt the danger, knowing that from any corner can get out evil, or a sense of security, when the street howls blizzard or storm began, you can hear around the howl of the infected, and you are in your equipped shelter and I'm sure that no one will penetrate it, you're all approaches barricaded, aren't you? And all the desperate who dared to penetrate the darkness, expected an unenviable fate.

The player will have to fight not only with opponents, hunger and thirst, but also to take care of their health. Timely eat and drink water, dress for the weather, monitor the quality of provisions and give the body rest and sleep. Depending on the location, there may be a shortage of one of these aspects, so, in the industrial zone, there will be a shortage of food and water, but there will be a large number of tools or other items, and once in the sleeping area of the city, there will be enough provisions, but materials or spare parts are much less. Just do not forget that you are not alone prowling in search of supplies and trying to survive, often the most dangerous opponents are not infected, but the same as you. Of course, since you are not alone, the number of supplies will gradually decrease, and the most rare and valuable items such as weapons and medicines will be almost impossible to find in easily accessible places - will have to gather the spirit and go where even the bravest does not dare to step foot. As you know, simple gun shops have long been looted.