In this article I introduce you to pressure panels, grates and electric gates, as well as the block-blocker.

Welcome to the second installment of O-R-B Articles.

In the last article I introduced you to the pushable puzzle elements of the game. Today I'll be showing you Pressure Panels, Grates and Electric Gates - but first I'll be running through a brief list of changes made to the game / game direction in the last week. Please note that O-R-B is still in Alpha, so what you see and read here might or might not change!

This is a pretty important change, and one that was not taken lightly. There are two directions that I could take with this title:

What this means to me is that you have fairly large levels, filled with at least 10 puzzle rooms with checkpoints along the way. The idea was further played upon by allowing levels to be weaved into each other - meaning that if Orb goes through one Jump gate (image below), it could at some point return to this area via another jump gate. Upon Orb's return, the level state would be as Orb had left it. This is fantastic in terms of an "adventure" style puzzle game. Playing on the idea further, I implemented a Fog of War system to hide parts of the world which Orb had not yet reached. This worked pretty well at the time, but after a while I began to miss the "crispness" of the puzzles without the fog of war.

Each level starts with a predetermined amount of energy. No gate keys (aka coloured orbs) are carried over from one level to the next. Each level has a single start point and a goal (determined by the level designer at the time). What this means is that at the end of each level, you clear it and you'll be shown your stats before moving on to the next puzzle.

I had all intentions of releasing with the continuous play / adventure style puzzle game but after my wife started churning out levels it became apparent to me that the more natural use of Orb was to create stand alone levels. That, coupled with the fact that I really don't want to "hide" the look of the levels with fog of war - I had made up my mind. Stand alone levels it will be. As with all decisions there was work to be done to support it - there were a couple of existing game elements which no longer made any sense in this context - the Goal State being one of them.

So what is the Goal State? You may enter any jump gate (or Goal) to the next level provided you have collected every coloured orb matching the colour of the jump gate. This holds true for co-op mode puzzles as well.

After what amounted to be a bit of a steep challenge and a coding marathon I finally managed to abstract my input system out of Orb (the player) into a more generic and flexible input system, something I will be doing far earlier on in the life cycle of development with my next title, lesson learnt! Why the abstraction? My goal was to allow for two players to play co-op puzzles, through either the same instance of the game (using two different input devices on the same computer), or through a network running two different instance of O-R-B.

While I have been successful in the implementation of the networking layer, there are still a few questions which I need to answer. One in particular is the challenge of how to distribute custom made levels easily through the network without having to do manual file copies from one computer to another - I have somewhat of an idea of how I intend on doing this, however this all takes time and prioritization thus co-op mode may / or may not be released with version 1.0 of O-R-B depending on a number of factors.

I have in the past week fixed many a bug, tweaked many a game element. When I start uploading the alpha versions for download I will formalize the release process and provide a change log on all changes to the game since the last version. Before moving onto pressure panels and grates, there is a puzzle element which pertains to pushable puzzle elements which I failed to mention in my last article:

One of O-R-B's puzzle elements is to prohibit Orb from pushing a block through, but will still allow Orb to go through it. This is the block blocker: 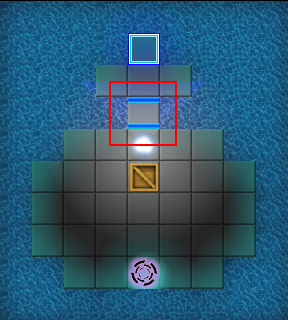 Orb may pass through the blocker unharmed at any time: 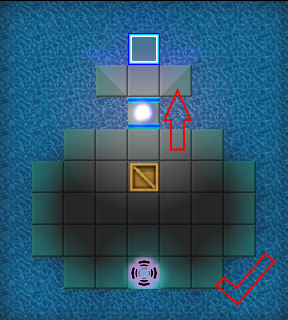 However no pushable puzzle elements are allowed through: 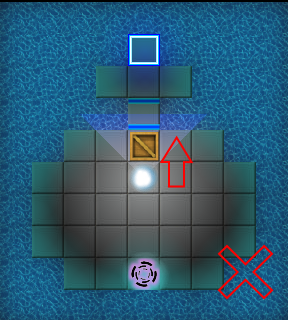 What is a block puzzle game if you don't have an element which can either switch something on or off? Enter the pressure panel: 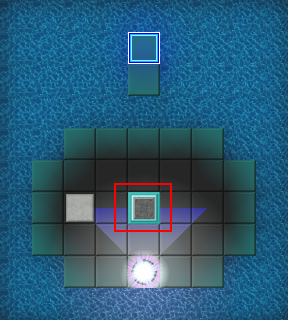 As can be seen in the image above, Orb is required to get to the blue jump gate, however it doesn't appear as though Orb can make it safely across to the goal, not at least without doing something first. 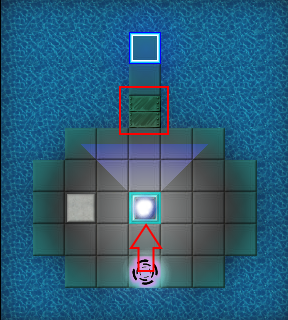 Here Orb is moved to step onto the panel. The grate is then closed allowing safe passage through to the jump gate. The problem is as soon as Orb moves off the panel, the grate will reopen: 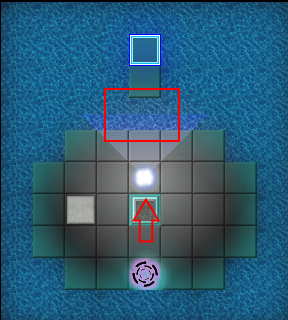 Luckily for Orb, we have a stone block here which we can move on top of the pressure panel to keep it active, freeing up Orb to do what ever it wants: 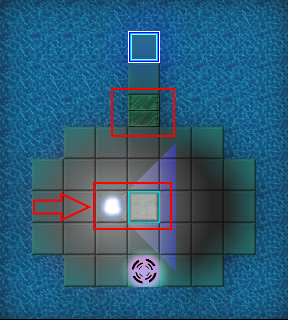 Orb may now cross safely over to the jump gate.

The pressure panel system in Orb allows for a 1:1, 1:* and *:1 relationship, what this means is that you can (but are not limited to) the following configurations: 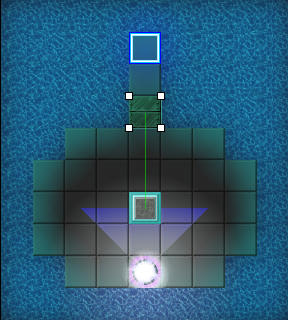 Here the pressure panel is linked in a 1:1 (one to one) configuration. Stepping on / off the panel will either close / open the grate. 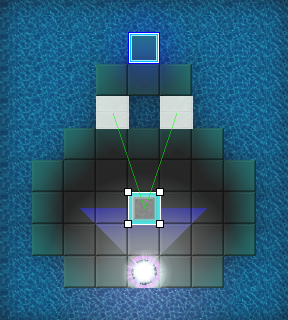 Here the pressure panel is linked in a 1:* (one to many) configuration. Stepping on / off the panel will either close / open both the grates. 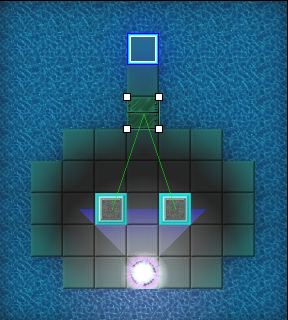 Here the pressure panels are linked in a *:1 (many to one) configuration. To solve this puzzle you will need an additional pushable puzzle element present as both panels need to be covered before the grate will open / close. 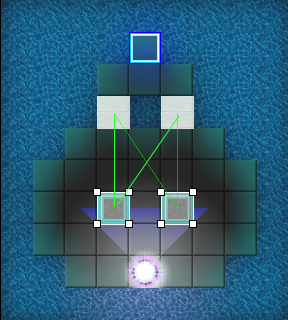 Here the pressure panels are linked in a *:* (many to many) configuration. As with the many to one configuration, to solve this puzzle you will need an additional pushable puzzle element as both panels need to be covered before the grate will open / close.

Electric gates in Orb share the same properties with that of the grate, meaning that you can use pressure panels to switch the gates on / off. However the electric gate has an additional puzzle element to it. Orb may only shoot through a gate if the pulse is the same colour as the gate. For example if you attempt to shoot a blue pulse through a yellow gate, the pulse will be blocked and you will have wasted some energy: 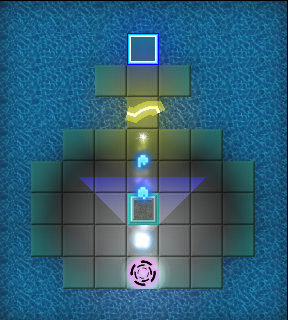 However if we shoot off a yellow pulse, the pulse will happily make its way through: 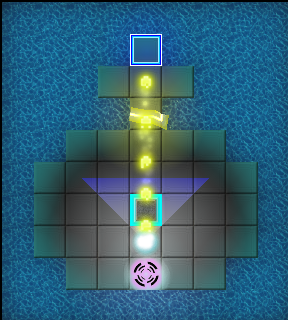 (The rule of whether or not a pushable puzzle element should be blocked by an electric gate is still under consideration so don't get too comfortable here!) 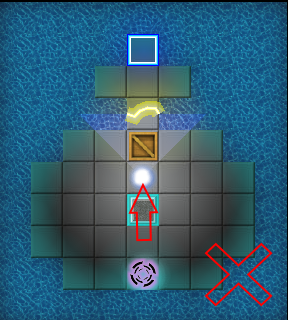 And that about sums it up for this article - short and sweet. Please join me for the next installment of O-R-B Articles next week.

Till then, happy game making!