Post news RSS [Postmotem about One-man-dev steam releasing– The Tower of Worth] chapter.2

(chapter.2)This is Postmotem about The Tower of Worth! Summary of what I've been going through for game development about two years alone and my personal thoughts.

continue from [Postmotem about One-man-dev steam releasing– The Tower of Worth] chapter.1

Problem started to occur after starting of game development.

I did programming and graphic drawing. And my co working friend couldn’t do anything at that time!

In other words, he was a very good man in promoting games.

But in initial development situation, There wasn't much that a friend could do at the moment I was just laying the foundation for the system and making images for testing.

At that time, he got a job offer from a marketing company,

Eventually, he gave up on game development and chose to get a job.

In fact, if I think about it now, it was inevitable. (If he hadn't been involved with me, he could have gone this way much faster. As such, he has a talent in marketing and is good at speaking. I'm starting to think that maybe I was forcing him to make games with me a little bit since I was in college.)

I also thought maybe it was going to be that way at the time. but when it become reality, (Even if there was no real blow to development)

I felt a huge pressure.

I know I shouldn't think about this, but I hated him a little bit at that time.

Anyway, I become One man dev and kept develop game.

My first goal was complete game develop in one year. it was nonsense.

I've got a pile of work to do, and I've do this very slowly.

Making code, draw sprite, have a test and fix bugs. It was a continuation of this kind of life.

I met my friend who I used to be with on a regular basis, talked about the current situation, had a meeting with him about improvement points, and I was able to have a change of mood and a desire to work, but it felt like something was empty when I developed it by myself.

I couldn't work effectively and When I realized, I waste too many time.

Burn-out came to me.

I becam lazybone but there was no one can stop me.

If I go like this, I won't be able to make a game for the rest of my life.

I need some solution.

I can't remember what exactly did on that time, but I asure it never need to take 13 days.

If I didn't do it, there was no one to make the game, and I was the only one to watch myself.

I decided to become more merciless to me. 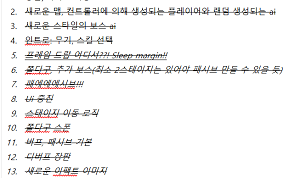 Before that, I've been set on a big goal, and I've been working on a small list of things that I need to do, one by one.

But there was no time limit. I decided to do something that I didn't do because of excuse that I can’t know how long it will take. 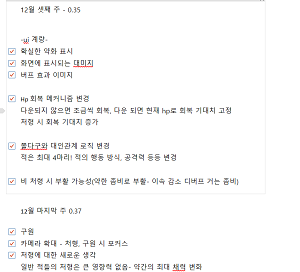 After that, I set a goal for every quarter, month and week. And tried to achieve goal.

At first time, I fail to achieve goal by various reason like too tight goal or too loose goal.

But more I do that, I can expect my work speed and now I can set a goal for every day and (sometimes) every hour.

Even though, Burn-out never disappear. At some point, Burn-out came to me and I became lazybone again.

But since I created my schedule, I've been working things much faster than before.

Originally, The Tower developed a system aimed at fighting 1:1. 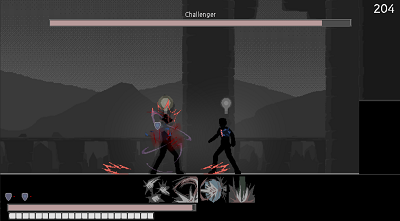 previously, the tower planned to have just full of this kind of battle.

After fighting with other challengers for 3rd and 4th times, player fight with the boss, it was a original game design. But I started to think is it too short and boring if only fill with 1:1 battle?

And after thinking about it, I decided to add a stage to fight against ordinary enemies! 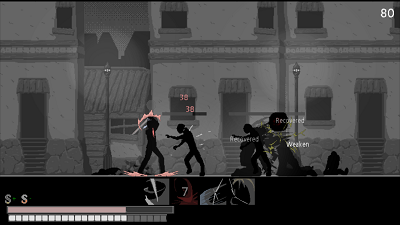 previously system aim to 1:1 fight. But suddenly I tried to make numerous enemies.

It was not a easy work to both system and game design.

Yes, I forgot about my goal of releasing game in one year, and I started to be greedy.

The more time I spent developing games, the more I became greedy and wanted to make them more interesting.

I started to plan things that I didn't even think about when I first started designing game.

I realized that the goal of launching in a year has already failed.

The features that I want to add have sprung up. New forms of enemies, new systems, skills and stages. But I couldn't make all of this.

It is time to make selection and compromise.

First of all, I needed to set most important part. And fortunately, I didn’t forget that. 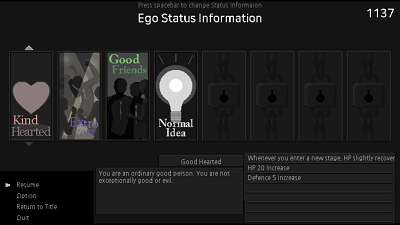 The Tower is ‘Ego Changing’ game.

Other various system must not hide this feature.

With this the major premise, I developed game with compromise.

And it's been about a year since I started developing it.

Finally, I created core system and up to 2 stage bosses.

I decide to release Demo version of The Tower.

(Continue to Chapter 3. To Game releasing…)