Natural Selection 2 Build 228 is now live on Steam. This patch fixes crash issues some players are experiencing, especially those during the "pre-caching" phase of connecting to a server. If you do experience a crash in NS2, please submit the crash report via the displayed dialog; this information is very useful for us to fix any problems quickly.

What a ride. About 36 hours ago, Natural Selection 2 went live on Steam. Now, two sleepless nights later, how did we do? It's time to take stock of what went well, what went wrong, and let you guys know what we are up to right now.

As the timer ticked down towards launch hour, we were shocked to see that NS2 was rising to the top of the Steam top-sellers list. With one hour to go, it made it. It stayed there until this morning. To say this made us happy is an exercise in gratuitous understatement. Such success was certainly unexpected. So unexpected, that we were caught ever-so-slightly off-guard in terms of servers. What happened over the next two hours was a wonderful exhibition of the strength of the NS2 community. 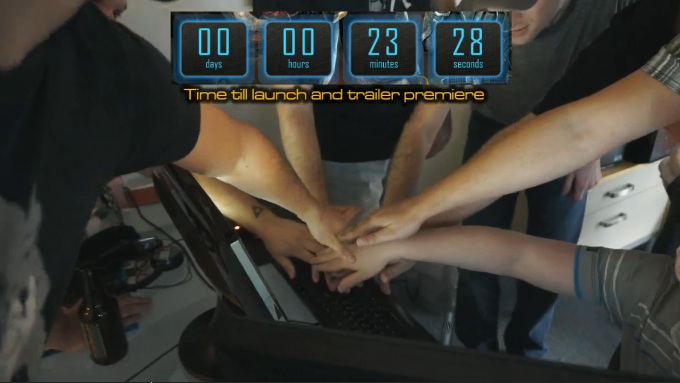 For launch, we partnered with Multiplay to provide a strong back-bone of official server capacity. They have been extremely professional and were able to meet our requirements on almost every continent on the planet. Unfortunately at launch, we did not provide them with perfectly accurate information. When we added the Deluxe Edition model to the game on launch night, a RAM usage bug crept in that sent the server process memory footprint into the stratosphere.

Through no fault of theirs, Multiplay was suddenly facing a situation in which their boxes were being utterly hammered by a game gobbling up gigabytes of RAM they should not have been. Automated processes kicked in to kill the servers, and in the first 60 minutes after launch, reports began to pour in of servers 'crashing' left right and centre. In the office, the team was starting to break out the champagne. Anyone watching the celebration live on twitch.tv/naturalselection2 will have noticed Hugh adopt a very sudden serious face about sixty minutes after launch. It was at this point we had realised what was going on with the servers.

Two groups of people then utterly saved the day. The first was Multiplay. They are a UK based company, so it was in the wee-hours that the problem became apparent. With no regard to their own sleep-requirements, they got out of bed and took our call. Over the next hour, all NS2 servers were assigned a bucket-load of extra RAM, and servers stopped shutting down. We can't thank Multiplay enough for being so responsive and accommodating in those crucial post-launch moments.
If you would like to run your own NS2 server, Multiplay is now offering them for $2.26 / slot.

Before the official servers were re-configured, the second group stepped up. At launch, there were 4,410 official player slots (since increased to over 5,000 due to the crazy unexpected demand!) and about 2,500 community provided player slots. This number boggles our mind. There are not many games that can boast 36% of their launch server capacity as community provided. Most of these community servers do not have RAM caps on their server-instances, so were able to keep running despite our 'woopsie' with the Deluxe Edition armor.

That's an effort the entire NS2 community can be very proud of.
What now? Well, first up we are aware of two nasty bugs. The first is the 'pre-cache' bug. Anyone unable to load into the game is probably experiencing this. We know it is unacceptable that this bug occurred and have been cranking on fixing it. We have found and fixed this bug, expect the patch today. We apologise wholeheartedly to all those who have been unable to participate in the launch carnage due to this.
The second is a small server memory-leak. This bug is causing servers to slowly and occasionally die a horrible, RAM soaked death. We are close to murdering this bug, but may not find it by the end of the day. If we do, we will include a fix with the pre-cache bug nuke.

Please continue to tweet issues @NS2, and post them in the Technical Support forum. We are keeping a close eye on both, and are attempting to whack-a-mole every issue that pops up, starting with the most serious (like the 'pre-cache' bug).

All told, the above hiccups don't appear to have derailed what was overall a very successful launch. For many of us here at UWE, it was our first game launch. It is terrifying. Suddenly, the game is roaring beast let lose in the wild. It is not longer a beta baby, safely coddled in private servers. So far, NS2 appears to be acquitting itself well, and getting along with almost everyone it meets.

Here are some reviews so far:

If you haven't bought Natural Selection 2 yet, I highly recommend it. - 9/10

The developers should be proud of themselves for taking such a loved mod-concept and advancing it all the way towards creating a high-quality, fully fledged multiplayer experience: A-

And here is the win/loss ratio, since launch, with 16,190 games played. 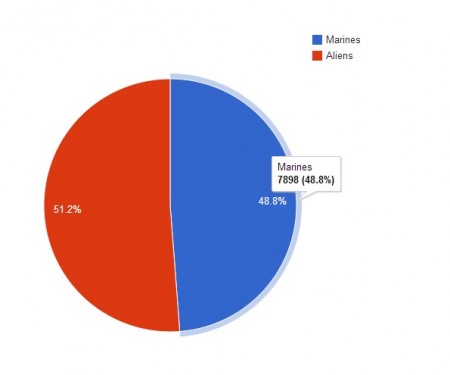 This patch fixes crash issues some players are experiencing, especially those during the "pre-caching" phase of connecting to a server. If you do experience a crash in NS2, please submit the crash report via the displayed dialogue; this information is very useful for us to fix any problems quickly.

Congratulations! It's been a truly long journey.

marines are easier to play, but aliens are much more versatile with a good team and can keep pressure on marines early game whislt the commander does all the work.

Congrats! Will be keeping in mind when we release ty.

Amazing to read. And such a good community.

Once I get the money, I will be right there with a new pc playing ns2.

That is an impressively close to 50/50 graph. I think it shows well that balance is reasonably stable, which was one of my big concerns and the reason I have yet to buy NS2 - also a fear of empty servers (that and I'm poor).

I'm hoping they'll be having it during a steam sale around black friday. If so, I am sure to pick this up.