We are bored with excessive realism so for more fun and dynamism we added some super-moves which can turn the game upside down. We've also stripped some match rules, feel free to kick anything - no referees, no offsides!

This video showcases a single local multiplayer match with super-moves in use. There will be 4 super-moves at launch: supershot, teleport, windmaker and magnet.

Without your votes there will be no Kopanito!

There will be 16 tournaments in the game: 9 leagues and 7 cups. In a league each team will play against each other team. In a cup, there will be group stage and then knockout stage. Attached are badges of all game modes.

We've managed to run Kopanito on Mac OS X and on Ubuntu (additionally to Windows) and it seems that everything works great. We'll keep working on supporting these systems. 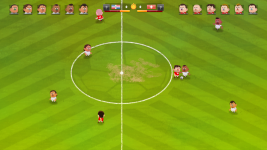 Simple practice mode will also be available with the new training pitch visible on the image.

Umm, I think there is a little tiny bug.

Thanks for info, we'll fix this :)