Improvements to drawing and collision detection/pathfinding, as well as a new and innovative formation drawing tool.

The first improvement in this update is the addition of geometry instancing to the main draw methods. This optimization has greatly increased performance by drawing all units of the same type together, rather than calling each one as if it were a different model. This change is most noticeable when there are a large number of fighter groups, since there can easily be hundreds of individual fighters on screen in a normal game. 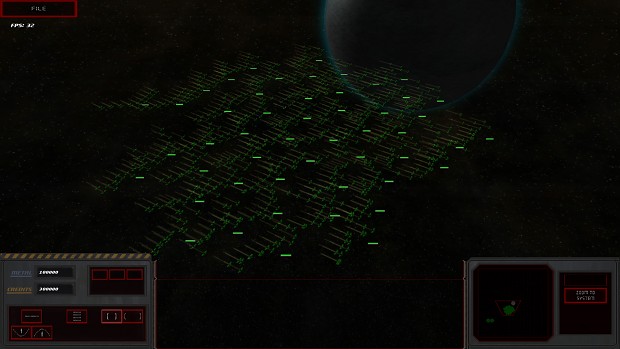 I've also added exhaust trails behind ships in order to better convey movement and direction of ships. (Plus it frankly makes the game look a lot more interesting.) In addition, thanks to some rewritten movement methods, fighter groups are now able to circle in place when not moving, which is also mainly a visual change.

In the backend, units will now move with more efficient collision avoidance algorithms, again reducing lag without sacrificing precise movement. I've also written some simple flocking behaviors, so large groups of units will move together efficiently. For the most part, unit movement is now pretty much on par with what you'd expect from a modern RTS; the player can also queue up multiple move or attack orders by holding the shift key, and even large clusters of units are able to follow any waypoint path with reasonable accuracy, intelligently altering their courses based on other nearby units. 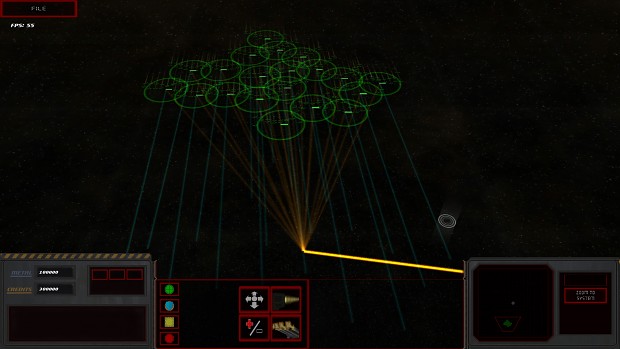 Finally, I've implemented a new formation drawing system, one that is much more customizable and all around better than the old one, which had only a few preset formation shapes. With the new system, when the player has a group of units selected he can hold down the formation hotkey (which for now is the Alt key) and by right clicking and dragging, draw a line of any shape in order to create a formation move order. Drawing a simple concave formation facing an enemy position is probably the best example of how the formation drawing system enables the player to very easily perform a useful task that would normally require many actions in other RTS games, but it allows for many other tactics as well. You can even scatter or split the selected units into multiple groups for a flank attack by releasing the right mouse button during the movement and drawing another separate line. In the same manner, the player can create formations several lines of units deep or add higher concentrations of units at certain areas on the line.

Ultimately, I think this system should elevate the level of gameplay for players of all skill levels, by providing a more intuitive control scheme for complicated tasks involving unit formations, especially considering that the largely projectile-based combat system in Empyrean Frontier heavily incentivizes good positioning. The formation drawing tool doesn't automate any of the strategic or tactical decision making, it simply enables the player to give detailed orders with significantly fewer mouse clicks.