One week left until Dwelvers Kickstarter 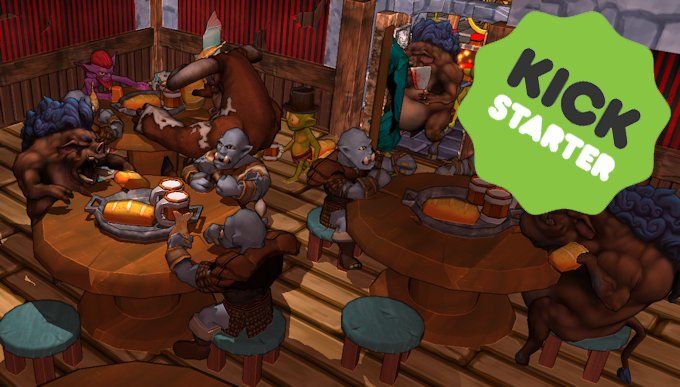 During the last week Ben, James and I have been listening to all the feedback that’s been coming in from all the social forums about the Dwelvers upcoming Kickstarter campaign. The feedback has been great and we have tried to please as many people as possible with our changes to the campaign.

You can check out the Kickstarter preview here.

For the past three years I've been working on the game both full time and half time, while attending school or while working; this time has been both fun and challenging. My goal now is to focus on slapping a "1.0 version" out on the market within a reasonable amount of time. I've made a long list of features that I want to implement in order to feel fully satisfied, and I believe that all my current and future players will feel the same. To accomplish this within a reasonable time, I need to be able to focus on the development full time for one year from now - and to do that I need stability in my economy.

Just know that 1.0 is not the final version of the game, as I will keep working on the game beyond that, but it would give me some peace of mind knowing that what's out there is good enough on it's own, and that everything on top of that is just a bonus.

But we need more feedback!

It’s only one week left until the Kickstarter campaign starts and it’s important that everything is in order and as good as possible until then; therefore I’d like to ask you:

The way Thunderclap works is that we need to get 100 people to sign up to support Dwelvers, otherwise the Thunderclap campaign fails and nothing happens. If we do however get 100 or more supporters, the Thunderclap succeeds! This means that each person that supported the Thunderclap will have their social medias they signed up with, post ONCE about the Kickstarter campaign.

This way you and everyone you know will get notified when the Kickstarter campaign goes live and will be able to check it out as soon as possible.

You can check out the Thunderclap link here.

Join us in the Let's Play livestream

We’d love for all of you to join us when I and James play Dwelvers via our livestream. James hasn’t played the game before and will ask a lot of questions regarding the basic game play and we’ll also talk about the future of the game. If we’re lucky, Ben might join us via Skype as well. During the livestream you’ll be able to ask questions regarding the game and discuss any of the game mechanics. The stream will be available via the link below the 27th of February at 19:00 / 07:00 PM (GMT+1), which is one hour before the Kickstarter goes live. We’ll try to keep the stream online for 2 hours.

What is our plan from now?

Before the Kickstarter starts we’ll try to reach all the people that have reviewed Dwelvers at some point and ask them for help with spreading the word about the Kickstarter campaign; hopefully the response will be positive and they’ll help us.

We’ll also spend a lot of time going through the Kickstarter a 5th time once we’ve got additional feedback from you guys.

During Monday we’ll need to send the campaign to the Kickstarter team for approval and during that time we’ll be preparing for the Let’s Play that we are doing during the start of the Kickstarter campaign. I need to keep James off Dwelvers so that he hasn’t any past experience playing the game before we go live.

So what do you think? We would love to hear your feedback!