Oculus lied. The 1.4 update adds “integrity checks” preventing non-Oculus Rift owners from playing exclusive titles as it detects whether you have an Oculus Rift connected to your PC.... an attempt to destroy competition with the Vive which contradicts their statement 5 months that they would be fine with fans modding the games and would not lock games to the Oculus. Only to be once again bypassed by the Revive hack that allows you to play them using the Vive. 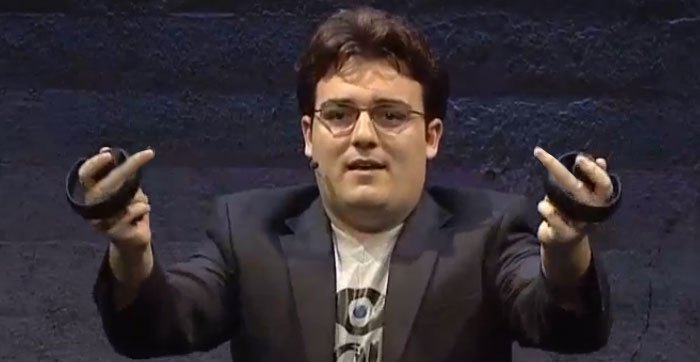 A new update for Oculus Rift has broken all support for Revive, a hack that allows HTC Vive owners to play games intended for the Oculus Rift. The 1.4 update adds “integrity checks” preventing non-Oculus Rift owners from playing exclusive titles as it detects whether you have an Oculus Rift connected to your PC.

According to Oculus VR, the update is intended to “curb piracy and protect games and apps that developers have worked so hard to make.” They claim that it's not intended to target any specific apps or hacks.

The decision to do so isn't being well-received by many gamers. Many are vocally expressing their condemnation of the move, not only due to the fact that it's anti-consumer, but also for the fact that the move directly contradicts a statement Oculus VR founder Palmer Luckey said some five months ago on reddit.

If customers buy a game from us, I don't care if they mod it to run on whatever they want. As I have said a million times (and counter to the current circlejerk), our goal is not to profit by locking people to only our hardware – if it was, why in the world would we be supporting GearVR and talking with other headset makers? The software we create through Oculus Studios (using a mix of internal and external developers) are exclusive to the Oculus platform, not the Rift itself.

The issue is people who expect us to officially support all headsets on a platform level with some kind of universal Oculus SDK, which is not going to happen anytime soon. We do want to work with other hardware vendors, but not at the expense of our own launch, and certainly not in a way that leads to developing for the lowest common denominator – there are a lot of shitty headsets coming, a handful of good ones, and a handful that may never even hit the market. Keep in mind that support for the good ones requires cooperation from both parties, which is sometimes impossible for reasons outside our control.

On another note, I disagree with most of your post, and I think you are either misunderstanding or misrepresenting several important points, but that does not change my answer.

The creator of Revive, who goes by Libre VR, says that the move is clearly intended to prevent non-Oculus Rift owners from accessing the titles on its marketplace rather than a move to prevent piracy. Speaking to Motherboard, the hacker said that while the update prevents people who don't own an Oculus Rift from pirating the games, it does nothing to prevent piracy by those who do own one.

“And this clearly excludes anyone who bought the game, but didn't buy an Oculus Rift. Even if Revive wasn't targeted, they were probably more than aware of the collateral damage,” he said.

The move is disappointing, but not terribly surprising. This approach may end up driving more gamers towards owning a HTC Vive than reward Oculus VR for its decision.

The creator of the Revive hack, which had allowed HTC Vive owners to play Oculus-exclusive programs before Rift's latest update, has now released a workaround which restores functionality to his code....

Remember that as recently as December 2015 Oculus founder Palmer Luckey had said “If customers buy a game from us, I don't care if they mod it to run on whatever they want... our goal is not to profit by locking people to our hardware” How time flies when you've got a competing product in the marketplace.