It's finally here! A Pre-Alpha Demo of O-R-B is available for download!

First and foremost, thank you for taking the time to download the concept demo and for reading this somewhat lengthy article.
While I still have a massive amount of work to do to get O-R-B to the point where I am happy to release a beta, time has come to give some parts of what I currently have in place a test run in the wild. Given that the demo does not contain all help queues, tutorials and assists - this article serves the purpose to cover those gaps. Furthermore it will hopefully provide more insight into each mechanic and element that is available in the game. Even though the demo is limited to 6 levels - it covers a fair amount of elements and mechanics that will be included in the final release.

If you have any issues, suggestions or comments about the demo please don't hesitate to leave a comment or drop me a PM.

"Orb... Once the biggest and brightest star in the sky is now just a mere glimmer of what he used to be. Orb is in danger of becoming a black hole for eternity, however he has one last chance at survival.
Legend has it that in a galaxy not too far away lies a dormant power shrine. Anyone or anything brave enough to venture into the center of the shrine will activate it and be rewarded with eternal light.
Orb's journey begins here.."

O-R-B can be played with either the keyboard or a game pad. 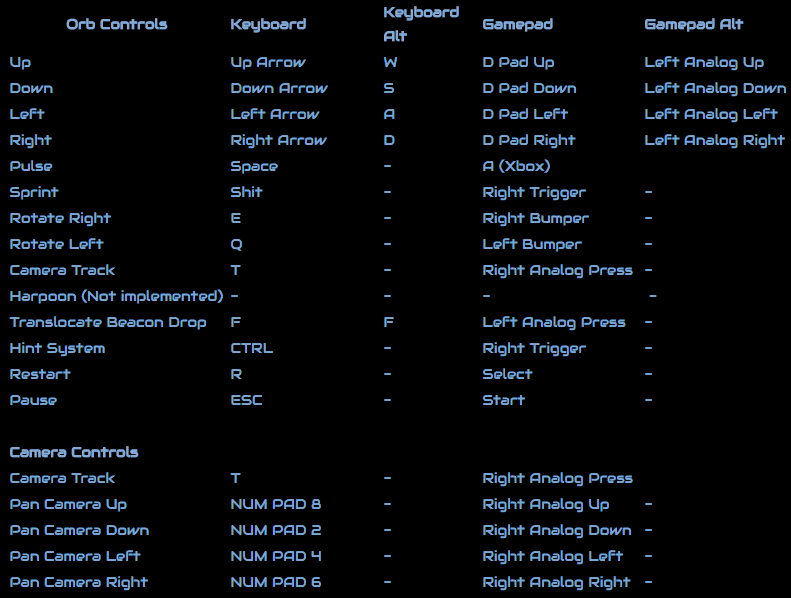 At its heart O-R-B is a push block puzzle game. The game requires you to push different types of blocks around to help you create a path to the goal. Each block in Orb performs a different action when used in conjunction with a "killzone" (water, lava, acid or void). As a rule, Orb may only move one block around at a time - if the block you are pushing stacks up against another block, you will not be able to push them both. Since the mechanic is to push and not pull, I will be providing an "undo" puzzle element (The Harpoon) which will essentially allow you to pull the block away from the offending location. Interested? Read more about this in upcoming puzzle elements.

Simply reaching the goal may not be enough to complete a level. Orb makes use of colour as one of its mechanics: When Orb spawns, Orb will be white - Orb will then be allowed to shoot white pulses (if the pulses ability has been unlocked), use white teleports and enter white jump gates. However there are more colours to Orb - Blue, Green, Yellow, Purple and Red. One of the basic rules is that for you to use a red puzzle element, Orb would also need to be red. If Orb wanted to shoot a green pulse, Orb would need to be green - and if you have not guessed - for Orb to use a yellow jump gate (goal) - Orb has to be yellow.

How do we change the colour of Orb? Simply by picking up the desired coloured orb in the level - if it is available that is. There are also different electric gates in Orb - each will only allow a pulse with the same colour to pass through. For example, a red pulse will travel through a red gate, whereas if you shot a white pulse at the same red gate - it will be blocked.

The third puzzle mechanic that can be found in O-R-B is that of rotation. More specifically: View Rotation, Island Rotation and Block Rotation.

When unlocked, Orb will have the ability to rotate the view at any given time using Q / left bumper to rotate Left, and E / right bumper to rotate right. Rotating the view affects certain puzzle elements - water can change to lava, lava into acid or water, or even no killzone at all - thus allowing Orb safe travels. There are also two other special blocks in Orb which behave completely differently. They are the Iron Block and the Feather Block. The Iron Block will fall to the bottom of the view while the Feather Block will float up toward the view - these two blocks cannot be moved by Orb.

Orb will come across Island Rotators in the game. When in the center of the rotation island, you can use the same keys that you use to rotate the view (Q/E or Left Bumper / Right Bumper) - only this time the island will rotate, and not the entire view.

Orb will also come across Block Rotators on his journey. Unlike the Island Rotator, the Block Rotator only rotates blocks that are on top of it. To use a block rotator, Orb needs to activate it. This can be done by finding the corresponding pressure panel and stepping on it. The block on top of the rotator will rotate 90 degrees then stop. This element is very handy to have around when pulse deflectors are around.

Orb has the ability to view power lines, and can do so in two ways:

Activated: Through Orb's journey, you will pick up "x-ray vision" tokens. These tokens will carry over from level to level, and may be replenished should you happen to come across one.
If Orb has an x-ray vision token available to it, you can activate it using CTRL or Game pad Left Trigger. This will dim out Orb's current vision, and not only will it highlight all puzzle elements, but will also show you the power circuit for each panel or switch.

And finally, for a look inside how I intend on doing the game progression, please read the "Plans in the pipeline for the level manager" section.

O-R-B is still under development and I still have to undergo many more performance optimization rounds. As such the recommended machine spec is slightly high, and I have yet to ascertain the minimum requirements.

3. Missing polish - on pretty much all elements

When reporting issues, please include your machine specs, as well as what you were doing at the time, how long you were playing for etc. The more information I can gather through this process the better.

Zen : No move limit, no time limit. Moves count upward, so does the time.

I do have plans to make this level specific through the game campaign as well - so that the player is made aware of the different game modes.

Given that one of the core game rules in O-R-B is no double pushables (i.e - Orb is not allowed to push more than one block at a time), there will be times when a player accidentally pushes a block against a wall or another block trapping it from further movement. This has the unfortunate consequence of having to restart the puzzle from your last checkpoint. To aid the player, and to ensure for smoother game play, a Harpoon collectable element will be included in a version not too far away from now. Like the X-Ray tokens, Harpoons will be found interspersed throughout each level for Orb to collect. Orb will only be allowed to carry up to a maximum of 4 harpoons, and the harpoons will persist from level to level.

When a harpoon is activated, Orb will shoot out a harpoon pulse which will latch onto the offending pushable element - the player will then have the ability to pull the block away from the wall by stepping in the opposite direction. If the player changes direction, the harpoon will detach and will be removed from the inventory.

Currently the Block Rotator only rotates a deflector in one direction. This will be resolved by including a modified pressure panel that when standing on the panel, and the player issues a rotate left or right command (via Q/E or Game Pad Bumper Left / Right), the block rotator will rotate any block on top of it by 90 degrees - either left or right depending on which button was pressed. The mechanics of this will match that of the Island Rotator, as well as the View Rotator to ensure that there is consistency throughout the rotation mechanic.

The idea of the Coloured Power Block is to have a block divided into 4 quadrants - each quadrant will have a different colour. This block will have a matching panel in the level, but the block may be oriented the wrong way. The player will then have to use the block rotator to rotate the block in such a way that the colour in each quadrant matches that of the target panel.

The Block Spawner will be a powered item in O-R-B, and will require a pressure panel to be activated for it to spawn a block (any block determined by the level designer at the time). To ensure that the block spawner is not abused, the spawner will track the block that it has spawned - should that block be destroyed, only then will the player be allowed to spawn a new one. This mechanic is still under consideration.

Plans in the pipeline for the level manager

Every move in O-R-B is counted (a pulse counts as a move). Each level will have a basis point - i.e. the most efficient and fastest route to the goal. If the player matches this route perfectly - they will achieve the highest possible score for that level (exact scoring mechanism still has to be thought through). For every move over that (plus a leniency margin of some sort I can imagine) a point will be deducted until a baseline progression score is reached. The baseline is important as I want the player to still progress through the game, albeit at a slower rate. As you earn more points, you begin to unlock puzzle elements. 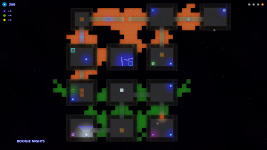 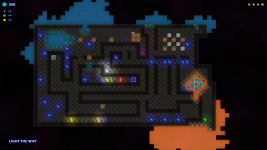 O-R-B has the ability to play co-op, although this feature is far away from completion and is disabled in the demo. You can play on the same machine, using either two gamepads or a gamepad and a keyboard, or you can play on two machines over LAN.
This feature will only be made available once the core mechanics are properly seated, and the game is headed to beta.