In the last couple of weeks GunHero has gotten a bunch of new stuff, and it's time to share them here!

I've been very busy working on the game the last few weeks, and I have some awesome new content to share!

GunHero's jungle environment now has a boss, that is designed after a boss concept implementation I did a while back. The boss holds a deadly blade and two missile launchers. The fight starts with simple escape-the-boss type of gameplay, very similar to the jungle boss, except that this time the running happens horizontally, when the jungle level is much more vertical. After the escape run, the boss starts firing those missile launchers and drops the blade. While the fight isn't anything hardcore, simple mistakes can turn out to be very costly. Here are a few screenshots of the boss. 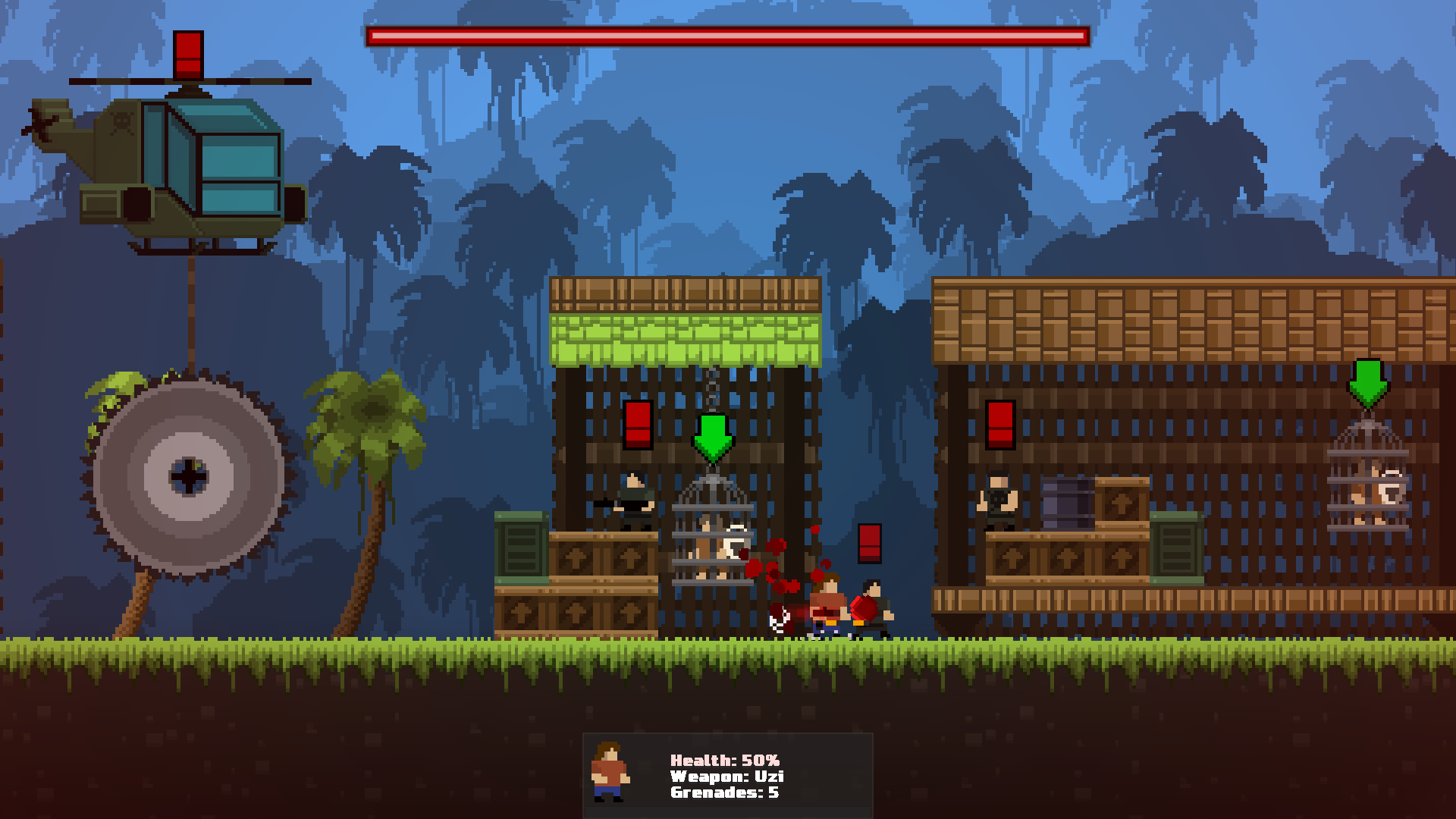 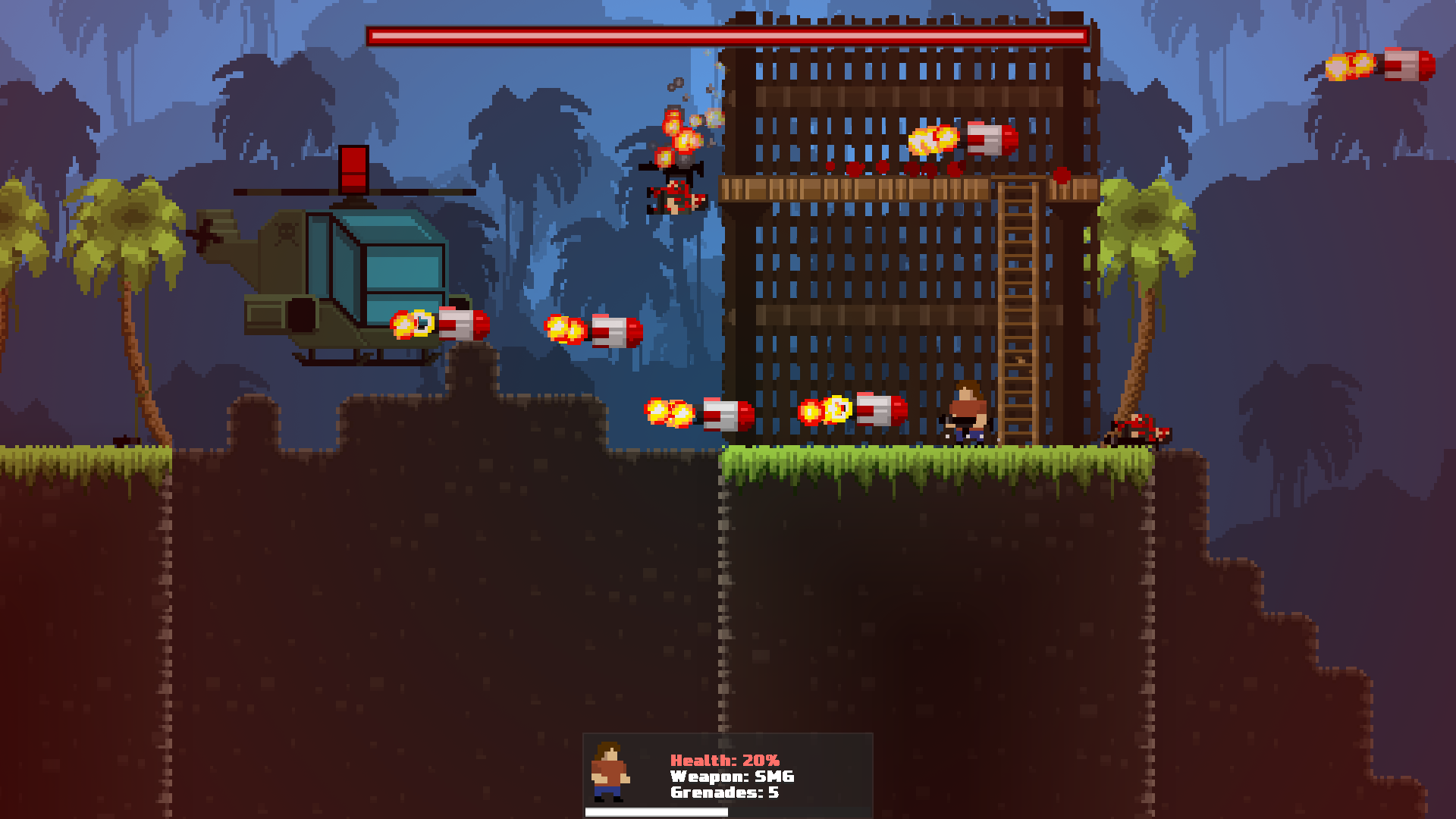 This week, I started with adding cannons to the game. The cannons are built to support various projectiles, however, there currently only is code for burning fireballs. Not perhaps the most realistic choice of initial projectiles, but pretty darn awesome if you ask me.

I also got some nice levels made with these cannons. The projectiles are very deadly, and allow for nice obstacles and timing challenges. I ended up recording a gameplay video of one of the new levels.

Next up on my tasklist were bazooka enemies. The implementation for those was extremely trivial, thanks to my flexible weapon system. All I had to do was to draw the enemy sprite with the hands positioned correctly, and tweak a few values in a data file. I also made a smaller rocket sprite that suits the weapon better than the huge rockets used by the missile traps in the game.

Finally, I started experimenting with applying permanent decals to the game terrain environments. While the look is very much still work-in-progress, the results are quite promising even with a very basic implementation I threw together last night. Currently there are only blood decals, but I want to start adding decals for explosions and bullet hits. I've been fighting with an annoying rendering artifact with the decal map (one pixel errors here and there), but I'm sure it's nothing I can't overcome. The current implementation uses a level sized (my levels are so small that this is doable) render texture. As blood particles hit a solid piece, they are rendered to the render texture and clipped to the solid piece. Very straight forward, but looks pretty nice if you ignore the one-pixel offset here and there. I managed to capture a screenshot where that offset isn't visible, which you can see below. 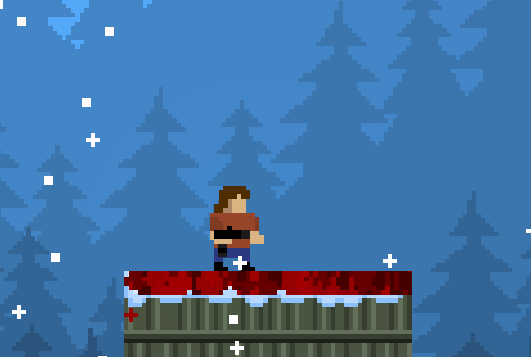 That's it for this update! Oh, and as a friendly remainder: if you haven't already, check GunHero out at Steam Greenlight!

I need this one :D

I'm glad to hear that!

I think you need to tone down the cannon's shoot rate a bit. But regardless, it looks good!

Good idea of that blade chopper, reminds me of The World is not Enough ;)

Thanks a lot! The cannon's shoot rate is tweakable in the level editor, (and the gif is made to loop by cutting a break between shots there) unless you are talking about the shoot rate in the actual gameplay level, in which case I might tone it down a bit, so not a bad idea at all.