I've just finished uploading new beta build 0.977b and demo build 0.977d. The beta includes the new hacking toys and items that can manually switch on/off, and both builds include quite a few fixes and UI tweaks.

Updates Included in Both Beta and Demo

Both the beta and demo include the following fixes:

One of the big changes here is to the UI. The message window no longer flies open when moused over. Instead, clicking inside the window will both open and close it, so it doesn't get in the way while mousing over things. Also, the battle UI now has tool-tips for the combatants' previous move icons.

Another big change is the removal of auto-turn-advance, which kicked in when the player was unconscious in battle for 3 or more turns in a row. I'm not certain that this caused the "endless turns" bug, but it's possible. And since AI now tends to loot the player or quickly finish them, this feature seems redundant for the risk.

The encumbrance changes should be a welcome sight to those who choose the "feeble" trait frequently, and being able to access items while in cover should be important to "ranged" fighters.

Updates to the Beta Only

In addition to the above changes, the beta has the following updates: 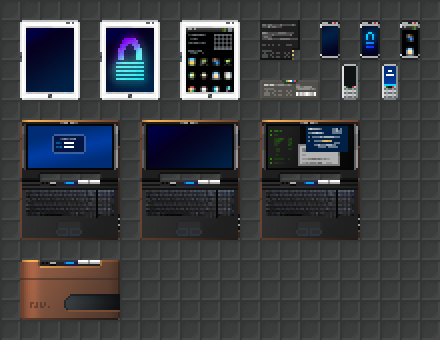 Beta players can now find various hardware items in the game, which have random data inside. Most of the time, however, that data is locked away. Hackers, using appropriate software with their laptop, can crack these devices to get at this data. And the data can include a bit of history, humor, and in rare cases, information worth money at the junk store.

Some of these devices can also be used as tools in the field, such as lamps and GPS software on smartphones and iSlabs. In all cases, though, these devices will need appropriate batteries and charges to operate. To access special features of these new items, right-click the item and choose the desired operation.

With these new changes, flashlights and goggles have also been updated to take advantage of the right-click menu. Now, they can be switched on and off manually, instead of automatically when equipped.There were also quite a few major bugs fixed in this version, especially having to do with loading of save games.

Overall, both builds should represent a more stable experience, with improved usability. And hopefully, the new toys in the beta were worth waiting for!

As usual, let me know on the forums if there are any issues using the new builds.

This looks like awesome stuff. I'm psyched to fire it up again and check it out!