Updates Included in Both the Beta and Demo

Both the beta and demo include the following changes: 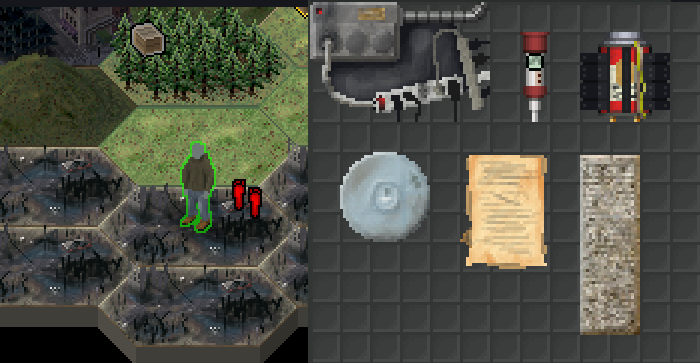 The Great Black Swamp, and some of the new items in this build.

The biggest change here is The Great Black Swamp, an area along the south of the map that presents an impassable barrier to ground traffic. New hex art, encounter art, toxic water, water tester, headlines, and data files are all added to the game as part of the swamp's impact on the area.

Cannibalism has also been addressed, making it less desirable to subsist on human flesh, and for beta players, less lucrative at the market.

The quick recipe system had a few improvements made, which should hopefully reduce the number of accidental ingredient uses (like burning a rifle to make a campfire). It also now supports grouping, so there should be fewer redundant recipes listed. The game will try alternate, similar recipes behind the scenes if the primary one doesn't work.

The loot frequency has been tweaked a bit, so major piles of stuff should be smaller than before. Finding stuff tends to be pretty easy in 0.979, so this should temper that a bit.

Plus, there is a new creature out there, and it's not a pleasant one. Beware where you sleep :)

Updates Only in the Beta

In addition to the above, the beta has the following updates:

The big news here is new encounter content. I won't spoil what it is, but there are two more major encounters, a medium one, plus a few mini encounters and tweaks to existing ones. And one of the new encounters has a major secret revealed in it. (If you can find it!)

Electricity should now be easier to come by, between Bob's "Hot Brick" and the tent city power grid. Let me know if you think the new tent city power supply is a good way to handle forest and water resources!

Overall, this build should provide a few new tricks and things to unwrap, plus several fixes and tweaks to make things smoother. Let me know what you think!