Today, Natural Selection 2 went up on the Steam Store for pre-order.

Today, Natural Selection 2 went up on the Steam Store for pre-order. This day is one we have looked forward to for many years, and marks a major milestone in the development of this game. We are also happy to announce a release month: October. As we clear some final hurdles over the next few weeks, we will nail that down to a specific day. 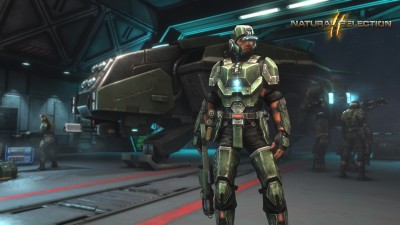 From now until release day in October, Deluxe Edition will be the only version available on Steam, and will be discounted to $24.99. There is also a 4-pack available for $74.97.

Now for the really cool part: We have some presents for everyone who pre-ordered the game before today's Steam release (anyone who has played in the NS2 beta). You all receive:

This means that today, we are giving away 45,000 copies of the NS2 Standard Edition for free. If you own the NS2 Special Edition (Black Armor) we will be adding an option to allow you to switch between Deluxe and Special Edition armor.

wow you guys are awesome, thanks for the free copy and keep up the great work!

Congratulations on all your hard work Unknown Worlds. I have been tracking for years since before it came onto the new engine and have been amazed at your work and am glad to have contributed towards it. :)

Why did I not pick this up when it was bundled with Overgrowth. Pity the fool.

I shall be advising everyone I know to buy this.

Had this since December 2010, so I get an upgrade to Deluxe & a free copy for a friend?

Good to spread the word.

And I'm glad to see you took in the suggestion on the price; I'm sure it was not me specifically or anything, but I often argued in all news posts to lower it to 24.99$.

As for the extra copy, when do we get that? Have a friend I want to play it...I didn't get an email.

Within the week (valve time) you should see a gift appear in your steam gift manager.

I was under the impression NS2 would have a SP element. Am I wrong on this?

Correct, there is no single player. Need a lot more money for SP.
Maybe one day we can make one.

As i know, this was always MP only game.

Anyway if I buy now i wont have beta access? Also i have core2duo @ 1.80, 2gb ram and HD 6670 and XP. This is quite old configuration but is it good enough to run game?

is there still no offline bots?

one way to get people to buy it give a tf2 item to people taht pre order. don't think that's a good idea though.

Clearly i still have access to the beta so i am assuming the NS2 will appear in my game list at some point (just missing the "beta" line) and also that the free copy of NS2 will go to my inventory is this correct?

nevermind a steam restart seems to have fixed me not being able to find it! congrats again

So you found your free copy?

Im just wondering
I missed out on the black Armour preorder and was wondering if there is ANY other way to get it.
It looks beautiful :_________:

nope, for alpha people only.

UWE twitter states that the free copies are in the pipeline and have not been released yet. It will be through steam gift system.