So, after another month of work I'm proud to present new and improved Military Force version 0.21.

That one is the most important. The first 0.18 demo contained only one level - that definitely wasn't enough to get a taste of the game.
Another downside of the demo having only one level was that there weren't enough enemies and weapons for player to check out.

Hope this update will fix the situation, you'll get to try more weapons, such as the rocket launcher and proximity mines, face deadly enemies and more :)

The second most important update is the UI. The old UI was sort of a stub, with this update UI now matches the style of the game:

The UI is designed with html/css, it's powered by awesome UI library - libRocket (Librocket.com)

Those are also very important, you can now change your video/audio settings. 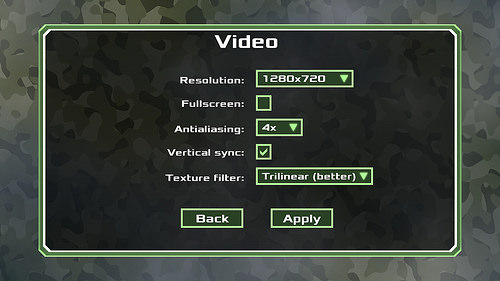 The video settings include 2 particularly important options: fullscreen mode and vertical sync. So you can now
play the game fullscreen if you like. And you can check/uncheck vertical sync if you have stuttering problems on your system (e.g. that can be the case if you're running system with multiple GPUs). 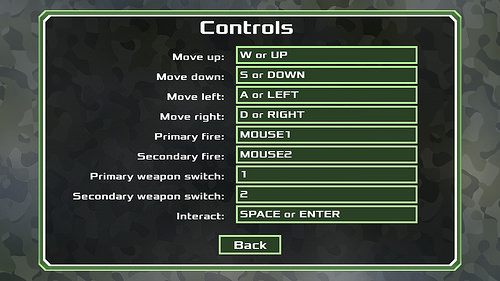 And, well, you can customize the controls.

Another thing that was a bit confusing in the previous demo is the gems that you collect during the game: 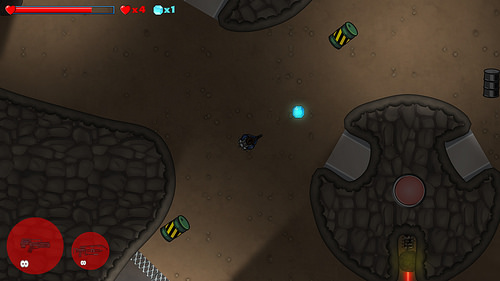 Now they'll make sense, because you can now buy stuff in exchange for these gems right before the mission starts: 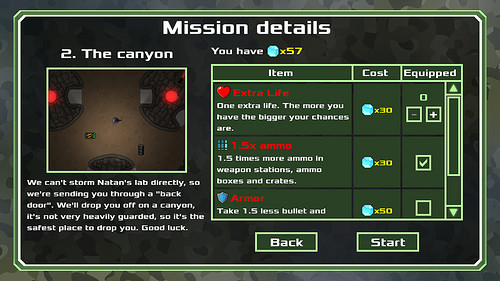 There're currently 4 items/boosters to choose from, but there will be more

There're also other small improvements that were made. The end of mission statistics stub was removed and it now counts correctly: 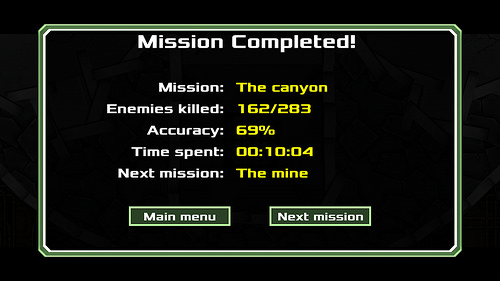 The debug console was removed (it now logs to a file) and stuff like logo screen and credits were added, that makes the game feel more like an actual game.

There were also many other small internal fixes as well as improvements, but those mostly go to further game levels.