Is the most important thing in a turn based strategy games the starting position?

Posted by masteroftactics on Oct 7th, 2013

Have you ever thought strategy games have become a little too predictable? The player with the most always wins! Contrast this to military history where inferior armies have often been victorious. How could we build a game with more depth and less predictability?

My attempt in Master of Tactics used a duel approach:

1. Create a complex damage system with a large quantity of attack types.
2. Make movement and strategy on the battlefield important.

Flanking has always been a significant battlefield maneuver, how can we simulate the importance of flanking in a 4X turn based strategy game?

The default engagement in a computer 4X battlefield is head to head. Traditionally tactics have involved gang up and isolate, attacked from range etc. These strategies are good and should remain useful – but by themselves are limiting.

In real life, tanks are designed with better defenses at the front making an attack from behind more dangerous. In Master of Tactics, a hit from behind receives a 100% bonus on all damage that penetrates the shields (hit on the side is 50%).

If a craft does not have enough movement to move over another craft, turn and attack in one turn then all players must think about position on the battlefield. There will be a natural tendency to start thinking about holding a front line and flanking becomes a killer tactic!

An easy way to out flank your enemy is to have more craft. While some of your craft engage the enemy head on the others can move around the rear and attack from behind.

Using smaller craft can provide a numerical advantage allowing some craft to engage the enemy while others outflank and attack from behind. However, small craft are easier to destroy. We found this strategy risky.

Outflanking on the Battlefield 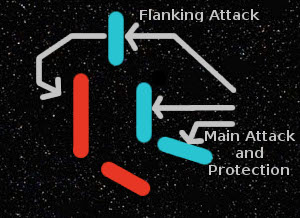 When flanking is introduced into a battle system, players must plan their movement. We found that flanking was not easy to achieve. Moving craft out to the side of a battle attempting to move around and attack from the rear was not sufficient – because you would get attacked from behind in the process.

It is necessary to use the majority of your fleet to engage the enemy head on, protecting the fastest craft that are attempting the flanking maneuver. This was often quite effective! 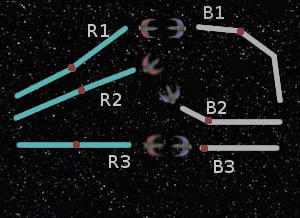 We found that during a normal battle flanking maneuvers occured naturally when a craft in the center of the battlefield was destroyed. However, craft moving into the gap needed cover to protect their flank too!


Here is an example. Craft B1 has attempted to outflank the enemy who has blocked using craft R1 and R2. However, red player has not protected the flank of craft R2 which is now vulnerable. Craft B2 is exploiting the hold in the battlefield to attack R2. This has made B2 vulnerable! Next craft to move is B3 which must now protect the flank of B2 by moving between B2 and R3 facing R3. Failure to think or plan your movements does have a significant effect!

On the surface Master of Tactis is another 4X turn based strategy game in which you can blast your enemy to oblivion by building a bigger better fleet. However, we have found that a tactical battle system with flanking has a significant effect on battlefield tactics. We have found that poor strategy does effects the outcome of the average battle. What you do matters!

Of course, these simple game elements do not really produce the unpredictability and tactical depth of real life, but it is a step forward. Rome was not built in a day right? The question I now put out there is - How do we make it better?

Have an idea? Share it in the forum Master of Tactics Forum

Master of Tactics Turn Based Strategy