We were heavily inspired by a good number of sources when we began to conceptualize Super Hematoma. We loved the beat-em up style of gameplay from the NES era of games, the graphics of the Neo Geo, the competitive style of pc games, and the timbre of both the NES and Game Boy soundchips.

We were heavily inspired by a good number of sources when we began to conceptualize Super Hematoma. We loved the beat-em up style of gameplay from the NES era of games, the graphics of the Neo Geo, the competitive style of pc games, and the timbre of both the NES and Game Boy soundchips. 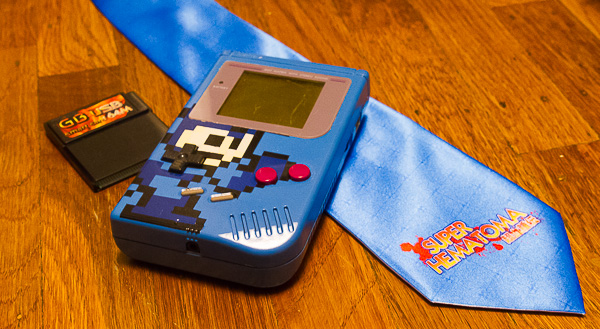 In fact, when Matt first proposed the idea of me making music for a game, the first thing I did was start looking into the chiptune scene. At that point I wasn’t overly familiar with what was going on in that world. I remember running a simulation at work, and looking up chiptunes while I waited. “Holy crap!” I exclaimed to the guy sitting across from me, “Did you know that Game Boy is a music genre?“. It was an absolute delight to discover LSDJ.

Herbert Weixelbaum has a great series of comparisons of the sound created from the various Game Boys over the years. And after listening to these, I decided that I wasn’t completely happy with how LSDJ sounds from a DS Lite (the only model of ”Game Boy” that I had in my possession). The only solution, was to seek out an original model in order to make the highest fidelity low fidelity music available. I don’t remember specifically why right now, but for some reason nor another, this got put off of my priority list and while I would keep dreaming of picking one up now and then, it just didn’t happen. 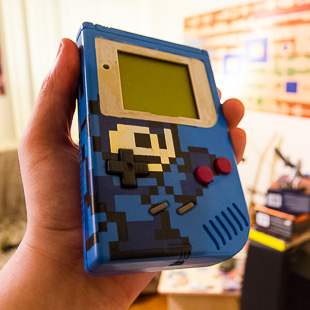 It didn’t happen until my birthday at least! My obsessiveness makes it tricky to get gifts for me sometimes. When I see something that I want, generally I’ll fixate on it for a few days, and then just break down and buy it. But that year, things worked out smashingly! My wife managed to score an original model Game Boy from Ebay, and while I was busy cranking out the overtime at work, she was busy customizing it with a totally rad Mega Man paint job.

Unfortunately, I didn’t feel that Super Hematoma would work with the particular sounds that the Game Boy creates. As we’re imagining a game where people are likely going to be talking, whether it be in the same room to each other, or online via a microphone and headphones… I felt that the Game Boy has a harshness to it that commands attention and is tough to compete with. Maybe it’s because I’ve always played with headphones on, whereas I often would have people over and we’d be talking while playing the NES… but I felt that for this game, maybe the sounds of the NES would work better for the music. I was a little heartbroken at the idea of not including Game Boy sounds into the game.

“But wait!” I thought. We obviously need Sound Effects! Now… yes, it’s true that the NES had great sound effects. Mega Man in particular sounded great when he jumped or shot his gun arm. The Mario sounds are pretty iconic, right? But I still love the Game Boy. I decided I’d worry about making the music with Famitracker, but sound effects were going to be created with Little Sound DJ.

Matt’s been using XAudio2 to get the sound going. It’s easy for a user to just take for granted that stuff works, but it’s interesting as a developer to have to make stuff work, and to realize that formats and such make a difference. The first time I provided .wav files to Matt; it just didn’t work. I ended up having to open up one of the example wavs that come with XAudio2 and compare the metadata to figure out why ours wasn’t working. Turns out there were some differences, and that if I want my sound effects to work in the game, I have to make them conform to this set of standards:

This format seems to be unrecognizable by Google Chrome… so when keeping track of everything in our wiki, I end up having two versions of each file. One that we can listen to from the wiki, and one which can be downloaded and added into the build. I also make sure to record the settings from LSDJ, just in case we want to modify, or re-record in the future and something happens to the LSDJ file.

At any rate, the process thus far has been to create the sounds in LSDJ, record them, trim the sound effect using Adobe Audition, and then to save in the above described format. Here’s a review of some of the earliest sound effects we’ve used in the game:

A 32-bit engine limited to a 16-bit colour template playing 8-bit sound effects? Seems a little...off.
The characters and the backgrounds don't seem to blend very well either.

That said, the background looks good.

The characters have actually been revised a bit, but because we've increased the complexity in how the game needs to load them, we haven't yet got them demonstrable in-game.

That said, it's not a drastic rehaul, so maybe you'll still feel conflicted about them down the road.