In the last days we have been getting a lot of questions from you, our backers, and some media representatives about the stretch goals. We decided to release them as soon as we reached the 25% funding mark. A small spike of backers is now bringing us close to the 30% of the initial goal! Our heartfelt thanks for the new backers and those who decided to upgrade their pledges. The time has come and here are our Stretch Goals for Exoplanet: First Contact Kickstarter campaign!

When you start a new game, you will be able to select several background options for Jack Sharp. These options will give him bonuses for certain skills and sometimes unique perks, affecting the gameplay in many ways. Origins will also have visible impact on Jack’s appearance. The most important part is that different social groups on K’Tharsis will recognize the origin you have chosen and react accordingly.

Mister Sharp can be:

Let’s say you choose Infamous pirate option (my first origin of choice, to be honest). Infamous pirate Jack Sharp gets +1 rank to Tactical Scanner and Intimidation perks, because he really looks dangerous with his cybernetic eye patch and all these battle-earned burns, scars and sick pirate tattoos.

The most important part is that he gets a unique perk Hull Breaching Expert that allows him to use explosives to open locked doors and containers (with certain limitations of course).

An Infamous Pirate also gets a unique trait — Black Market Access. A character with this trait will find merchants more willing to cooperate, even in the outlaws’ camps. Black Market Access unlocks additional items for trade in merchant's stock. Usually these are powerful, banned weapons or drugs and other illegal stuff that are hard to get your hands on. When the Infamous pirate meets other people, the outlaws and other pirates will recognize their kin and show some respect for Jack. The law abiding citizens will despise and fear him, sometimes making it harder to communicate with them peacefully. Playing as a pirate rest assured that the local sheriff will always have his eye on you, waiting for even the smallest mistake and in turn tie a slipknot around your dirty infamous neck. 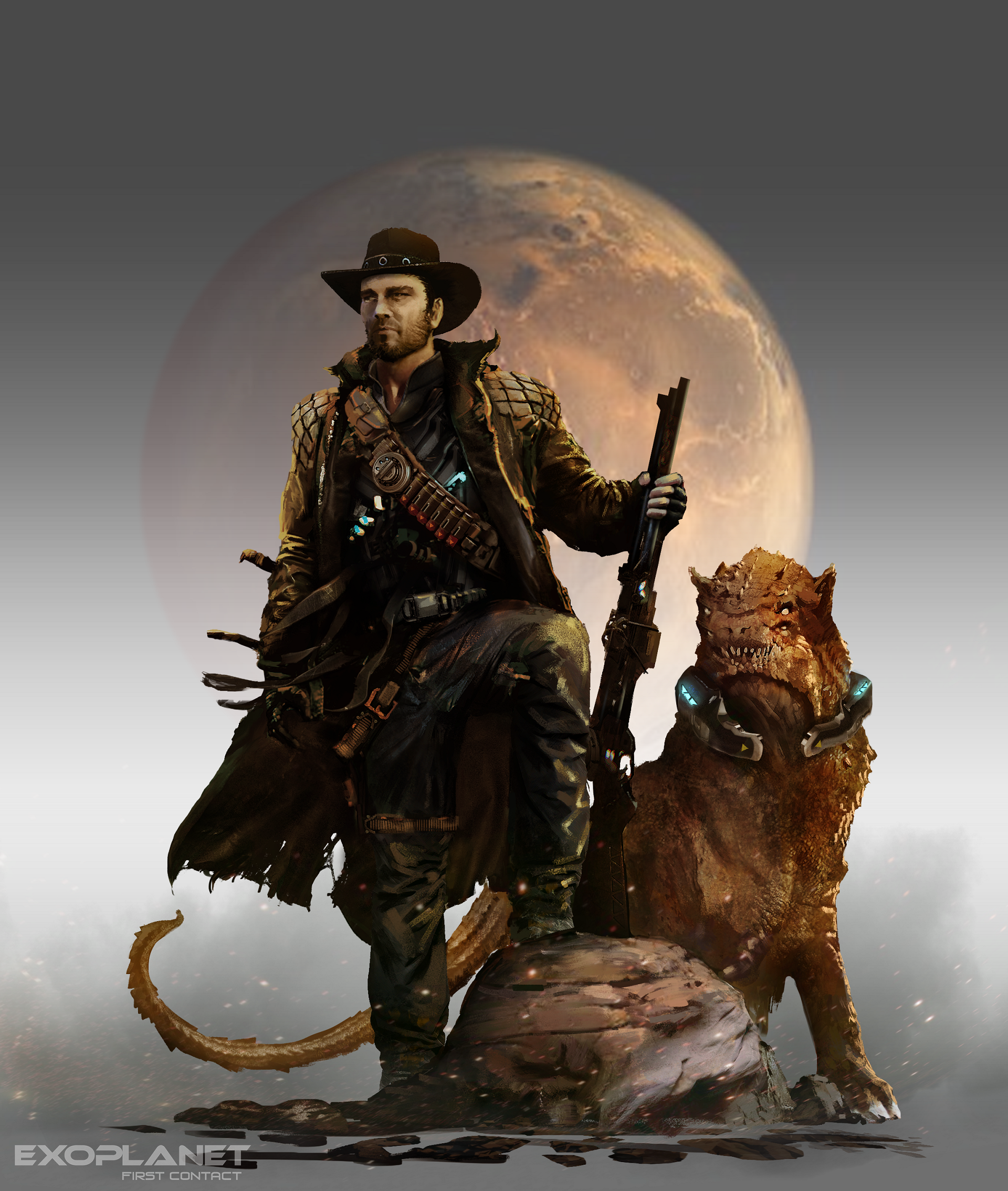 Frontier colonist is a big lad, healthy, strong and tough as nails. While being deadly in melee and fighting unarmed, the Colonist also knows how to handle a hunting rifle. Using his unique Duct Tape Repairs perk and swear words he can fix almost any piece of equipment and will be quickly accepted among the plain folk like farmers and prospectors. He is not afraid of hard work and will make a perfect antigravium miner or craftsman, getting bonuses to his share of crystals from every node with his +1 rank bonus to the Mining and Field Mechanic perks. His favorite trick is a special melee attack performed with a huge antigravium mallet, granted to him by Working Class Power trait.

The "space Mowgli” raised by primitive alien race on a jungle planet has a huge +2 bonus to the perk Beast Tamer and can handle even the most fierce animals of K’Tharsis with ease, stalking, killing or taming them without any special gadgets. His childhood made him resistant to poisons and diseases thanks to his unique Mutant Metabolism perk. He can even get himself a permanent alien creature pet with his We Be Of One Blood trait. The downside is that he has trouble other humans to do what he wants (-1 rank penalty to Silver Tongue perk). The aborigines and wild animals will be his best friends on K’Tharsis.

Corporative operative is an expert in hacking, social engineering and stealth infiltration. He can hack the computers you otherwise were not able to as well as manipulate human minds and motives. He has access to the advanced Chameleon Skin and exclusive Remote Hacking trait, which allows him to hack devices from a short distance, even staying undercover. The Terraform corporation will welcome an agent with this set pf skills in their ranks but the professional spy will have a difficult time gaining the trust of other factions.

Free spacer values his freedom and profit above anything else. Being a product of the semi-anarchic multiracial civilization of the Rogue Worlds, he knows how to Barter better than anyone else. The aliens will be fascinated with his Alien Tradition Knowledge trait but the local humans will be suspicious of a man who speaks too many alien languages and dislikes their local booze.

A man from nowhere is a legendary gunslinger, who leaves a trail of challengers’ corpses behind. Inspired by Clint Eastwood’s early roles, he comes to the town to set his own rules. No man or alien is faster and deadlier when it comes to shooting first. This guy’s first shot after the executing Quick Draw is a guaranteed crit, a possible one-hit kill that opens lots of tactical options for him. The local authorities are not fond of such visitors, though the small folk sometimes think of him as the only real protector they can find on their cruel Frontier planet.

These are our current plans for developing the Origins System to add more reactivity to the Exoplanet’s world. Origins give the players additional means for customizing the main characters without taking away his personality and key factors of his career that made him who he is at the beginning of the game. Initially, we decided to restrict our origins to 6 different presets, but this will change if we get more funding on Kickstarter and in beta development phase. Given we get enough funds for developing new content (e.g. additional dialogue lines and scripts for alternative quest solving) we can increase the influence that the Origins will have to all aspects of the game. 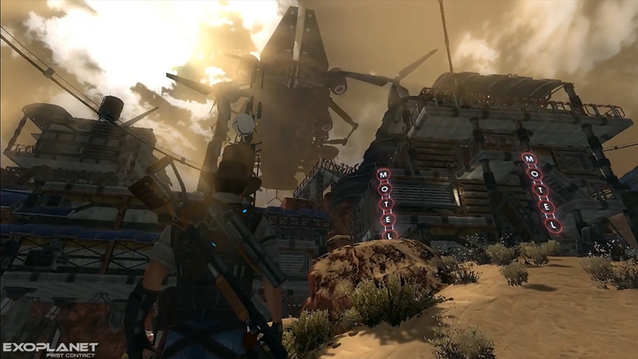 This stretch goal is heavily inspired by one of the most important Firefly TV-series concepts as well by the one of the most popular mod categories for open world RPG’s - the building of a home or a mobile base for the player. In our vision, the personal spaceship is a very important part of Jack Sharp’s life and one of the key aspects of the story in Exoplanet.

After achieving this goal we will include a long, nonlinear quest line that will guide you to Jack’s old ship. Fixing it as well as optional gathering of the crewmates will be a measurement of the player's progress through the story of the Chapter. Gradually the ship will become a fully functional mobile base allowing for faster travel on a global map and will be a visible representation of the choices you have made. Its interior, crew and useful functions will depend on the paths you have taken on your adventures.

A similar concept can be seen in KOTOR1-2 and Masse Effects, but we really want to give it our unique touch. A cruel, selfish Jack will turn his ship into a weathered, terrifying pirate and slayer vessel, decorated with heads of his enemies and filled with a crew of crooks and treacherous outlaws. A paragon of virtue will have a shiny, state-of-the-art prototype with a loyal crew and a reputation that will be welcomed in every legal spaceport.

In our vision of the Exoplanet’s complete state we see a global map as a convenient mode for travelling between locations and finding new ones. Global map will become a new level of exploration of the game’s world, similar to Fallout 1-2 or Wasteland 2, if you want a contemporary example. The player will be able to travel between towns, settlements, oases and other points of interest, managing his resources (provision, water, fuel, medicines) to survive in the unforgiving desert of K’Tharsis. He must choose and improve his gear, modify his hoverbike or arphant equipment, buy new maps of oases and save shelters in certain regions, and carefully prepare for the first journey into the unknown and uncharted areas of the desert.

Global map travelling mode is one of the features we will include in the first Chapter of Exoplanet in any case, its basic implementation does not rely on meeting certain Kickstarter goals. But there is one big addition to these mechanics that we really want to include in the first Сhapter of the game to increase the length of walktrough and make each player's experience with the global map mode unique and thrilling. This addition is called Random Encounters and it is set as our next big stretch goal. 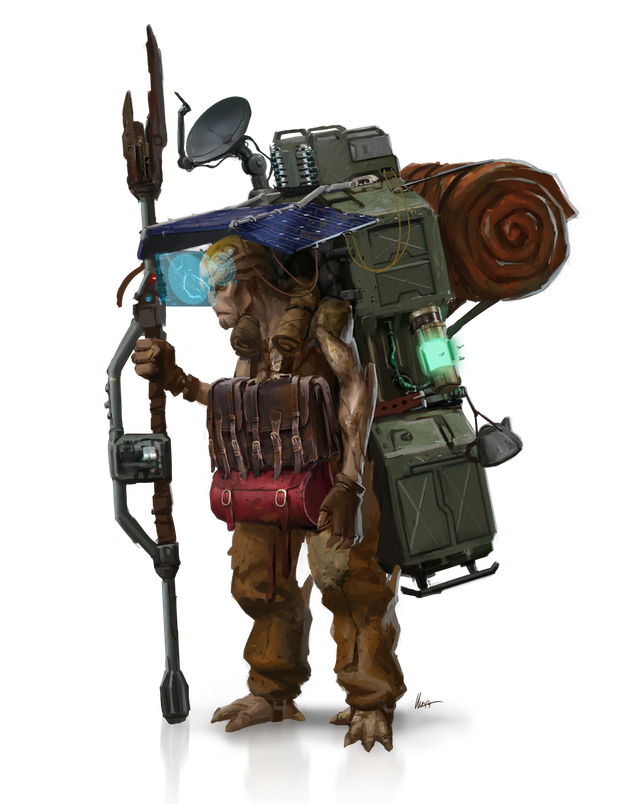 Random Encounters mean that while roaming the desert planet K’Tharsis in global map mode, the player will encounter lots of different dangerous and potentially profitable scenarios, mostly generated randomly, but according to a set of logically correct rules.

On the trade routes raiders will attack the caravans and you must decide whom to help in this bloody conflict situation. You will meet runaway slaves and those who chase them, arms dealers, bounty hunters and their targets, and mysterious strangers who need your help... or who want your head on a stick. Many environmental dangers wait for the lone wanderer in the desert: sand and ion storms, anti-gravity anomalies and extreme heat waves, as well as, meteorite bombardments or catastrophic migrations of poisonous locusts swarms.

Random Encounters in Exoplanet will react to the player’s choices. If you started a war between two factions, be prepared to get caught on a battlefield between the two sides. If you accidentally wake up an ancient AI-controlled military factory, the killer robots will plague its surroundings. If you help save an aborigine tribe from an epidemic, you will meet their scouts who will provide you faster, safer passage through their territory.

There will be unique scripted events as well, each offering a small adventure to remember. For instance, you can find a variety of things like the ruins of an ancient aborigine temple, a strange alien spaceship crash-landed in the desert, a sacred oasis with unique healing powers, or a legendary giant sand shark. And this is just a fraction of what we have prepared for the random encounters system in Exoplanet! We hope to reach this big and important Stretch Goal with your help!

Remember to always include the link to the kickstarter!
Kickstarter.com

Oh yeah I forgot do it, thank you!

Holy Crap i'm dying if i dont get a beta, this is the most impressive game ive seen in a long time.