An update from your friendly neighborhood Owlchemy Labs. We’ve been really delighted with the response to our new bonus scenario “Indie Plane Crash”. Fans, players, and press are elated with the inclusion of this new story, as are we!

You may have wondered how we arrived at this idea. When we decided to create a Kickstarter video that was ‘different’ from all the rest by building it all in the game engine, we ended up needing to create avatars for ourselves within the world. Once we had put ourselves into the game, we realized how awesome it was to see our virtual selves and the idea sprang up from there:

“How would a group of indie developers react to being stranded on an island?”
The jokes started flying, the idea of Alexander Bruce attacking a boar with his bare hands was brought up, and we knew we had to build this.

We shot a quick email over to Ichiro, Rami, and Phil, asking if they would be interested in a silly situation where they were stuck on an island in Dyscourse. They were mega-excited and the idea ballooned way beyond our wildest expectations when we ultimately decided to say,

“F-it, lets just message Tim Schafer and see what he says, having never met him for more than a minute at a game developer conference.”

He not only said yes, but offered that he would love to be on the island, and although he had boy scout training, he would likely be the first one to gnaw on his own leg in a survival situation. Our artist cranked out the caricatures of three of the devs in record time and we ran with it. And now here we are!

We’ll be building an awesome fan-story for you guys and we think you’ll all really enjoy it. Our goal is to be completely irreverent with the writing, injecting humor into each character in a “true to life” but over the top Owlchemy way. For example, we know many of these devs personally and their skills / quirks / mannerisms will be reflected in game.There’s the obvious inclusion of jokes about the games they’ve made (if Rami doesn’t end up fishing then we’ve done a disservice to the entire game industry), but we want to have players feel a bit of the behind-the-scenes vibe of hanging out with indie developers. We luckily get to experience that once a year at GDC and are hoping to recreate the thrill of having a bunch of like-minded developers in one spot. This time with a bunch of deadly snakes.

With that, here’s a few fun quotes and links regarding the new shiny stuff:

Danny Cowan of Joystiq writes: “Odds are good that some of these indies won't survive long enough to be rescued.” -- Wow, Danny! I’m sure Ichiro would get in a fist fight with you over that postulation. We’ve got certified boy scouts here!

John Walker of RPS writes: “$10,000 buys you the right to fly yourself to Boston and buy the team their dinner, and excludes a copy of the game. I wish I had a spare $10k to reward them for that.” -- John, if you put your mind to it and rob a few banks, anything is attainable.

waaaaaaaals of RPS comments says: “I have a feeling that the Ichiro Lambe character is going to be an incredibly silly character. This is a good thing.” -- We’ll be sure to have Ichiro as the ultimate stoic, dry character. Just because you told us not to! Ha!

Joe Jasko of GameZebo says: “... even Phil Tibitoski of the lovingly weird Octodad” -- I have to say that Phil is lovingly weird, with or without a rubber octopus suit!

The fine folks at Asthree Works are creating an insanely cool game that you definitely need to check out. It’s called Paradise Lost: First Contact. They’ve recently reached their funding goal and are on their way to their first Stretch Goal!We’ve reached out to them and they’ve reached out to us (yes, a true love story here) and we’ve made each other some brilliant cross-over art. Check em out! It’s Rita in super-cool pixel art!! 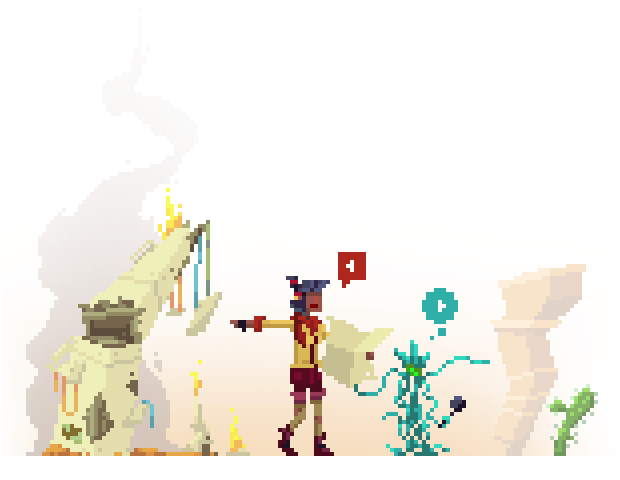