Hello everyone! We are pleased to announce that Handsome Mr. Frog, our new-school arcade classic game that was released on itch.io a couple of weeks ago has begun its Greenlight campaign! 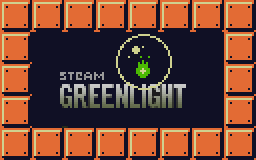 "But wait, Cullen, what is this frog game?"

That's Handsome Mr. Cullen to you, friend. Handsome Mr. Frog is a game that Britt and I had been working on in total and unrelenting secrecy. It is our take on how a classic arcade game in the vein of Taito classics and the original Mario Bros would look if it was designed in a modern environment. It is the first in a series of arcade games that we will be releasing over the rest of this year.

In Handsome Mr. Frog, you place as the nominal Handsome Mr. Frog, a handsome guy whose hats were stolen by a bunch of no good, less attractive normies. You traverse through 4 worlds, each made up of three levels (selected out of a deck of many), swallowing enemies and spitting them at other enemies.

The levels continue on infinitely, but if you manage to clear all 4 worlds, the difficulty ramps up immensely. As an arcade game, the primary goal is SCORE and the ethereal sensation of being able to type your initials into the high score board. "A...S...S." This word is here, at the downtown arcade, until somebody can best me in raw, unbridled talent. Although the itch.io version only supports a local leaderboard, in the Steam version we will implement online leaderboards so you can spell nasty things to the whole entire world.

Along your adventure, you will also find a multitude of outfits which will then become available for selection before a new game. As of now, there are a total of 64 outfits, which we plan to constantly expand because frogs with mullets are *VERY HANDSOME*

As of now we are 50% to the top 100 on Greenlight. If you would like to see this game on Steam, take a couple of seconds to go and vote, share, and comment on the Greenlight page. Let us know what features you'd like to see included!