Word power! Tactical RPG Wizards of Unica will be enriched with deep dialogues, between comedy and drama. But before the content, we had to figure out how to show its aesthetic: final fantasy iconic blue box or minimal black and white? Check it out!

Some time ago I introduced the GUI interface, later enriched with icons for powers, combo, status and items. The character’s portrait shows his health in the left column, together with the dominated Spirits and their cooldown while on the opposite side the enemies portraits depict their remaining health and status.

But Wizards of Unica will be more than just numbers, icons and spells: Exekiel the Repentant Sage and Rake the Rash Rebel will have their own different perspective on the story and they will talk about it, sharing thought and words with friends and enemies, giving shape to the Gathered Empire of Unica.

As a fan of old school RPGs, I was concerned by GUI and dialogues since our first brainstorm, not just about their content, but about their look. In my gaming past I saw dozen of different solutions, from the bothering noisy dialog boxes in Mission Impossible (NES) to the minimal black n white of coin op Kadash and the iconic blu window in Final Fantasy. 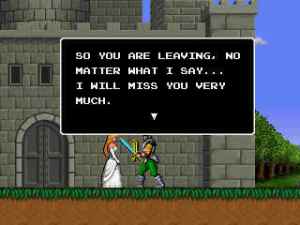 First goal while designing a GUI for dialog is to make things as clear as possible. As a newbie in the early ’90 I was often confused by who were talking; sometimes just a name on the top isn’t enough. I used two simple tricks to involve the gamer into the dialogues:

Another issue I had to solve was to find out how to animate the dialog windows. The solution I used is the simplest one: the window appear as empty for 0,1 sec, than the text appear (we will see if any letter-by-letter transition will be used). Emptying the window helps in giving a visual rhythm to the dialog.

Now that the graphic interface is almost fixed, I will start to write dialogues, and that’s always an hard task, if you want to give depth to characters and expand world consistency. And that’s not only about to chose the proper style, or play a quality drama or put the right jokes: in videogame every word has to be even more functional than in other media. They provide effective instructions as well as narrative information, so simplicity and effectiveness must be the main goal to reach. With the right dialogues you can avoid action-breaking tutorial, and just let the player live into the game without any meta-game interruption.

For sure there are a lot of other things to develop, before going into writings, but I just wanted to show you all the backstage working about this intriguing aspect of the game.

Holidays are coming and an alpha update will come along! So stay tuned, download the present version if you didn’t yet, and share your ideas and comments with us, those are always very helpful!

Thanks for your support