A first look at the new game mode in Empyrean Frontier.

It's been a while since I've posted something new, but in this update I'm introducing a new game mode to Empyrean Frontier in addition to the single map skirmishes already in the game. Essentially, the idea of this game mode is to be somewhere between a normal skirmish and a full story campaign. The focus of the game at the solar system level is on taking and holding territories. You focus on the grand strategy in the solar system view, and play out the battles as skirmishes in order to settle the result. The idea of this game mode is similar to the galactic conquest mode in Star Wars Empire at War, or the strategic mode in the Total War series, but with some big differences. Empyrean Frontier's solar system view is a more purely strategy focused game mode than the standard skirmishes, but still uses the same basic mechanics of real time strategy and a standard map.

Instead of being divided up into a small number of distinct nodes, the solar system is represented by a continuous 2D grid, where multiple fleets (transport groups containing regular units) can move around in real time. Fleets may attack enemy owned planets or fleets themselves, creating mini-skirmishes between the contained ships. Each of the planets or other named entities in the solar system represents a subsystem that is similar in size and style to a standard skirmish map, complete with moons and asteroids for mining. When a battle is joined entirely between fleets, the subsystem that is created is much smaller and is meant to be resolved in a single tactical battle.

I've spent most of my time recently just working on game design and making sure that this new game mode makes sense in the context of the rest of the game, and most importantly that it's fun.

The main idea is something that I've actually planned on and had some framework for since the beginning of development. The reason for this game mode is that I wanted to give the player the feeling of building up an empire and conquering multiple planetary systems kind of like a 4X game, but still primarily using traditional RTS game mechanics.

The two main concepts in this game mode are territory and battles. In a lot of scifi (Star Trek especially) there is often a discussion of territorial wars between different factions, where each side fights to control specific territory, for the trade routes and resources within those sectors or quadrants. This game mode is my attempt to simulate that kind of prolonged conflict between two or more space empires. The solar system is split up into a grid of sectors (currently a grid of 64x64) each of which, when controlled by a nearby planet or battle event, will give that player a small amount of income. Each battle event pauses the main system and takes place as a tactical RTS skirmish, granting the winner control of new territory back in the solar system view. 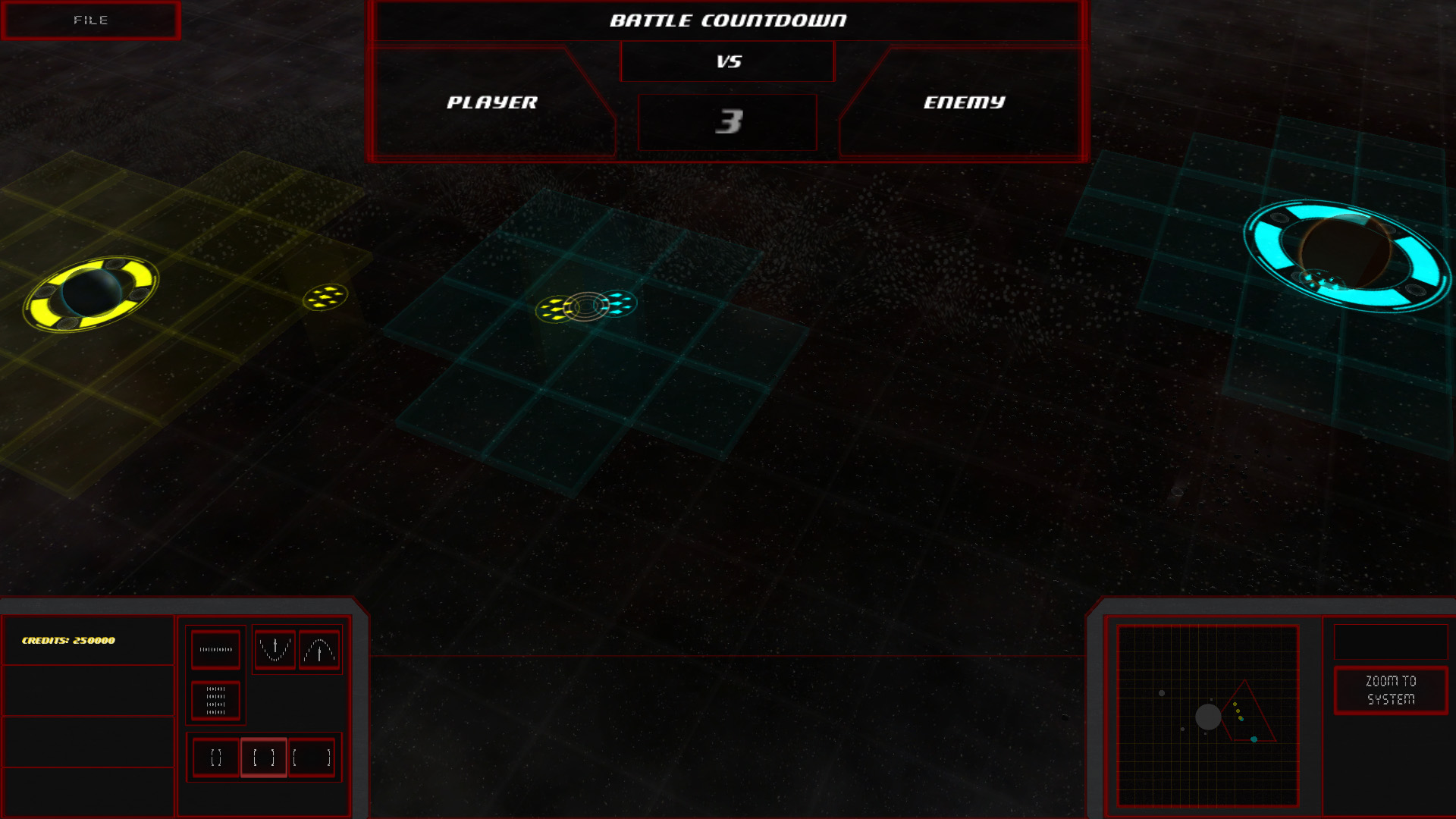 In the above screenshot, the yellow player and the cyan player both control a single planet, granting them control over the surrounding territory. In between these planets, a battle between two of their fleets has just started, (note the battle countdown, which gives other nearby fleets the opportunity to join in the battle) which will give the winning player control of the sectors within the smaller radius around that battle marker.

One of the main reasons for adding Solar System mode was to increase the game's longevity and add an additional layer of strategy for those who want it. (Playing the same skirmish over and over can get boring after a while.) System games are meant to be a longer experience than a normal skirmish and give the player a sense of progression, in what is essentially a mini-campaign or a series of skirmishes.