Finishing up the 2nd playable faction in Empyrean Frontier.

Since the last update I've been working mainly on finishing up the majority of the ships and building modules for the second playable faction, the Interstellar Union. This faction shares some of the same unit types as the first faction, the Empire, but also has some key differences. In the game's lore, the Union is a nomadic faction occupying a number of star systems on the outskirts of the Empire's more developed territory. Instead of building space stations around a central command center, the union uses the Command Ship, a more mobile vessel that has a limited number of upgrade nodes on which to build modules such as shipyards and refineries. 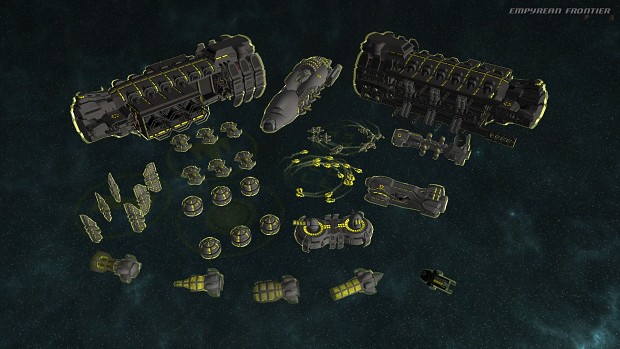 To allow for faster expansion, union players start the game with a command ship that comes equipped with a Capital Shipyard module, which allows the construction of additional command ships, as well as slow moving defense platforms and, at higher tech levels it can produce various combat cruisers. 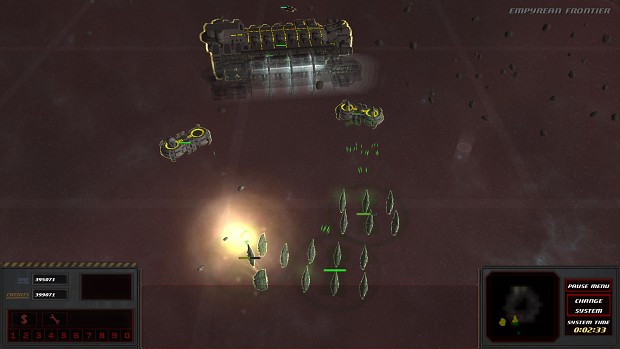 Some of the new ships closely resemble those found in the other faction's arsenal, with minor differences. (For instance, the union's green "shotgun" lasers send out roughly the same number of bolts per minute as the empire's Gatling lasers, meaning they both fulfill the anti-fighter role.) When designing the ships, I did also try to keep some similarities in the overall shape of ships that fill the same combat role. For instance, the anti-fighter frigates are both tall and thin, tractor beam frigates are round, and anti-frigate frigates are longer, like a traditional ship. The reasoning behind this is that setting a distinct "look" for each type of unit should make it easier for the player to differentiate ships in battle and plan for the correct unit composition.

(In addition to pushing or pulling enemy ships, tractor beams now also apply a debuff to enemy units, reducing their speed and rate of fire, making them useful in weakening and focusing down valuable enemy ships.)

All cruisers can be customized with a variety of upgradable weapon modules. The main cruisers in each faction have 8-10 weapon slots and special front and rear nodes for utility modules. The union however, has 2 extra cruisers; the artillery cruiser, which comes equipped with a long range missile launcher, and the drone cruiser, a fast attack ship that releases a swarm of destructive drones at short range. Each of these smaller cruisers has a single upgrade node that can be used to specialize in the ship's primary attack (a range increase for the artillery cruiser, and a speed boost for the short ranged drone cruiser) or the player might choose to add a secondary weapon for the ship to fulfill a more general role. Hopefully this choice in upgrades will provide for interesting strategic decisions and allow a variety of playstyles.

I intend to start a Greenlight campaign soon, but for now I still have some polishing to do as well as improvements to the AI, and I'm also finishing up the superweapon for the new faction.