Detailing the most powerful yet controversial type of long-range sensor yet!

While earlier in Beta 11 development I already revisited and expanded Cogmind's selection of parts geared towards information warfare, there was a need for yet another new one to complement the upcoming Heavy class. This time it's a big one with even more (big!) benefits but also more (big!) drawbacks! Introducing the Active Sensor Suite...

(Yes it comes with an unfortunate acronym that will no doubt see plenty of use in the community, but I decided that thematically and logically this full name would most suitably conform to the part naming conventions given its functions so I went with it anyway :P) 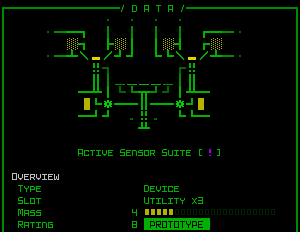 Look at all that sensing power!

As you can see it's a three-slot utility--we didn't even yet have any double-slot infowar, although technically multiple types do work in pairs and require two slots to achieve their full effect. This large slot size is a bit of a negative, although recall that the storage rework did technically free up more potential slots for use elsewhere, so we do want to create even a greater number of options to utilize those.

On top of that the Active Sensor actually can't be removed without destroying it, Processor style, so it's not the kind of device that can be stashed away to keep it safe during hostile encounters (drawback detected).

Although a relatively high-rating prototype, it can still be acquired earlier in the game from the Heavies that use it (so there's at least a reliable source, though this could technically be seen as a drawback since salvaging a Heavy also requires attacking it in the first place :P).

The Active Sensor Suite's main new function is to allow you to see the "desire paths" I wrote about in the previous article. Thematically speaking, as per the in-game description of this effect it "detects long-term residual evidence of prior robot activity within field of view."

In that article the WIP samples were shared in red, but in practice the final color chosen to represent these paths is purple. 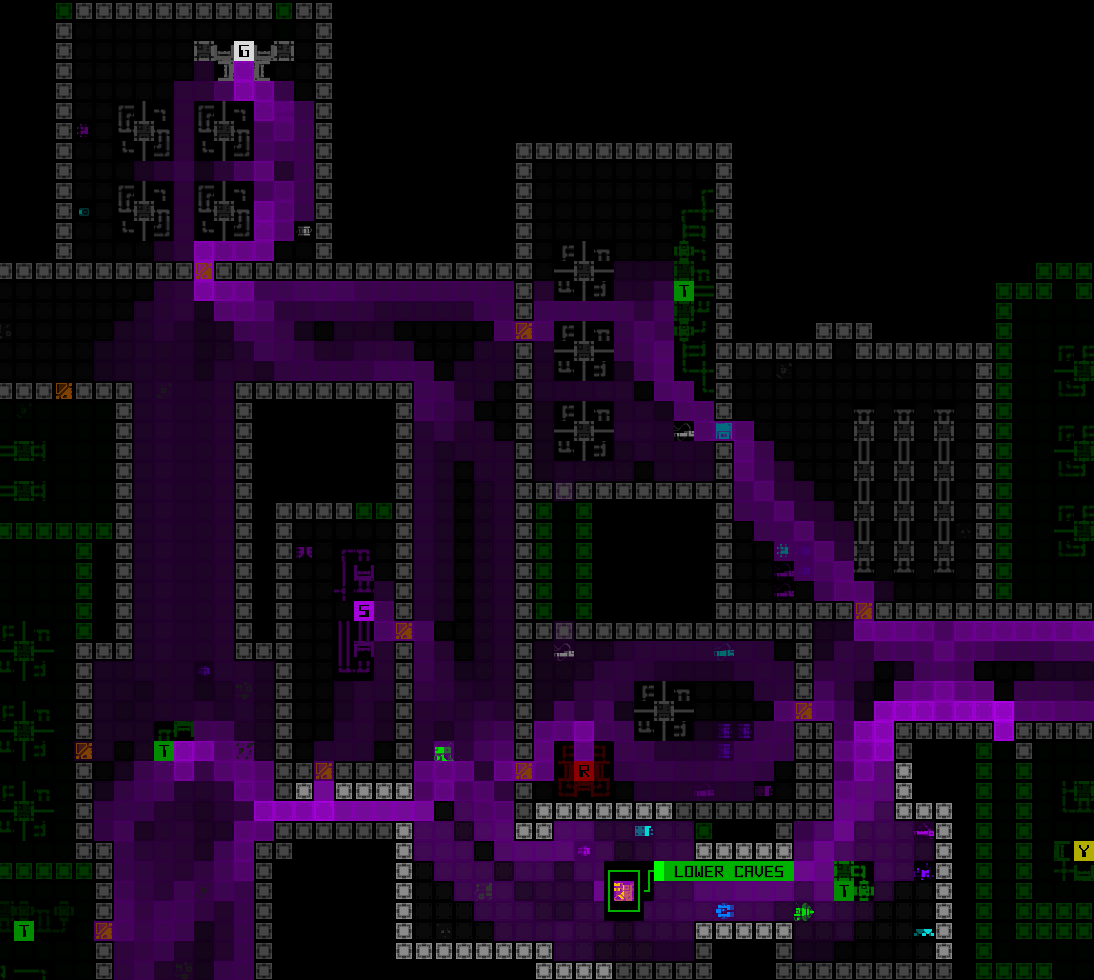 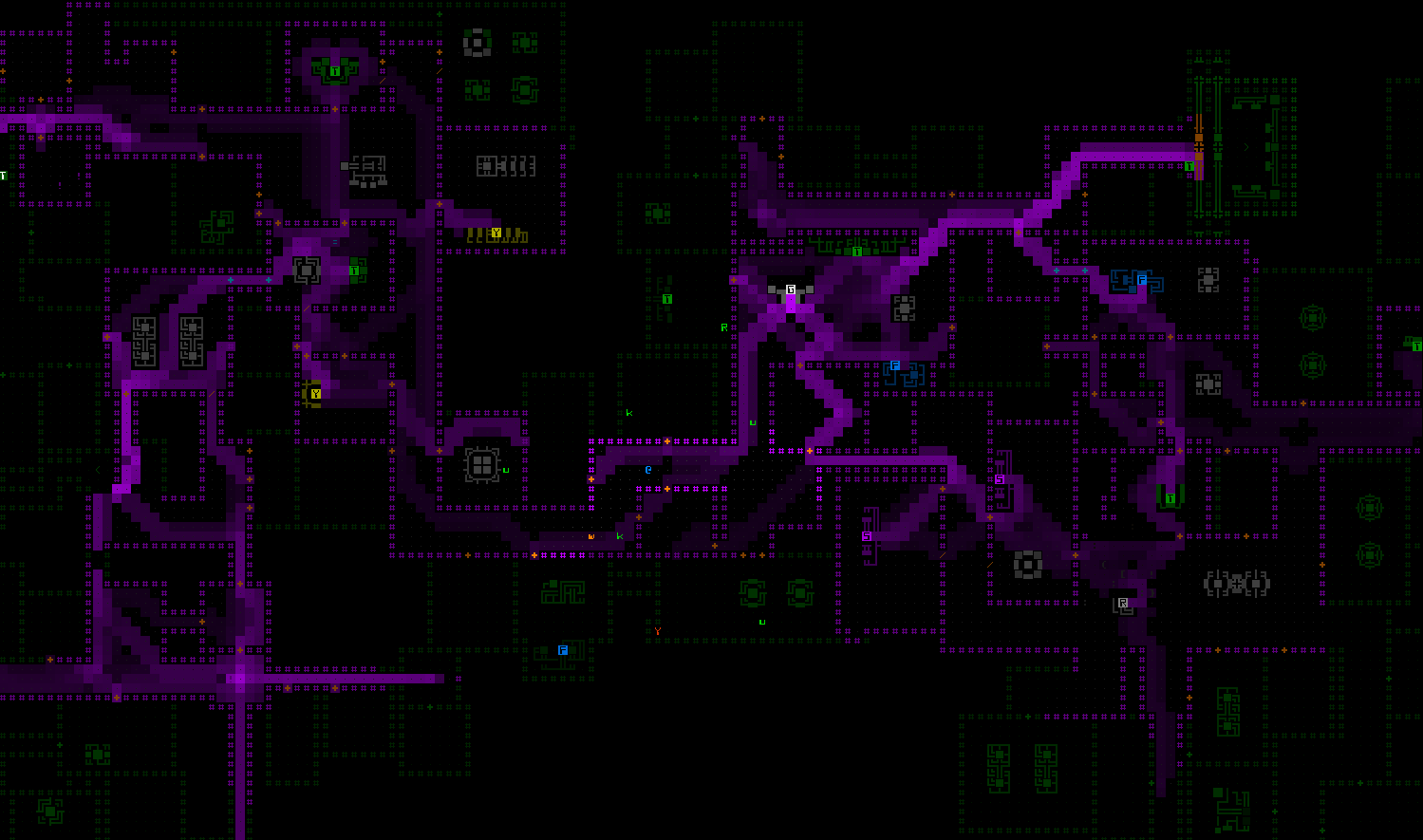 While active, newly discovered path segments are highlighted for a moment (the duration is adjustable) to give an idea of how "heavily trafficked" an area is over the long term, which as described before could be useful knowledge for more quickly locating interactive machines and exits.

This three-slot sensor lives up to its slot count by also simultaneously functioning as both the most powerful Sensor Array and Signal Interpreter available, each of which would normally require a slot of their own and not be as easily available until later. So slot-wise the path visualization functionality only costs one additional slot beyond a standard sensor set, though of course there's also the fact that you can't swap out this utility without destroying it.

These additional abilities are why the activation animation for the Active Sensor Suite highlights a circle (the detection range) and for the first portion uses an animation similar to the signal interpreter animation itself.

Toggling the suite is also how you view all your known/previously discovered paths, since those do not change during your short stay on the map and you may want to reference the full layout again later after having explored more. The length of time they remain visible is adjustable in advanced options, and unlike other toggle animations this one doesn't disappear when you shift the map.

Checking out a wider area of known desire paths extending beyond the map view.
(The visualization duration is automatically extended while panning the map.)

The sensor effect is actually even better than the best arrays, because active sensors are also immune to almost all forms of blocking and avoidance, including even Watcher jamming, Phase Generator scrambling, and Heavy AOE cloaking (more info about that one to come).

Well it turns out 0b10 bots don't really like you so actively scanning the Complex: Using active sensors gradually raises your alert level depending on how many and which bots are within the scanning area, and also intermittently leads to a heightened response from 0b10 in the form of investigations. Security and surveillance-type bots care the most, but any combat bots will report being scanned and the effect adds up over time.

This means it may be more advantageous to occasionally toggle the sensors off when there are certain, or too many, enemies nearby, an approach which is clearly somewhat at odds with one of their main uses, but they're quite powerful overall and big benefits come must with big tradeoffs. We'll have to see how people actually put these to use.

At least this particular drawback only comes into play within 0b10-controlled areas--outside such areas you have free reign to use it without similar consequences.

Next up we're going to profile the Heavy class, a very dangerous new type of security bot :D