Zombies Are South is a quick April Fools joke that we made for our website in 2013. The idea was to spoof the endless runner genre with the ultimate form of entertainment: the text adventure.

Zombies Are South is a quick April Fools joke that we made for our website in 2013. The idea was to spoof the endless runner genre with the ultimate form of entertainment: the text adventure.

I can’t remember exactly when it was that I came up with the idea for it (It was March 9th), but at one point I had an idea that I thought was amusing pop into my head. An Endless Runner Text Adventure. Not to rag on the endless runner genre… there are obviously fans of it; but there’s something about the endless scrolling screen that fails to captivate me. And so I felt that a spoof was in order. 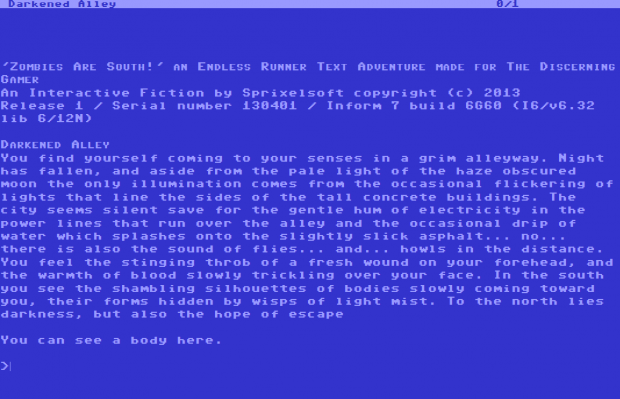 Enter the concept behind our April Fools 2013 game, “Zombies Are South!” which was launched on April 1st. Matt and I had joked about the idea of making some text adventures in the past, and honestly I think it’s still something we might put some more effort into at some point. This game however was admittedly rather rushed as by the time I was committed to doing something for April 1st, I only had a few hours at my disposal to try and whip something up. That means that unlike Matt's work with Super Hematoma, I certainly wasn’t about to come up with a game engine from scratch.

I searched around a bit for some tools that I could use to pull this off rapidly, and came across a javascript interpreter called Quixe and a program called Inform 7. These seemed like ideal candidates. I began reading the docs to figure out how to get started, and it turned out that the tools were rather simple to use. They don’t require any programming knowledge at all really, and so I was up and running in no time. After a few hours of trying to figure out the syntax as well as the actual text I was going to write (if you haven’t experimented with commands, there’s actually close to 2000 words worth of Zombie related stuff to read) I had something that seemed to work. There’s two features I would have liked to include, but didn’t have the time to figure out if I was going to get it out for April Fools:

And then obviously came the need to release the game for the public to be able to play. Setting up a sub-domain and uploading the files to the ftp was obviously a menial task, as was editing the css and html files to get the old school look, but surprisingly I had a lot of difficulty getting the “share” buttons working. There was a bit of a conflict with the game code and the share code which took me a while to find a solution that would work, but in the end it took 13 hours to do that small little joke!

Maybe it’s a little odd that our “first game” ended up being a quick joke project. And strangely enough, while I was thinking that it really was just a joke, it was exhilarating to get something out there and be wondering how it would be received. I admit I had a tough time sleeping as I kept having delusional dreams that it had gone viral and was being shared all over the internet. A little disappointing to see that wasn’t the case, but as you can see from the graph I superimposed on the featured image, we did get a nice little traffic spike on April 1st. It was a neat little project!

Great to see a little bit of text-based fun on IndieDB; I was starting to get worried people here wouldn't appreciate (or at least make use of as a spoof tool) the genre, which is obviously concerning for someone trying to make one.

Yeah, IndieDB doesn't even really have a category for text adventures, so I'm not sure what exactly the audience is here for it. I wonder if there's a better community for text games?