Ljubljana, Slovenia - December 3rd, 2012 - Dawn of Play is proud to announce that Dream of Pixels has the best metacritic score in November 2012, leading over some of the finest games available on the App Store, including Angry Birds Star Wars at #2.

The "10 Best iPhone/iPad Games for November 2012" metacritic post lists these games on the top 3 spots:


Along with the metacritic Best #1 November game, Dream of Pixels collected the following titles and achievements in only two weeks since its release:

"If only I could look up and touch a tetromino-filled sky... Until then, I thankfully have Dream of Pixels."
-- TouchArcade, John Polson

"... a developer like Dawn of Play comes along with a delightful surprise like Dream of Pixels, one of the dreamiest gaming apps on iTunes."
-- Gaming App of the Day - Kotaku, Mike Fahey

"Every aspect of the game has been thought through with care."
-- App of the Day - eurogamer, Tom Phillips

Dream of Pixels is a beautiful falling blocks puzzle game - in reverse! A brilliant twist on the old classic - unpack tetromino blocks instead of the usual packing. Tap on the mesmerizing grid to unpack tetrominos and watch them spin, rotate and fall. Clear the lines from the beautiful cloudy grid fast enough - or it's dream over. 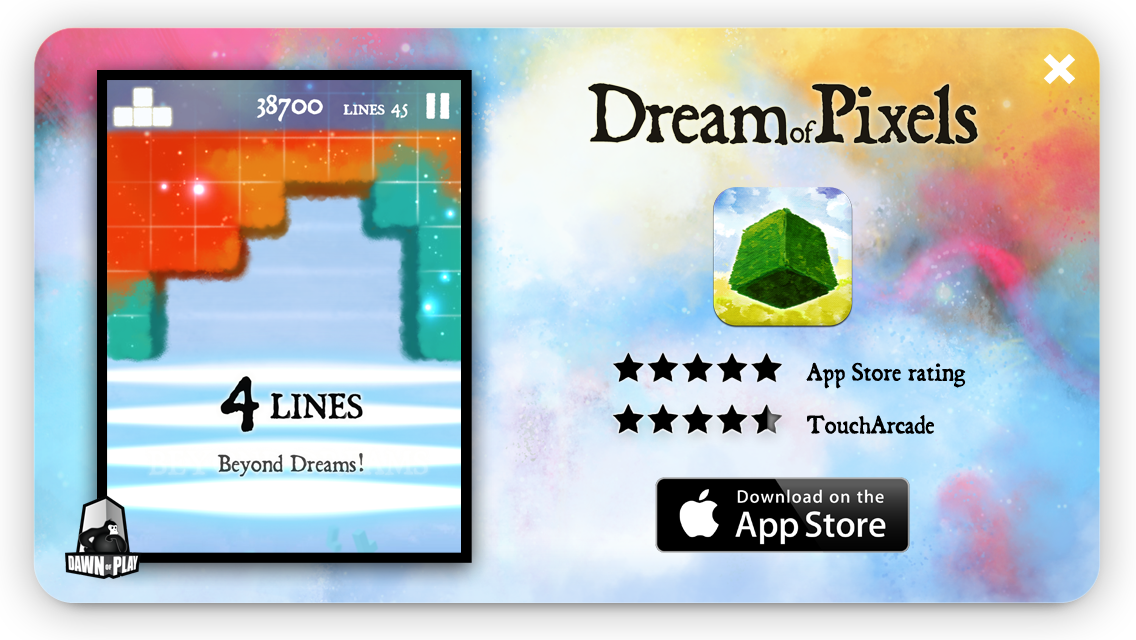 About Dawn of Play

Dawn of Play is an independent game development studio and an amazing team of gamers since childhood. Led by passion we give birth to fun and innovative games.

We believe in gameplay before bling, skill before luck, fun before patience.

I've been playing this a fair bit since it came out. I like it a lot. It's familiar enough, yet different enough that I really enjoy it.