I am sending you folks this invitation to come visit me over for a demo launch party on Game Jolt, itch.io, and Kartridge this Sunday, which is on 11th of August, 2019! See you soon!

Yes, it's true. The impossible is happening and the technical demo of the game is actually coming this Sunday, which is on 11th of August, 2019, on Game Jolt, itch.io, and Kartridge for the Windows PCs!

Finally, after over three years of development, you guys will be able to try the demo for yourselves, but of course, like any other demos you may have played through in your entire life are fairly...short, also probably not that much content worthy, blah blah blah, Stramedia here is not any different...except the demo version that will be available pretty soon has some fair differences! 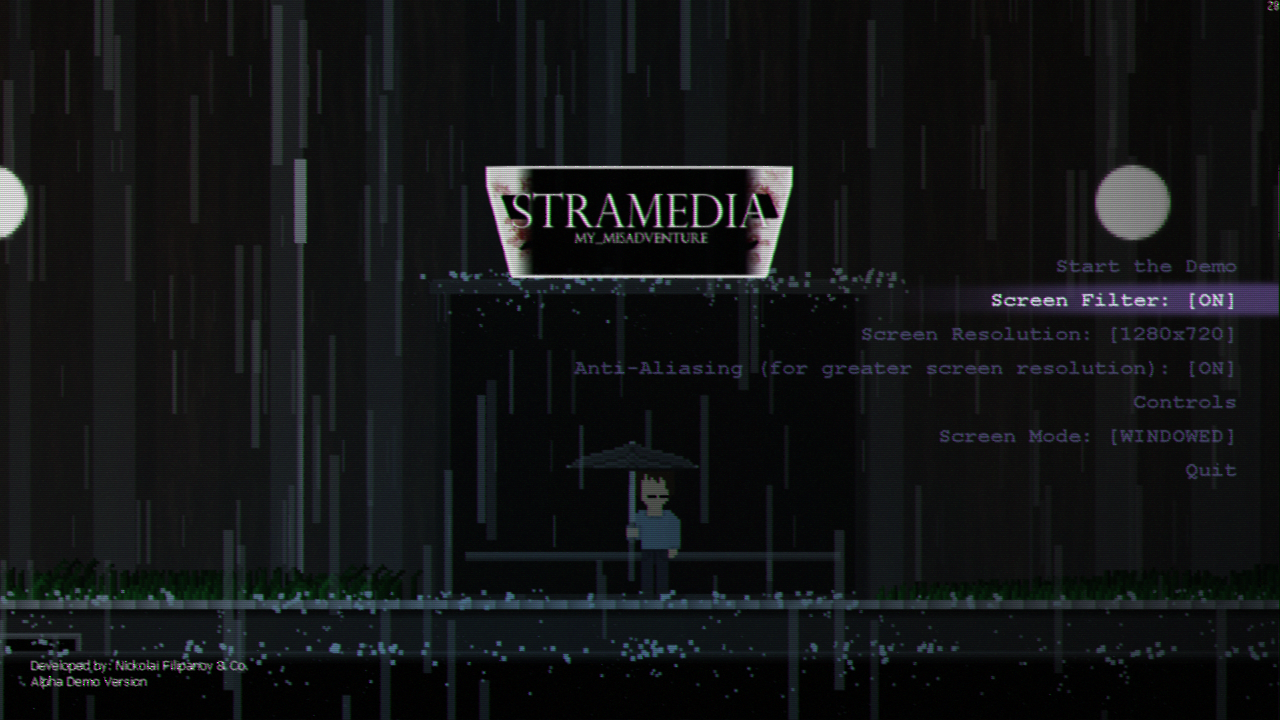 Hey, it wouldn't really be a technical demo if it's main and the settings menus weren't mish-mashed together, right? RIGHT?...

Eh, of course not, it's still gonna be a demo either way, so that probably doesn't matter.

But what REALLY MATTERS is that this...thing should make it somewhat more convenient to fiddle around with to see how exactly to make this game run decently well with the current options provided, such as:

But I am sure you get the idea.

2. I call this the "Three Bear Story Effect".

Nope, nobody touched your spaghetti bowl, infact, you just ate one HOURS ago, wait, no...when was the last time you had spaghetti for lunch?...

But anyway, since the purpose of Stramedia's technical demo is to give a taste of what, for example, is about to come and make sure it runs smoothly on your device, let's just say... somebody did most of the errands for you, leaving the big one for you to deal with.

And by "errands" I mean the first actual puzzle that would require you to use a key item via the inventory system to start up and sticking that sector key in some place elsewhere.

3. As expected, you won't be able to save your progress...duh.

Let's just jokingly say that it's for the anti-exploitation reasons, but actually...this isn't really the type of a demo with a short possible playtime that would save data that could transfer over to the premium version. Infact, it's also a part of the challenge involving in...not dying at all, or otherwise you'd be sent back to the start! So yeah, you can't save your progress in a demo. I mean, why would you want to do that anyway?

...but on the bright side you will be able to do so in the full version!...or when the game becomes available in early access. But the only thing I can say is that the only thing that would carry over from the demo version to a more premium one are the saves settings, so that's at least something, right?

If any YouTubers are reading this and are planning on making a quick let's play video on this game (or feature it in a "(N) Random (Whatever Genre) Games" series, and before that, in any of these case scenarios, I'd appreciate if you put a link to the game in the description, including the link to other games you may have probably played. Sure, not all of us, devs, are that big, but we will really appreciate that, including all the help we can get and also some constructive feedback, too.), keep that in mind;

Stramedia: my_MISADVENTURE's Technical Demo is gonna be actually fairly short, but you probably will only figure that out if you'll know what exactly you're doing.

By that I mean is that the demo itself will roughly
take about 10 to 25 minutes to complete, or, if quick enough, you can try beat it under 10 minutes? But speedrunning won't actually get you anywhere, will it? ;P

Either way, there's gonna be nothing much, so be sure to expect that at least... ^^;

And here's some additional info on the whole Early Access thing, since the cat got out of the bag is couldn't be found.

I don't really like to brag about stuff, but I have been thinking this through for a while ever since I've officially been verified for the Game Jolt Marketplace account and prepared some other stuff up, and came to a conclusion that the first alpha MSRP will be $7.99 USD!

No, not the technical demo, because that's already gonna be free with an option to leave me some tips, don't worry, but it's just a minor update on the whole thing.

So yeah, there you have it, folks!

And that's it for now!
See you this weekend! =D