Alien Arena's CRX Gaming Engine has received a number of major performance upgrades and visual enhancements to boot. Alien Arena can also now be played in both Firefox and IE9.

Since the release of Alien Arena 7.60, COR has been focusing heavily on improving the performance of the CRX Gaming Engine that powers the game. Over the years there have been a number of breakthroughs in getting the game to run as smooth as possible on all hardware, but this is probably the biggest jump that we've had in this area.

Player models are now rendered using VBO, and animated in the GPU, not only allowing for vast increases in mesh rendering, but this will also allow us to release "HD" versions of the models with far more polygons without sacrificing performance. This change also led to us rendering player shadows using shadowmaps, rather than the Doom III style stencil volumes, also leading to a large increase in framerates. For example, in our benchmark, we saw increases over 300% over version 7.60's speed. The disparity increases the more players models are on screen at once. Without shadows, the framerates in the test went from 130 to 470, with shadows - from 60 to 200. We also made huge improvements on the bsp rendering speed. In many cases, map rendering speed increased over 80%. We expect to make even more gains here before our next release.

Another thing we improved, was the appearance of shadows. Using a fast, 4 sample PCF method with dithering, we were able to achieve natural looking, soft shadows, as seen below. 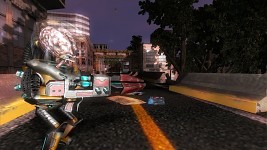 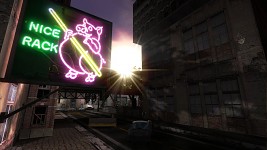 We are also working on hi-resolution lightmap files, which greatly improve the look and feel of static shadows. All of these changes can be expected in the next release of the game which will be in the not too distant future.

Many of these engine changes are to improve Alien Arena, but it might be a good time to mention that COR will be reviving Alteria, completely revamping it using the CRX engine. For those who don't recall, Alteria was COR's first released title, in 2001. The game was a hybrid of RTS and FPS, with a gothic/medieval theme. The game will be using completely new artwork, but we will try to retain the features that made this game innovative and fun. There is no timetable on the release as of yet.

In other Alien Arena news, we have secured sponsorship from Kingston, Heat Gaming, and Western Digital. On top of that, a company called Roozz has ported Alien Arena to an app that runs the game in the Firefox and IE9 browsers. While there are some kinks to still work out, it offers a new method of installing the game and playing. Alien Arena was also recently at Dreamhack, and will also be there again later this fall. There will be some more news soon, as details get ironed out.

Yup, that is the plan in the near future.

Nice to see AA has picked up, especially since the forum upgrade.