This update is mainly about adding tribe colours and tattoos.

Posted by PokingWaterGames on Jan 26th, 2016

Continuing on from my last video, here is a new one on prosperity, influence and crafting in Tribe Of Pok:

This update is mainly about adding functionality and fixes rather than gameplay changes. You can now select the colour of your tribe members and give them a tattoo to distinguish them from other tribes' members. They can be any colour you want simply by adjusting the RGB values on the World Generation page. The tattoo can be selected from a range of presets (currently using placeholders).

At this point I thought it would be interesting to turn this "tribal colour" into another layer of gameplay. When your tribe meets a foreign tribe for the first time, the tribes know nothing about each other. They make judgements based on first impressions, which is where their colour comes in. Diplomatic relations are affected based on the difference between the two tribes' colours. The larger the difference, the larger the penalty. For example a pure red tribe would tend to dislike a pink tribe, but not as much as they would hate a pure blue tribe. Of course, you can overcome these natural relations penalties by performing actions the foreign tribe likes, as I discussed in the last update. 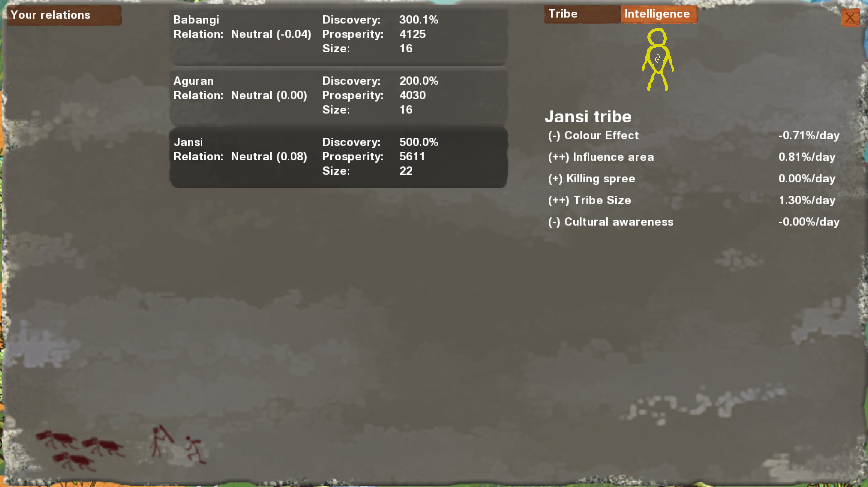 Lastly, let's talk about charts! I enjoy looking at numbers and statistics when playing games, which is why this game itself is so simulation-heavy. Now I've added history charts that track food and prosperity so you can see how they are changing over time. You can access them by clicking on the small panel at the top that shows your current water, prosperity and food supply. I should be able to add more charts e.g for tribe relations without too much trouble in the future.