Bringing Halloween to Cogmind, to scare the hell out of you with 20 new robots and mechanics, and challenge you with Extreme Tactical Excitement at the same time. 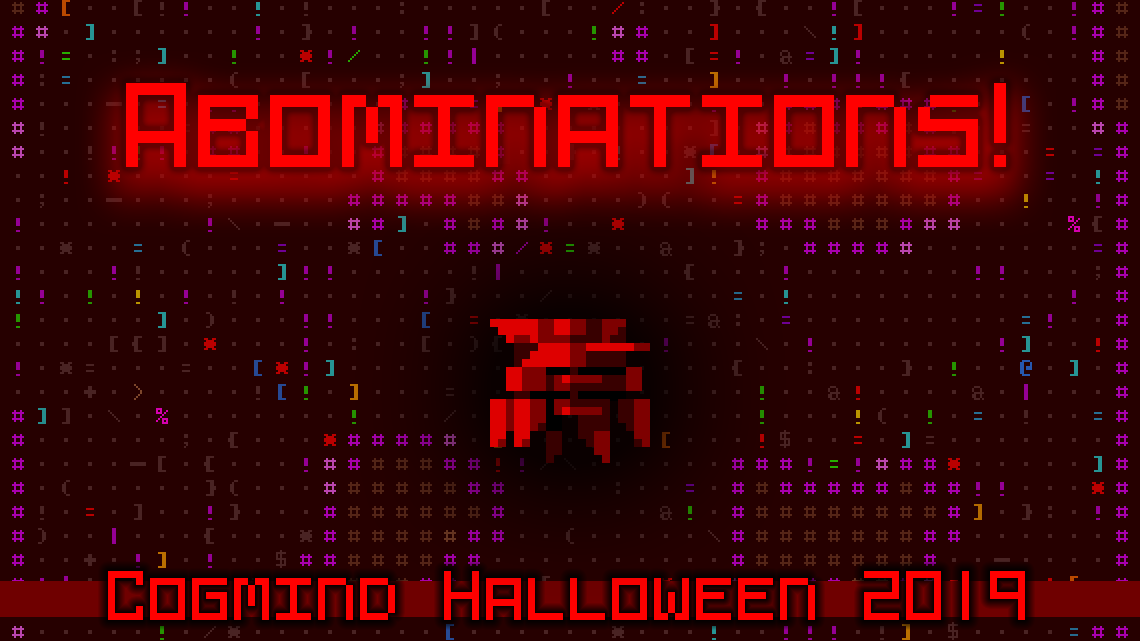 Hot on the heels of our massive Beta 9 update, time for an extreme change of pace...

Beta 9.1 "Abominations!" fixes a few new issues from Beta 9, but more importantly adds a special Halloween event that's been in the works for a couple weeks. This event's special mode includes:

Saves are compatible with Beta 9 so on Steam there's no legacy branch for that release--we're all going straight to 9.1.

As with our several other special events in the past, this one is time-activated (10/31) automatically but you can also force it to activate on any day by adding "-forceMode:Abominations" as a command line parameter when running the game. (On Steam this is handled by going to Properties > Set Launch Options.) If you've done this correctly the message log will show a special announcement when you start the game.

If you want to play a regular run on 10/31 instead of joining the event, you can use the "-noSpecialMode" parameter to prevent it from activating.

(Note that Abominations mode won't activate for anyone who hasn't already finished at least several runs of Cogmind.)

Achievements are not earned in Cogmind's special modes, but you can gain new item gallery entries, and lore technically counts as well (although as you'll see access to lore and plot are very limited in this particular event). As with the Pay2Buy event from earlier this year, Abominations mode could be a good way to add rare items to your gallery that you have yet to discover in regular runs.

I could entice you with more details about the event, but I'd rather the announcement itself stop short of spoilers. Just know that WEIRD things will happen in this mode, and it's not bugs, just try to be observant and figure stuff out ;)

If you don't mind spoilers and just want to read and know everything, I've written in-depth coverage of this mode, both its content and the entire design progress, over on the blog: 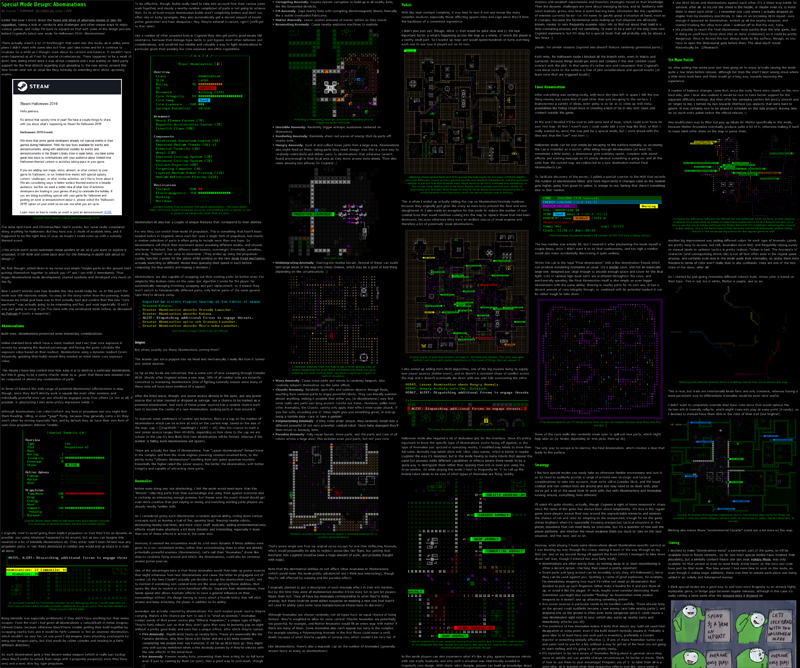 Some special UI QoL unique to this event to be aware of: On-map labels for Matter are filtered out the first time you attempt to label (using the normal label filter features), due to the excessive amount of Matter that will eventually appear on the map... You'll see ;)

Sadly the new leaderboard database isn't yet complete so we won't have a contemporary leaderboard for this event, but one can/will be put together retroactively once they're up and running (so submit scores now as usual to be included in the data).

Testers think it's a really fun mode, and I've already played through a good four runs and defeated the hidden boss in one of them, then going on to try my Abomination strategies on stream this week:

Even if you don't want to play Abominations mode, I strongly recommend you upgrade your Cogmind version to 9.1 as soon as possible since it fixes a nasty new potential crash bug introduced in Beta 9 that can occur if you use a lot of quickloads under certain circumstances.

how can i play old modes?

I haven't actually collected a list of special modes into a single place yet, since they were mostly meant to be timed events. I'll probably do this eventually... actually I guess it's about time to add it to the manual for next release. Right now the manual only covers how to activate the various Challenge Modes.

For now they're only mentioned in the respective announcements from the past few years, as well as in the changelog. The only two other than Abominations which can still be played are "Launchers" mode from AFD2018, and "Pay2Buy" mode from AFD2019, which you can initiate by using the same command line instruction.