Jump lists, new features and loads of polishing, in the latest compilation.

Time for another update!

The current version used a simple format: Major.Minor.Year.Date(mmddd) . This is pretty simple, but sometimes it can be confusing, since I sometimes release patches to the game. So, to conform with Semantic Versioning and make it easier to separate the patches from updates, I’ve done a revision on the versioning. The newer format is like this: Major.Minor.Update.Date(yyddd), for installer and launcher, and Major.Minor.Update-BuildDate for the game. So for example the latest update (0.10.2015.1220) is translated to 0.10.4-20151220 on the new versioning. On the launcher, if I released an update today, it would show its version as 1.10.0.16210 (built on the 210th day of 2016). This is only for convenience, so don’t worry.

When the Disc 1 update hits the mirrors, I will add a few hunting side-missions. Hunting missions are essentially, well, hunting. When you visit the guilds, you will receive a side mission to hunt down a certain creature to receive gold, experience and hunter coins. What do you do with hunter coins? You can upgrade your hunter license, to handle even harder missions and get some extras, such as discounts of healing items, additional weapons and others. Currently, there aren’t many of them, but subsequent updates will add more. There is another type of side missions, but I’ll talk about them later on.

Older versions of the demo kept the entire Runtime Package with the game’s files to ensure that it works. However, since the graphics are shaping up to their final versions, RTP files soon end up being redundant. Alongside replacing audio files with the custom ones, I’ve also removed unnecessary graphics, to save up space.

You may have noticed an entry for the Save Transfer Tool. Well, this was ready before the release and I decided to release it earlier than planned to reserve a spot. You can still transfer the saves (and the settings if you want), but you may want to hold off until a later update coming soon (it will either be Version D0.12 or the Disc 1 Update) to make sure that everything is in place to transfer.

As I continue to renovate the game (in preparation for the Disc 1 Update) I’ve done some refinements on the UI, with new icons and re-adjusting some of the vocabulary and the windows. Here’s a small peek: 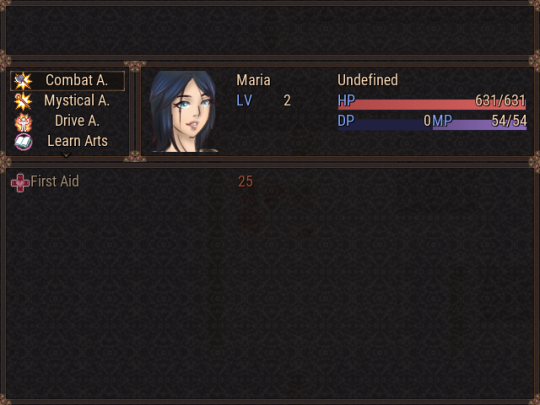 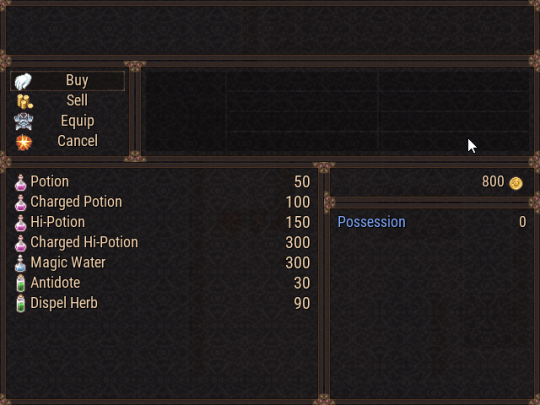 Along with that, I’ve also done some re-works on anything under the hood. For the side-missions, I’ve done re-works on the issuing and checking in completed missions so it is easier to add more missions as easy as possible. So, when a new update adds new side-missions, I can just edit a few lines of code and we are done. There is a need for some things so I can add bounty mission (which may be added after the Disc 1 Update). At first, there won’t be a lot of them, but an expansion might be released (or when the Release Candidate Update is available).

There has been a major improvement on the gamepad support. First, you can use both the d-pad and the left analog stick to move (pick the one that suits you best), in addition to selections in menus. I need to iron out a few more bugs before I can say that it’s ready.

With the Disc 1 Update, I’ll include a few side missions for testing purposes. It will work like this:

-Visit a guild. They will issue both hunter and bounty missions.

-Report back to the guild.

For now, only a few hunting missions will be availiable at the start, but I’ll add more through updates (maybe an expansion too?). What do you get when you complete them? For now, nothing much. But a later update will add the option to upgrade your lisences (you’ll need them to take on harder side missions) to receive discounts on the item, weapon and armor shops. You may even access the Corsairs’ shop for powerful weaponry (Muahahaha!).

There are two notable improvements:

-The diagnostics module has a new and improved check for saving. Previously, it created and deleted a test file to see if it was possible to save. This had two issues: 1. It wasted write cycles on SSDs and 2. it wasn’t easy to catch what was wrong in saving. The new check is more passive. It checks for both free space and for read & write permissions. This is much better to catch the exact issue and it’s more friendly to SSDs. The second improvement the usage of a font that’s easier to read and matching with the font used on the game. The launcher will now use Segoe UI (found on Windows 7 and up) since it’s pretty close to the style of the Roboto font. Here’s a preview: 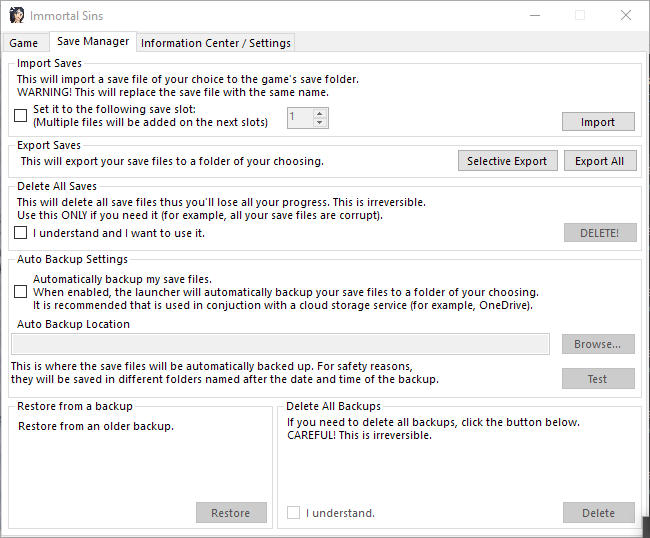 Hopefully this improves the readability a bit more.

I’ve also replaced the snapshot mode with a new mode that keeps only the recent backup. This is useful if you want to use a client for cloud storage instead (I will add native cloud storage support on it when I figure out some things).

That’s pretty much it for some new things. I avoid talking about anything new in the story to avoid spoilers and most of the work on the game is pretty much polishing it for release. I hope I get the Disc 1 Update finished this year. But I have something in the works, now that I’ve installed the latest Insider Preview of Windows 10. Here’s a hint:

Another addition to the launcher on the next major update, is the Jump List. Jump Lists (introduced on Windows 7 and later) are menu options available by right-clicking a taskbar icon or holding the left mouse button and sliding towards the center of the desktop on an icon. Why would I add it? 1. Most of the users are on Windows 7+ versions 2. To better meet the Windows Certification Requirements for the Windows Installer and 3. This will come in handy on a possibly major announcement. Here’s how it looks: 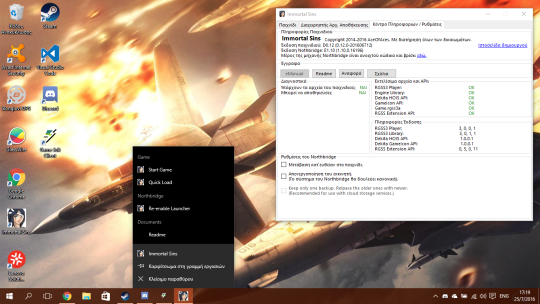 Hopefully this will be useful for you.

That is all for now. See you on the next post.