The upcoming patch for the Europa Universalis IV total conversion mod Roma Universalis is dubbed the "Successors" update, focusing on Alexander the Great's conquest of the known world in 336 BC and the subsequent splintering of his empire.

It's me, The Joker, lead developer of Roma Universalis, and I am here to announce some exciting news during this holiday season: there is to be an upcoming patch for Roma Universalis that we would like to call the "Successors" update!

The Successors (diadochi in Greek) is a patch that will be focused on Macedon, Alexander the Great, and his generals that succeeded him after Macedon's conquest of the Persian Empire. In the patch, the player will be able to watch, or participate, in the Macedonian conquest of the Persian Empire and deal with the consequences of said conquest. The patch includes new events, decisions, countries, national ideas, bug fixes, and a whole plethora more!

Alexander the Great's wars in Asia

There will be an event chain in the mod that will specifically and carefully simulate Alexander the Great's conquest of the Persian Empire. He historically conquered all of Anatolia, the Levant, and Egypt before moving on to deal with Persian emperor Darius III and the combined forces of the vast and powerful Persian Empire in Guagamela, a region in present day Mosul, Iraq.

The player can play as Macedon and fill in Alexander's shoes, a satrapy or vassal of the Persians to either help or fight against Alexander, or the Persians themselves and try to stop the conquest! Macedon has been modified in a particular way to give it limited human and material resources, but they by far have the best military ideas in all of Roma Universalis (perhaps Europa Universalis for that matter). The Persians have a vast and powerful manpower and financial reserve to draw upon, but weak and cheap troops with which to fight. In the end, if Macedon achieves a certain few goals (which will be made known to the player, as the game will guide the player along) they will possess an empire that looks like this: 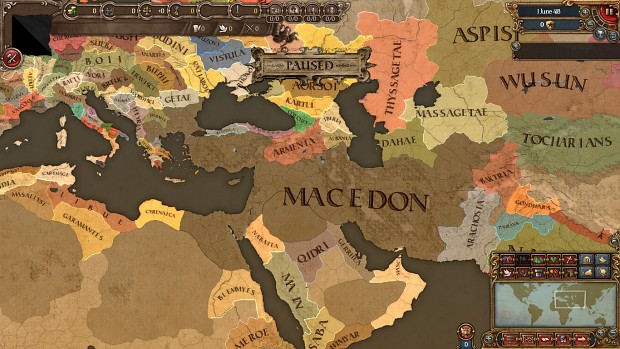 After Alexander's death in 323 BC, he left a Persian wife and unborn child on the throne of his empire, and so, his generals and nobles divided his monumental empire among themselves in an effort to wait for the child to be born. Eventually, the generals became independent of Macedonian rule and began to rule states in their own interests. From 321 BC - 281 BC the eastern world was plunged into warfare, depredation, rivalry, and division. The Greeks fought amongst themselves, draining the resources and manpower of the recently conquered Persian lands. Many historians attest that one of the key factors in the rise of the Roman Republic was the division of the Greeks in this period, who did not foresee the rapid rise of a centralized and powerful Italian state in the West.

The main "Successor Kingdoms", as they came to be called, were Ptolemaic Egypt in Egypt, the kingdom of Antigonus in Anatolia, the Seleucid Empire in much of the former Persian Empire, and the Kingdom of Lysimachus in Thrace: 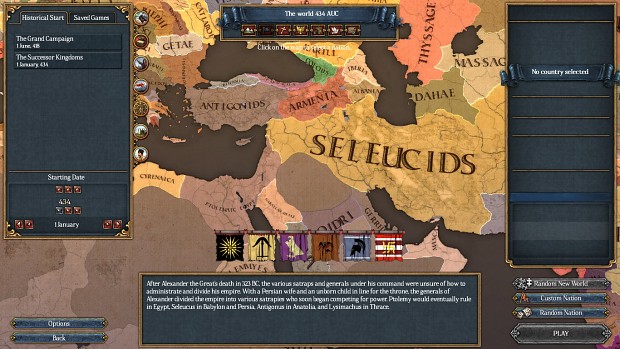 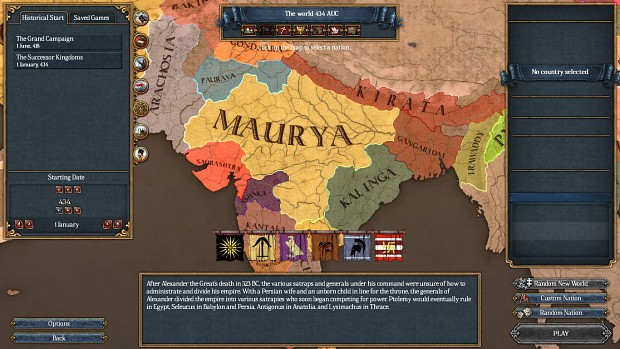 In addition to all the good stuff presented above, we are adding in more nations, national ideas for specific countries like Syracuse and Magna Graecia to name a few, some flavor events for countries like Baktria, and a large development overhaul to simulate the spread of wealth and population during the time period. A full changelog will be presented once the patch is released sometime in the next week or two.

Until next time, happy holidays!