Since the last release Cogmind has made a number of those Top Games of 2015/2016 lists that pop up around the turn of the year, keeping sales rolling along at a minimal pace, just enough to support perpetual development for now :D

Once again, my thanks goes out to everyone for your support, since you're all an important factor in making Cogmind the best it can be.

And with that I bring you ALPHA 6! 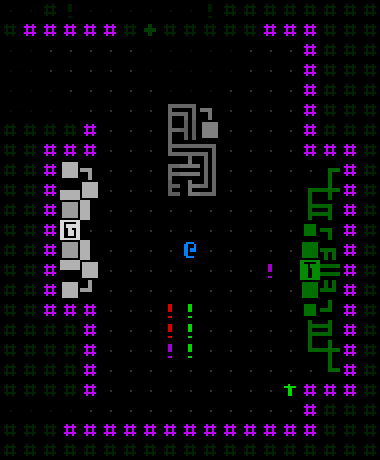 You'll notice more interactive machines, especially in the mid- and late-game, because there has never been enough room to place all those I wanted, but now they can be embedded into walls.

Processors and hackware are now destroyed on removal, so they needed a new color for their drag-drop box as a warning, and are also indicated with a faint colon to the left of their letter. (And of course there's a new animation and sfx for their removal.)

Quality of life: All manual hacking commands are now case-insensitive!

Double your quality of life: All fully-disarmed combat robots are shown at half brightness.

All Field Recycling Units now have completely different behavior. They basically suck up parts from the ground and convert them to matter for you over time. You'll see new indicators on your HUD matter readout when you have one active as well--you can essentially generate matter! 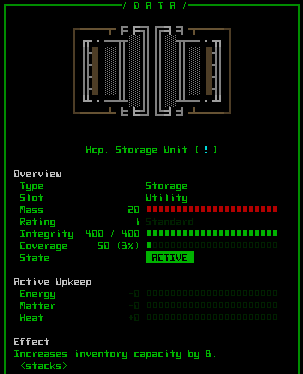 Hcp. Storage Units are no more! Wave goodbye! You can certainly still achieve large inventory sizes, but will have to sacrifice a little more slot space to do so.

Just for fun, the new smallest font is no longer size 10

(As usual I can't spoil the new map areas, otherwise there would be some much more awesome stuff to show here :P)

As a reward for making it to the bottom of this lengthy post... have a bunch of New Year's explosions!

(Note that you cannot do this in game--while working on Alpha 6 I just set this up to record it for fun around the new year.)