On the boat the new aggregate – acoustic station is set. In this connection, the crew of the boat is expanded, new unit – soundman is entered.

On the boat the new aggregate – acoustic station is set. In this connection, the crew of the boat is expanded, new unit – soundman is entered.
Before starting the story about operation of soundman, I would like to tell even about small adding. The new window is entered into the interface – text. In this window all information which crew members want to inform to the player is displayed. As information and other events connected to the boat here is displayed. Besides, the graphic window in which the miniature of the "speaking" crew member is displayed is bound to a text window. On the subsequent screenshots you will watch a miniature of soundman and a remark which he tells to the player.
Now I would like to tell about opportunities of soundman, dependences, and effect of operation.
The acoustic station allows to hear to the horizon on deleting to several kilometers. Having received "noise", soundman will report on contact, having reported an approximate distance, the direction on the purpose and type of the found vessel.
On what possibilities of acoustics depend.
First it is extraneous noises. Operation of own engine, in case of big turns muffles soundman, his abilities decrease. Secondly depth. Yes, the water environment is capable to refract and distort not only light but also a sound. In game there is no exact copying of properties of distortion, is made simply, the boat is deeper, the worse she hears. But why to the player all the time to hold in the head of property of water, noise, abilities of soundman? I decided that let there will be a pointer of abilities of soundman. The pointer shows, on possibility of acoustic station how many is used. And still, acoustics doesn't work if the boat is above. Further, on screenshots, I want to show how different conditions influence opportunities of soundman:
On a panel you see the new pointer, it is noticeable, it is a yellow band is slightly higher than the action buttons. The sense of the pointer simply, the is longer a band, the better soundman further hears.
The boat follows in a surfaced state, soundman hears nothing, the indicator shows zero: 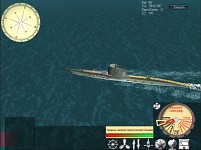 And now the boat is dipped under a periscope, engines are muffled, in this provision of the boat, the pointer almost full! 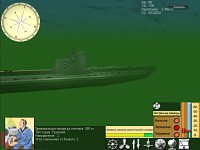 And here on the following screenshot, the boat plunged one many more deeply, you look as possibilities of soundman changed: 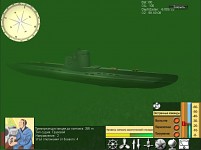 The band noticeably was truncated, the player knows now, abilities of soundman became worse.
And now, we will try deeply, to set full in motion: 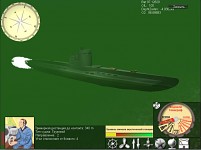 You see it? Yes, soundman almost became deaf! Certainly the course can be reduced and soundman becomes better to hear. I advise, for carrying out acoustic investigation to move on small to a course and at a small depth, it will allow you to find the purpose much quicker.
But the effect of soundman on it doesn't come to an end, our sailor can not only hear that occurs above, it is capable to help us and with attack.
I made small experiment. Having plunged and without lifting a periscope, I carried the boat on the purpose being guided only by official reports of soundman. You watch the official report on screenshots, soundman reports, distance, type, the direction on the purpose, a deviation from a battle course.
As a result, approximately knowing characteristics of an attacked vessel I removed the boat in attack so that torpedoes went precisely to the purpose. And this with the fact that I didn't see a vessel, it was heard by my soundman!
Having brought the boat to estimated course of attack, I made a volley two torpedoes. 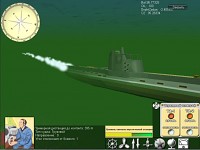 Time, went, I on the former didn't lift a periscope, and at last my soundman reported: 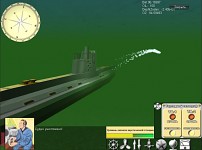 the ship it is destroyed!
Attack was made at distance of 400 meters. The vessel was cargo, went small speed.
I didn't manage to be glad to hit as soundman reported again about the found purpose! 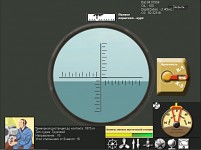 It is yet visible to the purpose, and I already know where it.
Only this time the distance was already more 1,7км. I advanced to the attack again, without lifting a periscope, and having already quitted on a battle course, I decided to lift a periscope, wishing to check indications of soundman with indications of instruments of observation: 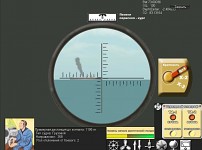 As you can see, soundman has very small error.
And here result: 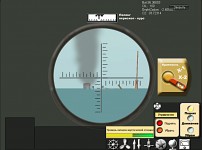 The ship of the opponent once again went to a bottom – glory to acoustics!
And in completion. It is finite not ideal option, but after all on mine quite good attempt.
I while consider up-dating option агргатов and extensions of the list of available modules to installation, on it probably there will be one more dependence – station type. As at a stage of reviewing of possibility of crew – experience. If I after all decide that such adding are necessary, these dependences will be surely implemented.