With a date of 13th December 2013 set for the release of the alpha I'm posting the first real look into the game since 0.5. Let's take a look at the up-coming alpha.

Posted by GreenyGamesStudio on Nov 6th, 2013

I haven't posted an update in a while that contained any solid content updates, but that's because I'm preparing for an alpha release when I enter alpha funding. I explain at the end of this update why now is the right time to enter funding. But now the game is stable, the alpha is coming together I have time and enough content to make a solid update so here we go; Let's take a look at the up-coming alpha.

Graphics Updates
The most apparent update to the game between pre-alpha and alpha is the graphics overhaul. From day 1 I wanted to go down a pixelated road however my skills weren't good enough to pull it off. Although I'm still no Picasso I think they're now at a level where I can create decent looking pixel art so that's now implemented in game. 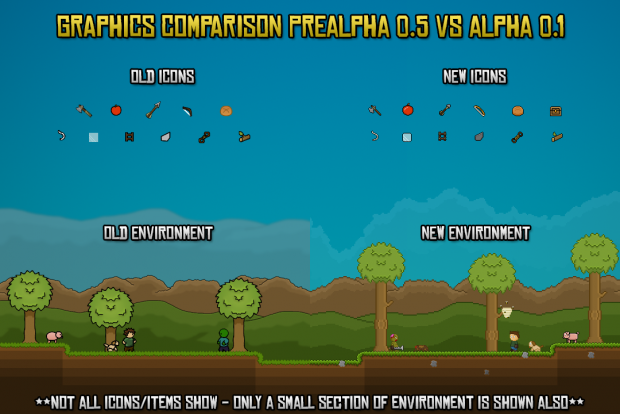 As you can see in the image above while the feel of the game remains the same, and the general style, the art now is much sharper and it really works well in-game in my opinion. One of the positive areas of feedback that I receive is to do with graphics and so far they've been met with seemingly universal praise. I hope this remains the same and people like updates I've done. I certainly do :)

Also, here's a closer look at some of the new icons. I've some of my favorite ones!

Changes In Gameplay - Story Mode
Yup, as well as freeplay and the ability to just do what you want in your sandbox universe I'm working on a story that you can play through. The story documents the relationship between two characters ‘boy' and ‘girl' and consists of playing through their memories in a timeline. Through doing this you learn about their relationship and ... and I'm not saying any more about it at this point as I want it to be a fresh experience when you play through it!

Changes In Gameplay - Freeplay Mode
In terms of freeplay I've moved away from a wave mechanic and gone more towards total sandbox survival. There's a long list of reasons why I've done this but the major reason is I simply don't think it fits the gameplay anymore. I might add in something similar later if people request it, but for now I've removed it and don't think it will be missed.

Other than that the only changes are the addition of new items and features such as chests, sleeping, item tooltips and many more. The video below shows me playing the current build of the game. I don't show everything that can be done, but it's a good look at the new graphics and the feel of the alpha.

Click here to watch my alpha gameplay video.
I tried embedding it but it wouldn't have it.

Optimisation
I develop on quite a powerful machine so I have never had any problems with lag and sometimes that means I overlook it. Boooo I know! Anyway, a large portion of the time between 0.5 and now was the complete redesign of how Samphi loads, generates and saves levels. This SHOULD lead to a much better optimized game!

Also, just in general the coding is getting much tighter. This is my first game so I'm learning by creating this game, however I'm learning a lot at Uni which is helping to make the game tight as shit!

If you want to know more about the changes to the terrain
you can read an article I posted about it here.

Why I'm entering alpha funding and the next release will be paid
Okay so I kind of feel like I need to defend the decision to enter alpha funding? It's really stupid i know but there's different opinions on alpha funding. Some people think it's a great way to give the developers support as most indies don't have publishers giving them cash, and others think its an excuse to sell an unfinished product. I fall into the first camp and always have. It's bloody difficult making a game, especially without any sort of backing. Up until this point development has been a hobby and it's been awesome. There was no 'pressure' i just developed in my free time and put out a free game for people to hopefully enjoy.

Now i'm at Uni which is eating up all my time, I work a job when I can (from home luckily) and that means development on Samphi is suffering. With so much potential in the game I don't want it to continue been just a hobby that I throw my scraps of spare time at. I want to go at it full force. That would mean quitting my job and without some other form of income I can't do that! That's one reason i feel now is the right time; i want to work on the game full time-ish (minus Uni).

The second reason is I want to put some money into the game. I plan on having multiplayer implemented later in development (I'm already working on it) and that means servers, support etc. Websites cost money to run, I want to upgrade GM so I can release on more platforms, have funds to work with talented musicians to create music for the game. It all costs lots of $$$, even for a small game.

So here's the bottom line; I'm entering alpha funding to enable me to create the best game for all. To be able to put all my time into it, work on it full time and create the best goddamn game in the universe. If you don't want to support the future development of the game that's totally your decision and i respect that. I'll be leaving 0.5 up for people to play for free and will patch the bugs that people find so theres a free alternative. If however you do want to support the game, and buy into it early so we create an awesome game together then you have my sincere thanks. I've set myself a deadline of 13 December 2013 to release the game so you should be able to buy it then. Ill be posting updates before then so you wont miss it.

Thanks for taking the time to read this article, and if you have been quietly watching Samphi for a while now is the time to show support. Tell your friend, lover or even your nan! Tell everyone you know and let's make this happen. If you don't already you should follow me and Samphi on twitter for updates @greeny_games | @samphigame and thanks again. See you soon!!