Wild Animal Racing is a exciting go-kart simulation game with a twist. Play as an elephant, a lion, a zebra, a giraffe, a rhino or a hippo! Play against the other animals or against a friend on the same tablet with the split-screen mode! Race your car around tracks in Egypt, Paris and Holland in the World Tour! Drive your car around the coast and around the rim of a volcano! Collect the diamonds for extra speed! Pick up weapons such as rockets, a sledge hammer, or wheel spikes to knock your opponents off course! All in amazing 3D graphics! A super crazy fun game for everyone! * Six characters to choose from! * Two players can play on one device! * Four themed cups! * Twelve unique tracks! * Multiple comedy weapons! 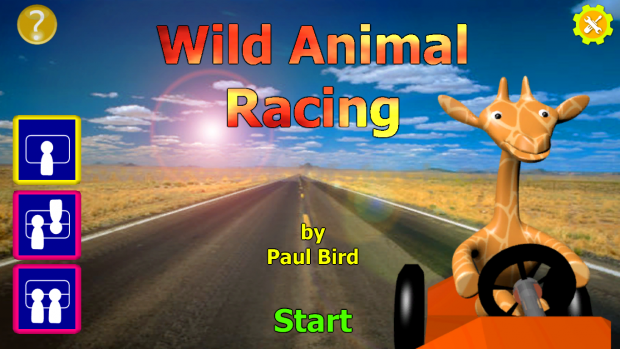 This is the title screen to Wild Animal Racing featuring Ginger the Giraffe driving his car.