A new standalone client has been released with much improved stability, as well as support for both 32 and 64-bit on Windows and Linux. As always, download links for all platforms are available here.

The color palette editor was one of the first UI elements created for Lugdunon over 4 years ago, so an update was sorely needed. In order to provide an easier, more intuitive method for editing sprite palettes and ui colors a complete rewrite of the color editor with a focus on extendability was needed.

Offline play has been one the most requested features for a while now, and it is finally here. In the event that the auth server goes offline or for some reason a player cannot connect to the internet at large, playing on select servers is now possible. 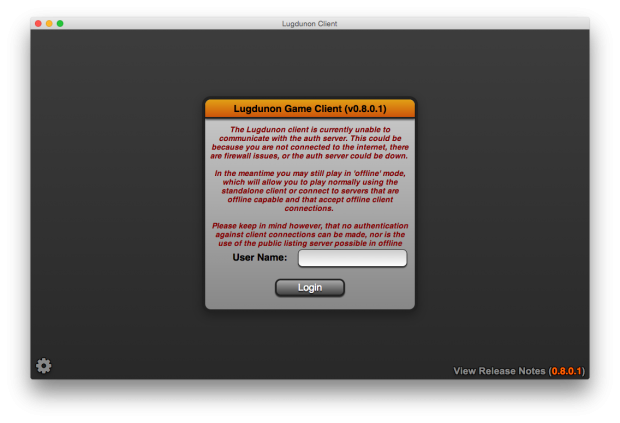 If the client is unable to establish a connection with the auth server, the client will present the player with a dialog notifying them of the fact and allowing the player to login with just an account name. Given that the auth server is unreachable, no verification can be made against the account name's actual validity. With that in mind the server operator has three new server options that can be employed to manage the risks: 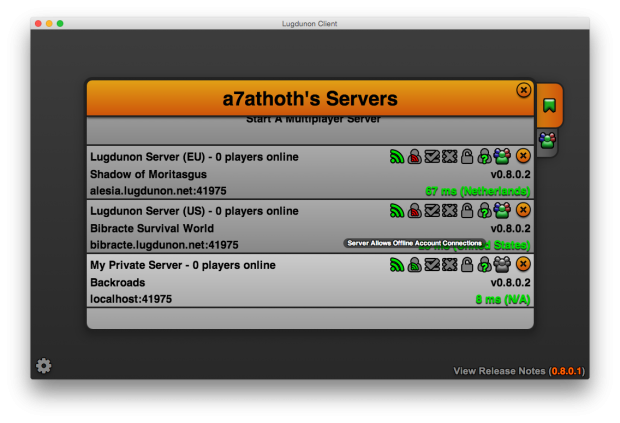 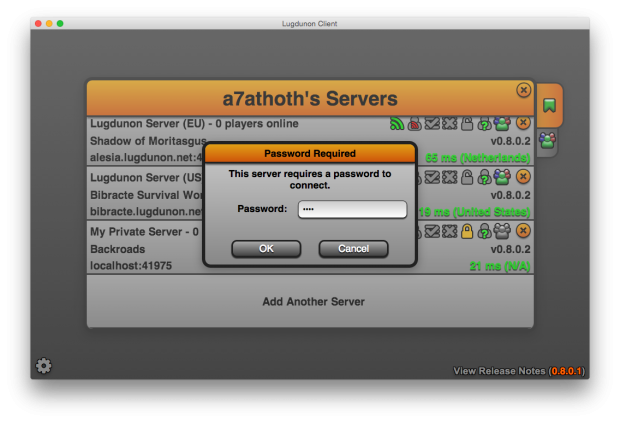 The first new arc-powered item to look at is the loot siphon. This item comes in four grades (copper, bronze, iron, and gold) and on the surface, functions much like a chest or barrel container. However, what makes the loot siphon stand apart, is that whenever a resource gathering operation or NPC death occurs within range and there is no PC directly responsible, the loot / resources will be 'sucked up' by the loot siphon and deposited in its inventory. The items can then be pumped out to another location just like traditional containers. 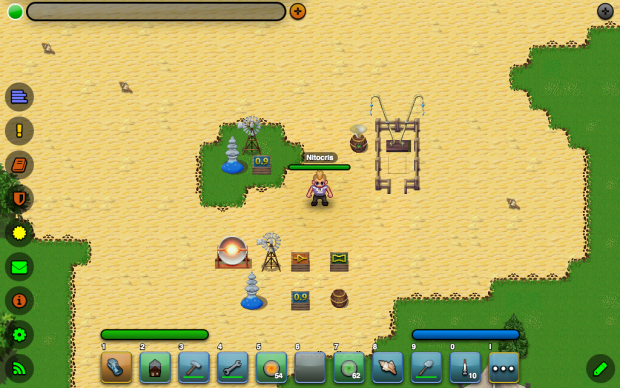 The second new arc-powered item is the Electrifryer. It comes in two flavors: regular and stealth. The Electrifryer, when powered, will deliver a strong electrical shock to any NPC or PC that comes within range, potentially leading to the death of the NPC or PC involved. The stealth model is particularly useful in designing boobytraps for use against other players, but is more expensive to craft than the non-stealth version. In addition to serving as a boobytrap for unsuspecting players, the Electrifryer is also useful(in conjunction with a loot siphon) as a means of automated farming of NPCs.

In addition to the above enhancements, arc switches and pressure-plates are now capable of switching up to 5 inputs to their respective outputs.

A new world.cfg option "default.compendium.crafting.recipe.easy.mode.enable" has been added. When set to true, all crafting recipes in the Compendium Lugus will become available for viewing regardless of whether or not the player has previously learned the recipe. It is also now enabled by default. 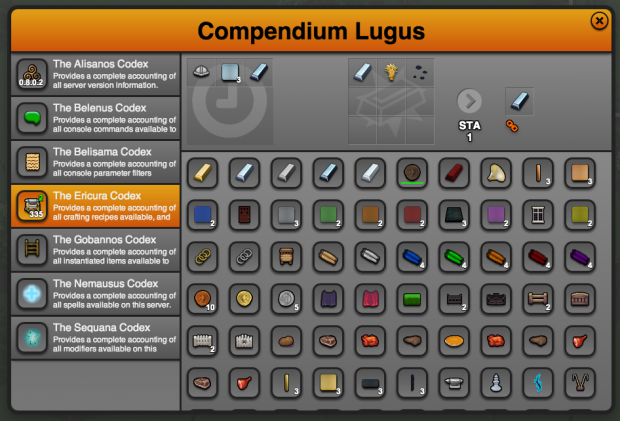 Chat filtering has been added as a settings option to allow players to filter out unwanted log entries by category. Enabling / disabling a specific category's notifications is a simple as toggling that category's button in the "Chat Filtering" settings UI pane. 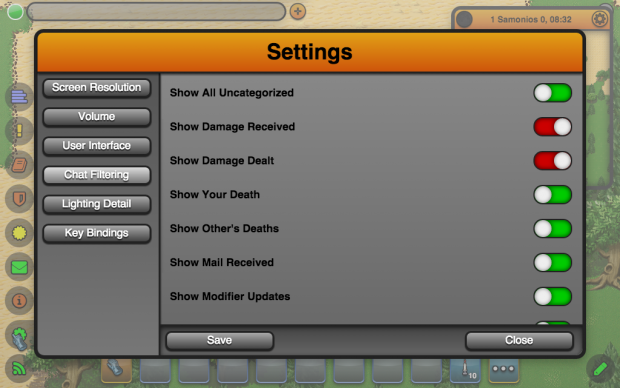 Two new dialog types have been added to provide the player with a little more information as to what is currently happening in the load process, or if an error has occurred.

The WaitWithLogDialog will show a indeterminate progress bar with a text log above it. This dialog is useful in letting the user know specifically what is happening during a lengthy process. It is currently employed in the standalone client's code update check. 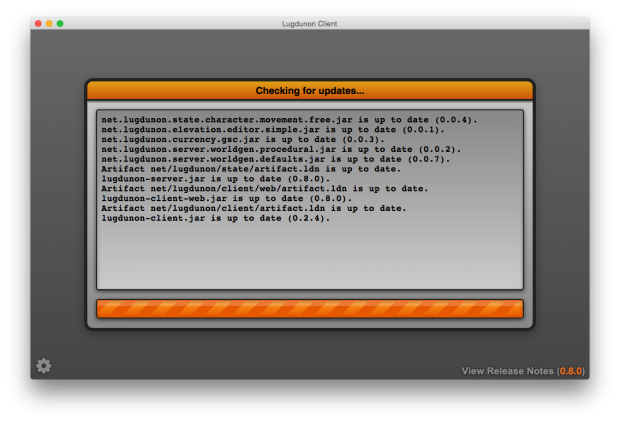 The CopyableLargeTextDialog presents the user with a large text field, with the added ability to copy the text with a single button click. This dialog is currently employed in the standalone client when an unrecoverable error occurs with a child process. 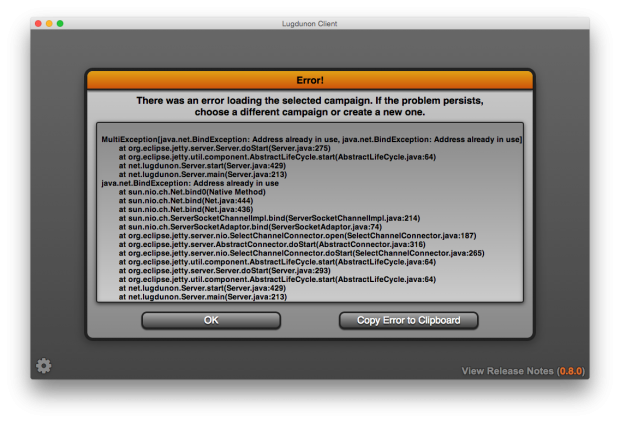 A new API, via the interface INonPlayerCharacterNameProvider, has been added to allow for mod-writers to supply custom NPC name generation schemes. This encompasses not only the custom naming rules, but also supplies the name filter and filter description needed by the UI when a GM gives an NPC a name during NPC template creation.

The default implementation allows for NPCs to have names that will vary at runtime depending on various placeholder values, and built from a dictionary of names and titles that resides in the etc/nonPlayerCharacterNamesList.json file. This file presents a group of name categories that are each composed of a list of names. For instance, an NPC definition with the name property set to "{GAULISH_NAME}+{SUFFIX_FIRE}" will be replaced with a random entry from the GAULISH_NAME category, followed by a space character, and then a random entry from the SUFFIX_FIRE category, thus producing a final name like: "Pixtilos the Flamebinder". 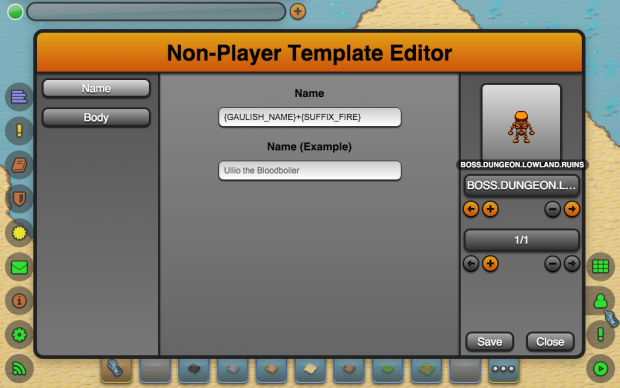 The basic structure of the various naming rules in the default implementation are: 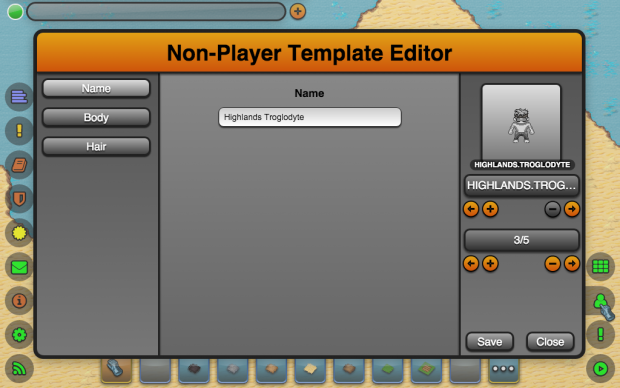 Biomes are now present in Lugdunon. Their primary use is in determining the terrain, elevation, item, and NPC placement in the new procedural world generator, but they do also add a certain flavor to the world at large. Also, the /loc command will now tell you the biome you are currently in, if that location has one assigned.

Support has also been added to the /loc command to report the biome of the current location. 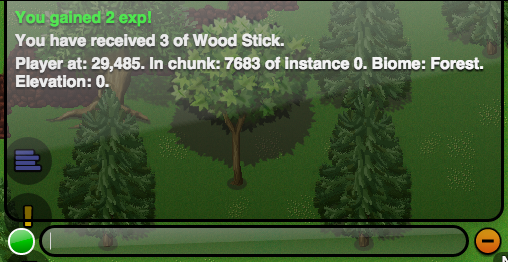 Procedural world generation now allows for players to create an entire, populated world at the click of a button. 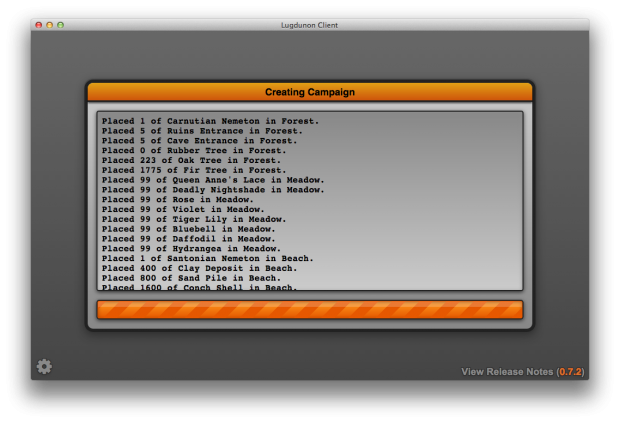 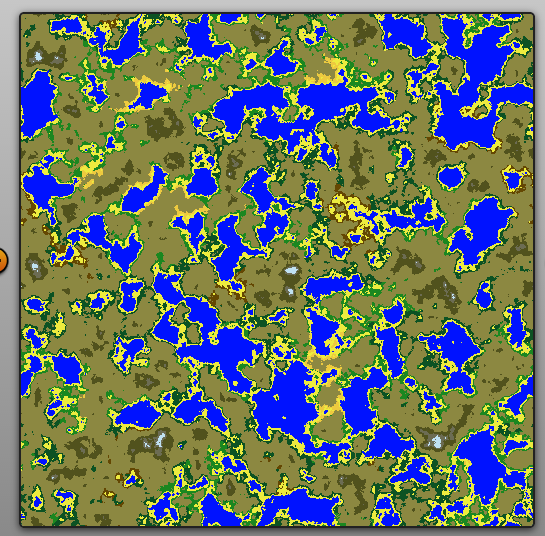 Customization of the generation parameters are possible (with more fine-grained adjustments coming soon) as well as the ability to preview the terrain, elevation, and biomes.

The new procedural world generator also comes with randomly generated dungeons, complete with fog of war, bosses, and reward chests! The underlying mechanism for generating each dungeon's layout, and difficulty is accomplished via the excellent Metazelda library created by Tom Coxon for use in his game Lenna's Inception. 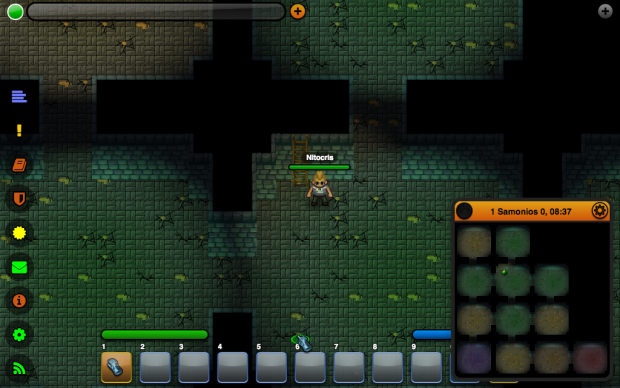 With this in mind, the layout follows a Zelda-like approach, with the room difficulty increasing the further away you get from the entrance and with a final boss and reward room pair as the final challenge and payoff.

When you first enter a dungeon, only the initial room will be lit. Additional rooms will light up when you open a door / gate adjoining that room. Also, the color of the room's light will give some indication of its difficulty.

Dungeons are where the player will come to harvest resources needed in spell casting, such as arcane tome pages and runesources. The final reward chests will also contain powerful weapons and armor not obtainable by any other means.

Dungeons will also 'reset' when unoccupied for more than 15 minutes. The reset dungeon will be different each each time, with unique layouts, bosses, and rewards.

Items can be tagged as a 'dungeon item' and operate under the same restrictions as 'quest items'. This is currently not used but will be in the future. Think keys. ;)

Initial support for phasing has finally been implemented! Phasing allows for the game world to present itself differently depending upon which player character is currently logged in. Full API support is available for modders to use this new feature to create some interesting scenarios. For instance, depending upon how a quest chain progresses, entire villages or other areas of the map could be altered to reflect the player's choices (that are visible to that player only). Currently this allows for shipwrecked cargo instances to only be looted once per player character.

Patch release support allows for incremental updates of server, client, and mod resources without causing incompatibility issues. Release versions will now take on the form of 4 dot-separated integer values (0.0.0.0) with the least significant value denoting the patch release number. If the three most significant values match, then the two release versions are considered compatible. For instance 0.8.1.0 and 0.8.1.5 are compatible, but 0.8.1.5 and 0.8.2.0 are not. 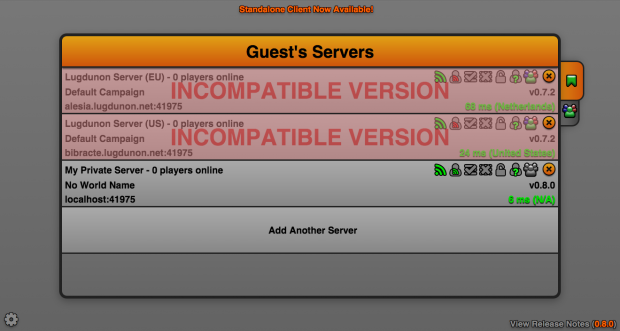 URL parameters are now supported which allow for auto selection of servers, accounts, and characters:

In future releases, this functionality will be integrated into the UI to facilitate faster logins.